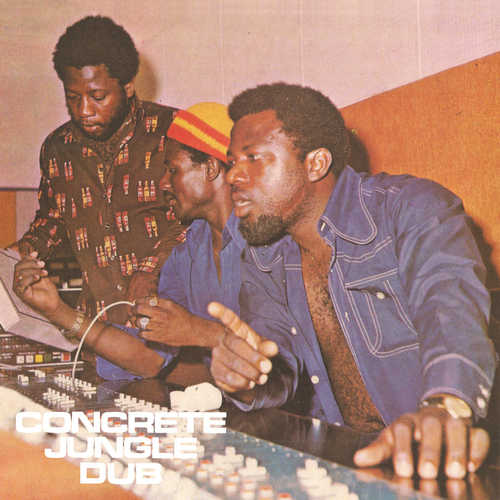 “Dub is just music and a riff and how you feel. From the time it have a proper riff and a proper groove you move! The way you feel is the way you respond to it… I love good music and a good phrase and I like to work with creative musicians.” -- Winston Riley

When it comes the reissuing albums Tokyo based Dub Store Records never ceases to amaze us. After having re-released hard-to-find albums such as Tommy McCook’s “The Sannic Sounds Of Tommy McCook”, Errol Brown’s “Orthodox Dub” and Errol Brown & The Revolutionaries’ “Dub Expression”, the Japanese record label comes up with another rare album. This time it’s a 1976 King Tubby mixed dub album, originally released in the UK as a strictly limited pressing of only three hundred copies.

The original 10-track LP was issued by Concrete Jungle -- a Dennis Harris record label, active in the mid 1970s -- in a white cardboard sleeve (pre-release style). Obviously the name Concrete Jungle is printed on the LP’s label, but apart from the credits and featured tracks there’s no sign of a title for this dub album. So what can you do? Simply call it “Concrete Jungle Dub”.

This 1976 dub set, put out just before the release of dub albums had become a flood, comprises mostly riddims from the late ’60s/early ’70s. The album is often credited as a Winston Riley production, but the Concrete Jungle label actually credits the production to his brother ‘Buster’ Riley. The latter, together with Winston Riley, who had been in the business since founding the vocal group The Techniques, started the Techniques record label in 1968 after they had borrowed money from their mother.

“Tubbys was a brilliant guy… brilliant in his work… and Tubbys would always do the mixing on my tunes. Tubbys was a bit cheap (for studio time) and he’d take the tunes and put them ‘pon his sound. When his sound (King Tubby’s Home Town Hi-Fi) play anything it sell. Them was the radio station in those times…” -- Winston Riley

All tracks featured here were mixed at King Tubby’s studio, 18 Dromilly Avenue, Kingston 11, Jamaica. When you take the sound of the dub versions into consideration, it’s obvious that King Tubby must have been involved in the mixing process. Listening to this collection, connoisseurs as well as devoted fans of vintage dub music will conclude that the dubs featured here are done in a very similar style as Errol Brown’s “Treasure Isle Dub” and “Medley Dub” albums.

Included in this set are some real dub gems, subtly and superbly dismantled and reconstructed. First of all there’s of course “Staga Dub” -- a version of Riley’s most enduring track, the instrumental “Stalag” riddim, followed by “Stepping Dub”, which brings to the fore a vey satisfying dub treatment of Johnny Osbourne’s “Ready Or Not”. Furthermore worth hearing more than once is “Who Is The Dub”, the dub to Donovan D’s “Who Is The One”. And then there are also “Red Gold And Green Dub”, the dub counterpart of Donovan Adams’ scorcher “Them A Mack Jah” and the heavyweight “Dread Dub”, a relentless dubbed up version of Marvin Brooks’ “Cheer Up Black Man”. Also the other tracks are providing nuff dub pleasure.

Conclusion All dubs included on this album drop heavy and are great to hear.