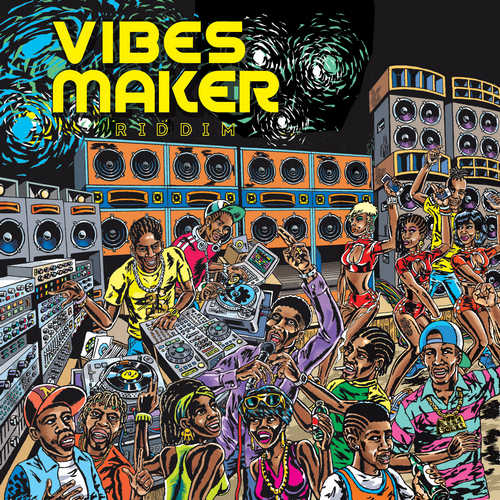 Since he launched Maximum Sound in 1993 and began producing tracks, Frenchie has definitely done great things, producing high quality singles & albums from top a top artists like Anthony B, Beenie Man, Romain Virgo, Mr. Vegas, Capleton, Sizzla, Luciano, Jah Mason, Bounty Killer, Vybz Kartel… the list is endless. But besides that dancehall & reggae fans will also talk about the massive riddim projects he has been putting out over the years. Also that list is endless!

It’s obvious Maximum Sound has a history of doing excellent juggling projects and now, almost a year after the release of the glorious “Skank & Rave Riddim”, which was created in collaboration with Richard ‘Shams’ Browne, Frenchie and Shams are back on track with the “Vibes Maker Riddim”. This new dancehall backdrop with its preset synths doesn’t differ much from the “Skank & Rave” in terms of mood and vibes. So don’t expect it to be an innovative or groundbreaking backdrop. This is just a solid riddim, built with the main intention to remind people that they’re supposed to dance and not just stage-gaze – as clearly expressed in “Ina Mi Blood” by the trio Ding Dong, Qraig & Bravo. And that’s just what it does!

Biggest names are of course Beenie Man and Mr. Vegas. The former does what this dancehall artist has successfully been doing during his career, which has spanned the better part of four decades now. In the hands of Beenie Man, the riddim reaches its full potential. Compared with Beenie Man, Mr. Vegas is probably a more versatile artist, so it’s always interesting to check his cut on a riddim. He’s able to voice a cut a bit different than expected and that’s what he does here with the party tune and title track “Vibes Maker”. Other appealing efforts are Khago’s powerful “Solo”, “Nuttin’ Normal” by Mr. Williamz and “Fling” by unusual suspect Jafe.

Conclusion Probably not a juggling set that will mine gold, but it's a dance floor filler fi sure.