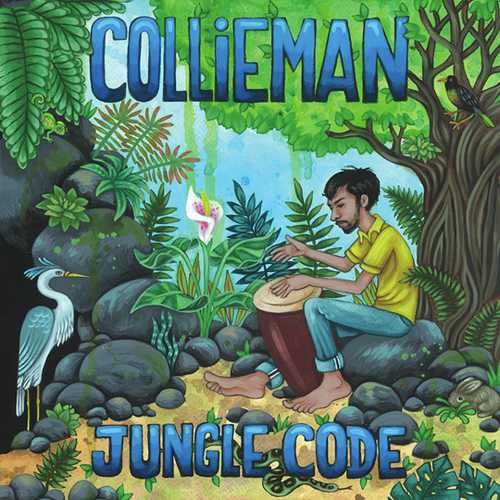 It was in the second half of 2011 that Collieman – in collaboration with the Asham Band, one of Belgium’s tightest and strongest backing bands — put out his remarkably strong first full length album called “The Same Blood”. Since then local reggae followers and devoted fans of Collieman had to be very patient as not much was heard anymore from this extremely talented reggae artist, who surely has the potential to break internationally. However the very long wait – almost 7 years by now – is over!! After a few years in the making, Collieman in collaboration with engineer/producer Manu Genius of Dubshelter Recordings (actually the one who expertly mixed his debut set when he was part of the defunct Not Easy At All Productions) has finally released his sophomore album “Jungle Code”. And the wait has been really worthwhile as this 10-track album surpasses even our highest expectations.

The album, with its overall sonic appeal, gets started with the intriguing title track “Jungle Code”. It’s a stirring message tune full of consciousness, which comes across a great sounding riddim with a beautiful playing horn section. Actually the gorgeous sound of horns is omnipresent on this album, which makes the already well constructed riddims sound so much nicer. The album opener is followed by the matching “The Show Must Go On”, a song that, just like the previous track, treats the listener to noteworthy lyrical content. Also the firm “Still Standing” (“I’m still standing, Babylon can’t hold me down. I’m still standing, them can’t control me now. I’m still standing, Rasta no bending, I’m independent!”) is a very strong offering and the kinda song that gets your head moving.

Next comes the crucial “Political Syndrome”, without any doubt one of the most impressive tracks on this album. A gem for which Collieman also shot a successful music video. The powerful and energetic sounding “Standing Firm” is an amazing track and definitely one that belongs to the album’s highlights. With the nice sounding “Keep The Vibes Alive”, Collieman pays tribute to his reggae family by doing some name-dropping. This tune actually connects the reality tunes on the album with songs that deal with the romantic side of life. In particular worth hearing are “Honey Bunny”, a sweet song in the tradition of UK Lovers Rock, and the infectious “Vanilla Ice” which, although the title might give another impression, is all about ital veggie stew. The album closer “Gimme Likkle Lovin”, together with “Lovelight” and “Honey Bunny”, not only displays Collieman’s ‘softer side’, but also shows that the singer is equally at home with reality and love songs.

Conclusion A mighty sophomore album, that is stamped with quality all over.