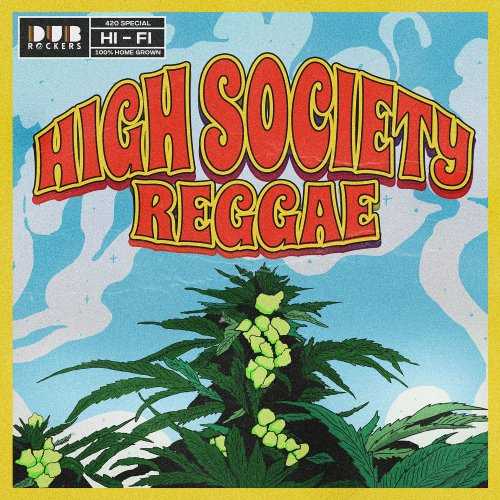 So far, 2013 launched Dub Rockers – a subsidiary label of VP Records that merges Jamaican artists with US and Europe-based reggae acts and focuses on the progression of reggae – has released a few 7″ singles, an EP titled “Reggae Dubs And Dabs”, full length albums by Raging Fyah (“Everlasting”) and The Simpkin Project (“Beam Of Light”) plus the compilation set “Dub Rockers Vol. 1”. And now, in celebration of the annual 4/20 holiday, the people behind the Dub Rockers imprint have compiled a collection of ganja themed songs entitled “High Society Reggae”.

Besides hit makers like Alborosie and Macka B, who already have established their name in reggae circles, the line-up of this set features some interesting artists such as Autarchii, Tenor Youthman from Russia, Spanish singer Irie Souljah and Giark, son of legendary Jamaican producer Bobby Digital. And besides that, true to the mission of the Dub Rockers label, this album also features homegrown bands from the US like San Diego-based Through The Roots, Soul Rebel Project (a reggae/rock band hailing from Boston MA), The Simpkin Project based in Huntington Beach CA and Shinobi Ninja (a genre-twisting band from Brooklyn NY).

Giark delivers a brand new ganja tune, the strong opener “Papi”, which includes members of the Grammy nominated Jamaican band Raging Fyah and great production work from Bobby Digital. Also New Kingston comes up with an exclusive herb piece. New Kingston’s powerful “A Likkle Bit Ah Herb” – featuring Rebelution’s Eric Rachmany on lead guitar – is an awesome herb piece that fires on all cylinders. And then there’s up-and-coming singer Autarchii, who impresses with “Cure My Pain”, a gorgeous song with clever lyrics that keeps you involved throughout. The incredibly great beginning portion of the album brings high quality vibes and sets up for a fine duration.

The Best of the Rest

Both Alborosie, Irie Souljah and Macka B contribute previously released tunes with Macka B’s “Natural Herb”, a song about no chemical weed and legalizing across South Rakkas Crew’s wicked remake of the “Sleng Teng” riddim, being the one that leaves the best impression. However, also Irie Souljah’s “Elevate Your Thoughts”, taken from his 2015 released album “Immigrant”, is worthwhile hearing. Furthermore it’s nice to listen to fine ear-catching songs by Through The Roots (“Bloodshot Eyes”) and The Simpkin Project (the self-produced “Meditation”).

Conclusion A decent compilation with a few real winners.