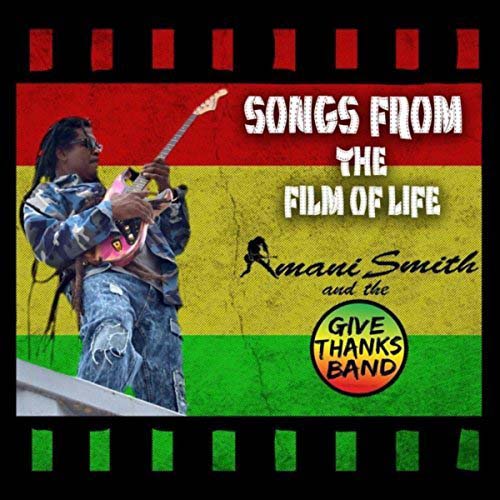 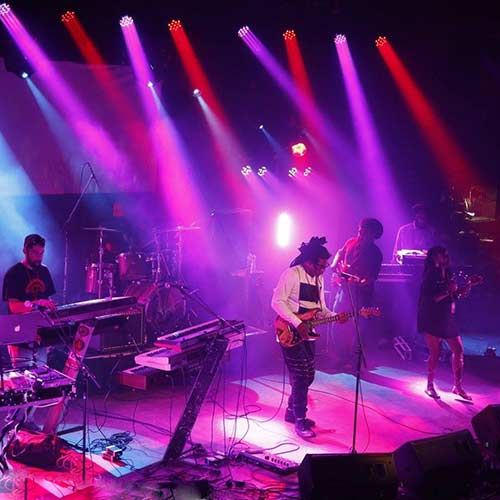 Amani Smith & The Give Thanks Band

Reggae rising! There’s been a slew of reviews from East Coast Reggae bands recently; Rightfully so. After attending the widely successful Chesapeake Bay Reggae Festival (Hampton, Virginia), this reviewer witnessed local artistes and linked with local musicians with Heartical results. The neighboring state of North Carolina is brimming with Royal talent. Talking about Crucial Fiya and AMANI SMITH AND THE GIVE THANKS BAND. The Roots collective (with decades of experience between them) just released their powerful debut album, “SONGS FROM THE FILM OF LIFE.” A totally engaging set with a focus on true message presented with impeccable arrangements and musicianmanship.

Amani Smith has been a mainstay in the industry for 30 years now. An impactful guitarist, singer and songwriter; he’s toured and recorded with likes of The Itals, Culture ft. Kenyatta Hill, Julian Marley, the late Peter Broggs and many more. Based in Wilmington , North Carolina; The Give Thanks Band are a longstanding riddim section with Fyah on the live circuit. Bassie Tony Fisher (a truly kind hearted souljah) is a true journeyman with decades of experience. He’s backed the likes of Edge Michael, Iron Lion, Culture ft. Kenyatta Hill and more. Keyboardist Carl Blackmon, drummer Ken Forrest and guitarist/vocalist are from the hugely successful Signal Fire Band. The Royal sound is rounded out with saxman Benny Hill, percussionist Melvin OC Ire and backing vox from Debbie “Shabbaz” Allah. Riddim tight!

original anthem for sure

The listener is in for a great time on “Zion Train” that features Sean Gregory. The rich riddim is a revisit of classic times. “ZION train is coming, are you ready to get on board?” Amani’s seasoned delivery is upfront with Sean’s vox blending in nice. The band is spot on with Tony’s lilting bass, Benny’s sky high sax and Carl’s ethereal bubbling. Amani’s licks are deep and rich. “New Rootz” is an original anthem for sure. A sure Fyah upliftment with Amani in soulful defiance of Babylon ideas. Impeccable guitar work from this humble Rastaman. The Give Thanks Band are embedded in classic Roots theory with urgent and fresh appeal. Boom! “Rat Race” is tremendous. This is no Robert Nesta Marley cover; original Roots intellect bubbling with thoughtful lyrics and song arrangement. Amani possesses the urgency of Steel Pulse’s David Hinds, but inflects a soulfully Heartical approach that captures full attention. Excellent production with a full and rich sound. Tony’s deep bass is in perfect sync with Ken’s taut drumming-boom!

“That’s Life” is a thought provoking track that showcases the band’s diversity. “Everybody want to be your friend when you’ve got it going on.” A deeply layered riddim heightens the levels, chart busting potential for sure. “Cabbage Patch” is real deal vibrations. Veteran singer Edge Michael (the nephew of Peter Tosh) adds a steppin’ edge to this powerful track. A Reality rocker of Love gone wrong, the two singers are on ZION levels. Riddimatic power pulses along so; instant rewinder! “Winds Of Life” is an acoustic gem driven by Melvin’s Niyabinghi and great strings. Amani delivers a Heartical meditation that displays his broad vocal range. A song of JAH beauty. One can tell that singers and players took quality time to deliver Real authentic sound. “I’m The One” continues the Heartical frequency. A Love track fueled by some serious riddim; backing that sounds like a ten piece band. Each musician blending together in one unity. Amani is a skilled wordsmith all the way; his emotional vocals sweetened by Debbie’s ethereal backing vox. Progressive Roots that will satisfy the most discerning taste.

“Fyah Fyah” is hotter flames. A skanking song of Revolution and true history, this track speaks volumes. Message music delivered Inna masterclass delivery. This is King’s Music, all killer, nah filler. “All Along The Watchtower” is a crucial revisit of the Jimi Hendrix classic. Amani delivers with power, both vocally and musically. Give Thanks Band deliver a musical platform that carries this galong. Standout selection! The set closes with the opener, allowing saxman Benny Hill to soar. He has a style that has Jerry Johnson caliber. So nice to hear this riddim again; Benny is one skilled musician! Put that finger on rewind…

Conclusion AMANI SMITH AND THE GIVE THANKS BAND's "SONGS FROM THE FILM OF LIFE" is a Royal example of what happens when committed veterans come together with manners and respect. Every chapter in this musical book is a must. A very strong debut, the versatility while keeping Roots vision makes this album appealing universally. Go deh!