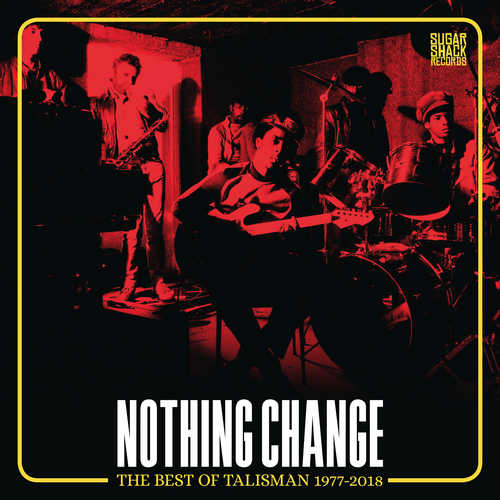 After having reissued Talisman’s 1984 debut album “Takin’ The Strain” and its 1990 follow up “Jam Rock” plus the compilation set “Dole Age – The 1981 Reggae Collection” and two live albums (“Glastonbury And Beyond 1980” and “Live Bath 1981”) on their esteemed subsidiary Bristol Archive Records, which in 2013 and 2017 were followed by the (comeback) album “I-Surrection” and “Don’t Play With Fyah” on their own imprint, Sugar Shack Records now comes up with a 17-track “Best Of” set.

The band had existed in various guises since 1976, when Revelation Rockers was founded by Desmond Taylor and Dennison Joseph. It took slight line-up changes and a change of name to Talisman, before they managed to establish themselves as one of the UK’s finest live acts. Their no-nonsense Roots commentary of social distress and dread observation almost instantly put them on the map. Their poignant song, “Dole Age”, was a direct anthem of the times (still is), which caught the attention of the music world. Though they have gone through a few band member changes, the core remained true. Comprised of Dehvan Othieno (vox, guitar), Dennison Joseph (vox, bass) – note: their musical links span 40 years -, Dennis Hutchinson (keys), Pete Fletcher (guitar) and Reggie Chambers (drums), their sound is undiluted and raw. The band disbanded in 1990, but members remained busy in the music scene. It actually were Bristol Archive Records’ very well received reissues that encouraged Talisman to reform in 2010.

To tell the whole story, this set rightfully includes three Revelation Rockers tracks. Only the solid “Jah Praises” has previously been featured on CD (“The Bristol Reggae Explosion Vol. 3 – The 80’s Part 2”), while both “Culture” and the original version of the awesome “Wicked Dem” appear on CD for the very first time. And then there are all four sides of Talisman’s first two singles from 1981 in the form of the original 7″ mixes of the wonderful “Dole Age”, the gorgeous “Free Speech”, the entertaining “Run Come Girl” and the second version of “Wicked Dem”. Taken from their first full length album “Takin’ The Strain” are the album’s title track, “Lick And Run” and “Ah Wah You Seh”. Three solid offerings with in particular the latter being the one that provides the most listening pleasure.

2013’s “I-Surrection”, for which Talisman teamed up with Rootikal Productions David Hill, is represented by four tracks; “Greetings and Salutations”, “Hey Yout'”, “Things Ah Get Tough” and “Help Yourself”. All these tracks are winners on their own right, with “Greetings & Salutation” and “Things Ah Get Tough” going on repeat. And of course tracks from last year’s extremely well received album “Don’t Play with Fyah” couldn’t be left out. And thus this set includes the tracks “Talkin’ Revolution”, “She Looks Like Reggae” and “Relijan”. While the compelling “Talkin’ Revolution” is a powerful piece and “She Look like Reggae” is a catchy tune that gets stuck in your head, it’s “Relijan” that really stands out. It’s a bonafide roots killer with lyrics that resonate with contemporary relevance as they tell about the huge problems in the world that find their origin in religious beliefs.

Conclusion A great compilation from one of the UK's best Roots Reggae bands.