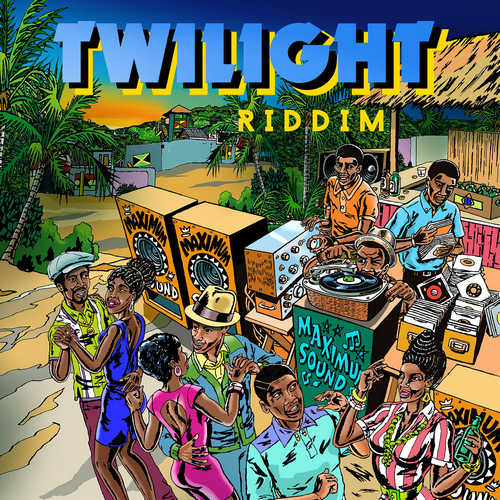 Since comfortably sitting in the producer’s chair, Maximum Sounds’ label boss Frenchie has a string of great reggae riddims to his credit, including “Imperial Crown”, “Jah Blessings”, “The Mightiest”, “Most Royal” and “Praise Jahovia”, to name a few. The gorgeous “Twilight” is his latest, and as usual he has keenly assembled a group of fine, mostly well known artists to voice a tune for this lilting ‘one drop’ riddim.

The intoxicating backdrop is headed by Christopher Martin’s “Bun Fi Bun”. By now followers and fans of this sweet-voiced singer, who won Digicel Rising Stars in 2005, know that he excels at this type of riddims. And that’s exactly what he does, thus making “Bun Fi Bun” one of the riddim’s standout cuts. A real winner with hit potential! It’s always good to hear Etana’s soulful voice gracing a riddim like this. Her spiritual song “Be Alright” is entertaining and an interesting song to listen to, very pleasing to the ears. The opening lot of songs on this juggling offering is rounded out by Sanchez, a tried and trusted hit maker since the late ’80s. The still popular reggae crooner vocally surely doesn’t disappoint, however the lyrical content of “Share The Memory” might give the impression that you’re listening to ‘Big People’s Music’.

Talented Jah Lil, known from tunes like “One Wrong One Right” and “Siren” (both featured on “Strictly The Best” editions 2014 & 2015), leaves a decent impression with his solid lover’s lament called “Expensive Tears”. Duane Stephenson has more than once shown that he’s a real fine vocalist and he does it again with the party vibed “Play That Song”. The singer with a dynamic voice, Lukie D, goes into lovers territory and comes up with “Treat You Better”, also a lover’s lament worth hearing. The versatile Mr. Vegas has often successfully worked with Frenchie and with “Black Princess” the duo adds another worthwhile offering to their collaborations. Kingston-based singjay Krysie deals with affairs of the heart in her decent tune called “I Did Wrong”. With “Bring Heaven Down”, the underrated Ginjah delivers a serious reality tune in which he pleads for peace, love and unity in his community. Before Dean Fraser sax play on “R.A. Super Special” lets this riddim set come to an end, the listener is treated to Shanta B’s well done message tune “Call Di Doctor”.

Conclusion Topnotch 'one drop' juggling project from an esteemed producer and label.