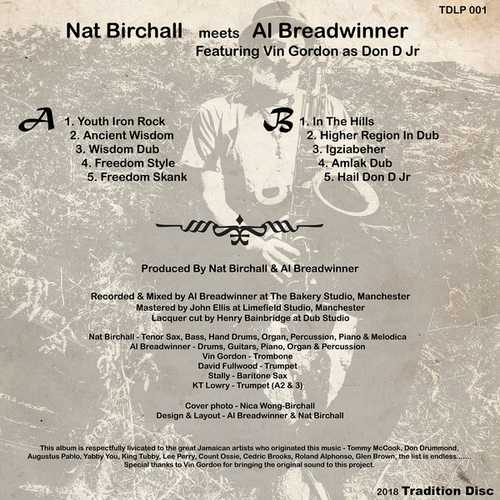 The glorious sounds coming out of Kingston in the 1970s are timeless. Deep and Dread sounds livened up by full horn sections; vibrations embraced to this day. “SOUNDS ALMIGHTY-NAT BIRCHALL MEETS AL BREADWINNER feat.VIN GORDON” is a mesmerizing tribute to The Golden Era. An album that takes the listener decades back but maintains fresh potency…

Al Breadwinner’s focus on absorbing Jamaican music history reflects royally from his Bakery Studio in Manchester (UK) area. Active since 2001, his productions are consistently golden. Al Redfern released “Dubs Unlimited” (2012) to massive acclaim. Using analogue equipment and mixing in the vein of Lee Perry, King Tubby and Scientist; his further productions include “By The Sweat Of Your Brow” (2015) and massive albums with Dub poet Haji Mike and M.L.K. With upcoming works with Milton Henry and Spain Roots chanter Marcus I, Al is cooking up sounds of mighty indeed! It’s only natural that veterans like Big Youth, Horace Andy and longtime Manchester resident Prince Hammer have laid tracks at his studio north of London. A true ambassador of Reggae Music.

This album is an incredible collaboration! Veteran Jazzman Nat Birchall (hailed as one of UK’s finest musicians) linked with Al for his first foray into Roots Reggae. “Sounds Almighty” is the first release on their joint label, Tradition Disc. To create an authentic ’70s Roots Rockers sound, Al cut no corners! Veteran trumpet master David Fullwood (Zion Train, Love Grocer, Crispy Horns and many more) was playing with the Foundation trombonist VIN GORDON (to be discussed later) in London; the duo made the journey up North triumphantly. The riddim section is rounded out by Stally (sax) and KT Lowry; both have shined on Al’s catalogue. Al plays drums, guitar, piano/organ and percussion. Nat is crucial on tenor sax, bass, percussion and organ. Sessions were recorded and mixed by Al with mastering by John Ellis at Limefield Studio. A joint production between Al and Nat.

Before discussing the album further, it’s essential to mention Vin Gordon’s immense contributions to Jamaican music -from Ska to Rocksteady and Reggae. An Alpha alumni, he was tutored by Lenny Hibbert. By 1964, he was embedded in The Skatalites. He was elementary with Soul Vendors, Soul Brothers and Supersonics. His masterclass sound is firm within “Real Rock” Riddim. His link with The Wailers/Bob Marley & The Wailers was concrete from 1965-78. Volumes may be written about this man; his Zionesque frequency is found on countless classics through the evolution of King’s Music. Relocating to UK in the early ’80s; he continued to nourish the soundscape with Aswad’s “Warrior Charge” and elevated the band’s flow for years. In the early 2000’s, he rejoined The Skatalites and is consistently active live or in studio; operating from his outpost in Paris. What a Royal moment to hear this statesman’s limitless mastery in 2018! On a final note, Vin recalled great memories with the likes of Tommy McCook and Lester Sterling after contributing to this album…

“Youth Iron Rock” opens up the album with Glorious tones. The listener is taken back to the mid ’70s up Warieka Hill. Seriously, this sounds like a King Tubby’s slice with taut drums, Nat’s lilting bass (his grasp of Reggae riddim is impeccable) and earthly percussion. Sax, trumpet and Vin’s trombone are triumphant in nature, soaring above Al’s ethereal mix. Real authentic sound! “Ancient Wisdom” is a Jazz inflected Rocker that evokes memories of Cedric Brooks. This is a DREAD riddim with KT Lowry adding sky high trumpet. The hornsmen create powerful arrangements with depth and respect to Foundation theory. Al creates an atmosphere that’s a vivid reflection of the mid ’70s. The whole album conveys vibrations that reflect musical runnings from around 1974-76. An incredible track with fresh urgency.

“Wisdom Dub” is Al at the controls; revisiting the previous track. It gives off a Black Ark vibe, akin to “King Tubby Meets Upsetter At The Roots Of Dub” (1974). The percussive driven riddim is explored through the echo chamber with the hornsmen’s work floating above. Just brilliant! “Freedom Style” is a Rockers delight with Heartical bubbling on the wyah. Nat and Al create a solid riddim with sax, trumpet and trombone sky high. The arrangements are Foundation wise, but evoke moments of early Aswad glory. Vin’s vision is embedded in this thriller! Al’s respect for Foundation tones is remarkable and his mixing techniques showcase his ability to blend that and his original vision. Flawless tracking. “Freedom Skank” is a deep and Dread Dub of the aforementioned. This is excursion with powers. He allows the riddim to flow with chugging guitar, bubbling organ, tasty drums and detonating horn blasts to keep the ambience. Amazing touch.

“In The Hills” recalls memories of Rico’s “Man From Warieka”. The Niyabinghi pulses flow with the flying cymbals drumming from Al and Nat’s crucial bass. This is a sparse yet superb arrangement that lay the platform for pure Heart and Soul from Vin and company. The uplifting arrangements have the power to “speak” to the listener. A Jazzy overlay is the icing on this slice. Boom! “Higher Region In Dub” is a crucial companion. Mystical melodica elevates this Dub; it has the caliber of “King Tubby Meets Rockers Uptown” (1976). “Igziabether” lets JAH be praised. Beautiful riddimwise with Nat, Vin and David in majestic flow. The respect between the trio is omnipresent; no one trying to outdo anyone else. These are thoughtful vibes; a tremendous amount of work put into these tracks. A total engagement of Heart and Soul with Jazz tones igniting the Roots fuse.

“Amlak Dub” furthers this song in a big way. Tubby’s infusion for sure. This Dub could easily fit on “The Roots Of Dub” (1975). The analogue approach is the Rightful method; Al navigating the riddim through echo and reverb with manners that would make Mr.Ruddock well pleased! The album closes with “Hail Don D.Jr”. Vin’s tremendous ability from the get go led him to be given the name – “Don D.Jr” (in tribute to Don Drummond). Nat and Al create a killer early Reggae riddim and allow Vin to pull out all the stops. The atmosphere is Zion calling; Count Ossie earthtones that Al presents with respect to King Tubby. History recalling, history revealing!

Conclusion "SOUNDS ALMIGHTY" is Sounds of mighty and plenty. The culmination of bringing together one of Jazz's foremost musicians alongside a Foundation statesman and veteran musicians is a skillful move by Al Breadwinner. A flawless tribute to The Golden Age of Reggae. An essential addition to your collection. Go deh!