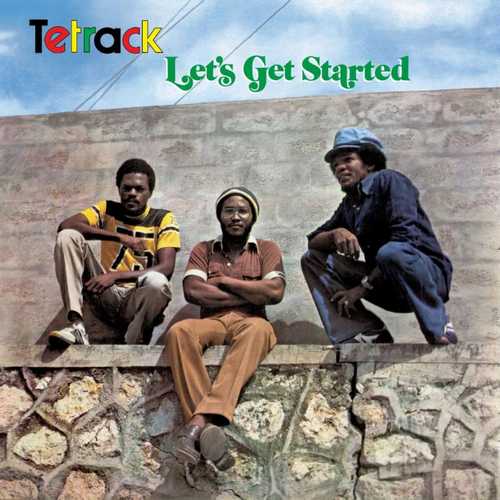 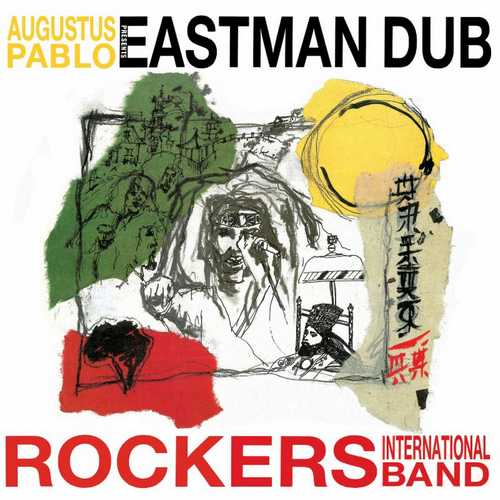 The group Tetrack was formed in 1972 by childhood friends Paul Mangaroo, Dave Harvey, and Carlton Hines, then living near Wareika Hills in East Kingston. They took their unusual – but distinctive – name from a sound system in their area, called ‘Tetrack Hi-Fi’. The vocal trio came into contact with the iconic producer and (keyboardist) musician Augustus Pablo in 1974, for whom they started recording songs. This resulted in this debut album, called “Let’s Get Started”, eventually released in 1980. The first recording was the nice semi-cover “Let’s Get Together”, at Lee “Scratch” Perry’s Black Ark, followed by other songs ending up on this album.

This period is of course the heyday of roots reggae, with more vocal harmony trio’s active, and people who know Augustus Pablo’s sound might be able to form a sketchy idea of what this album could be like, even if they don’t know (of) Tetrack. The Augustus Pablo sound – also called the Far East Sound – is indeed there on this album: laid back, somewhat meditative, atmospheric, and a relatively strong reliance on the instruments the melodica or clavinet, relatively emphasized cymbals, while tending toward minor keys. Producer Augustus Pablo’s trademark instrument, the melodica, is also scattered throughout. Most songs are, however, written by Carlton “Tetrack” Hines.

Hines proves here that he is a good songwriter, while Pablo proves again that his ‘atmospheric’ sound and riddims work (at least for me). The involvement of top musicians (including Robbie Shakespeare, Leroy “Horsemouth” Wallace, Deadly Headley, and, interestingly, Hugh Mundell on percussion) besides Pablo, further provide a “stamp of quality”. Just another good roots reggae record, you might say.

Yet several consider this album even a “classic” of the genre, setting it somehow apart. I’d say it is at least unique, and Tetrack distinguish themselves enough from other vocal trio/groups of the same period (e.g. Mighty Diamonds, Culture, Meditations, the Wailing Souls). The three members of Tetrack take turns singing but, maybe by coincidence, share similarities in their vocals. They all have medium-high tenor vocals (Hines’ voice seems highest), and voices that are maybe a bit “frail”, but, more importantly, also good and soulful. These vocals blend very well with Pablo’s minor-key and melodica-driven sound. This combination results in a rootsy, somewhat ethereal, but also here and there “mellow” feel.

I understand why some would call it a classic, because on top of this solid musical base there are certainly a few strong, standout songs. “Isn’t It Time” is an amazingly beautiful roots gem, also because of its sincere “reality” lyrics. This song’s “vulnerable” vocals actually adds to the feel of this (ghetto) sufferer’s lament, combined with good music and Pablo’s brilliant melodica lines. Also, “Look Within Yourself”, “Judge and Jury”, “Only Jah Jah Know” and “Simple Things” can be called classic tunes. The remaining songs I find also engaging enough, but impress me by comparison a bit less. It’s difficult to explain why. Maybe a matter of personal taste. Maybe it is because they are simpler, or that the vocals do not fit the chosen musical feel totally. But that is all relative, because none of the songs on this album are weak. The difference between outstanding and “just” solid, you can say. Overall “it’s all good”, and part of a pleasant atmospheric whole.

Carlton Hines’ songwriting skills are without a doubt excellent. This album is an early testimony to this. Hines would later write great songs for other artists as well, including the well-known hit “Rumours” (1988) for Gregory Isaacs, and the equally strong “Let Off Sup’m” (1985) for Isaacs and Dennis Brown. Combined with Augustus Pablo’s talent, and the good musicianship, makes this an album that I think roots reggae lovers should know. Especially – but not only – for the beauty of a song like “Isn’t It Time”.

The CD version includes Augustus Pablo’s monumental album of dub versions, called “Eastman Dub”. I tend to be more vocally oriented, so I did not get into most dubs as much. Nonetheless I found that they had strong moments. These dubs also have an interesting musical function as the bass lines and to a degree drum patterns are relatively “hidden” in the mixes of the original vocal songs, and now become clearer, often to good effect. Of these dub versions I most liked the sparse but effective “Eastman Dub” (dub of “Let’s Get Started”), with its brilliant bass line, and the nice, bouncing “It’s Up To Jah Dub” with well-arranged effects.

Conclusion A good record from the heyday of roots reggae & dub.