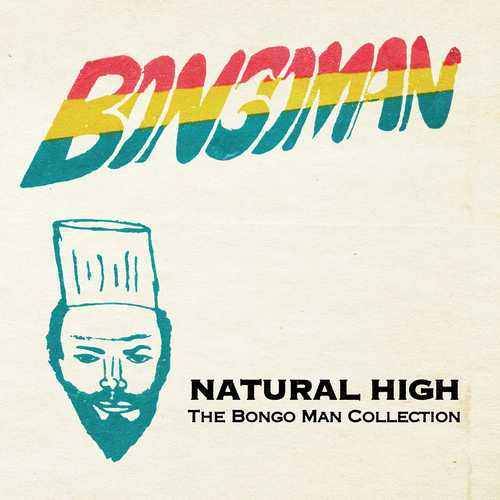 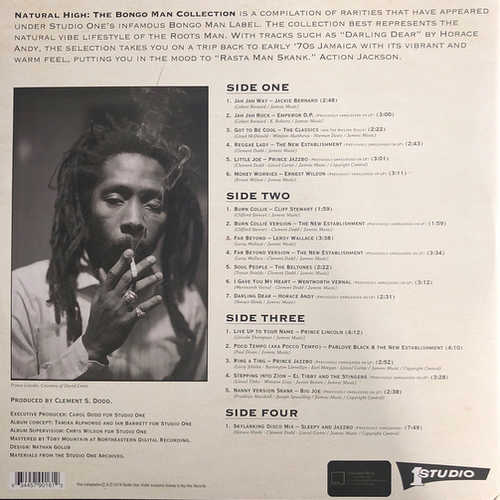 Released on limited edition red, gold, and green vinyl on Record Store Day in the US on April 21, 2018, the 2xLP compilation from Studio One called “Natural High: The Bongo Man Collection” is now also available on CD and on digital platforms. The compilation features a multitude of singles from Coxsone Dodd‘s infamous Bongo Man imprint with half of the songs on this collection being on an album for the very first time. Furthermore there’s a totally unreleased discomix of Horace Andy’s “Skylarking”.

It’s Jackie Bernard, a member of The Kingstonians before he went solo in the 1970s, who opens this Coxsone Dodd produced collection in fine style with the 1972 released single “Jah Jah Way”, which is followed by its answer version “Jah Jah Rock”, the great deejay cut of an artist named Emperor D.P. (of which some say it’s Prince Jazzbo). Winston ‘Pipe’ Matthews, Lloyd ‘Bread’ McDonald, Oswald Downes and Norman Davis recorded a number of singles for Studio One, and were billed as the Classics, in addition to their Wailing Souls name. The group’s vocal power and song writing ability comes to the fore on the 1972 single “Got To Be Cool”, which later appeared on their 1975 released self-titled debut album. The nice instrumental “Reggae Lady” comes from the flipside of the single “The People Skanking” by The New Establishment, a Jamaican reggae band active from 1972 to 1974.

Sound Dimension’s “Mojo Rock Steady” (actually a reworking of Wilson Pickett’s “Mojo Mama” riddim) underpins Prince Jazzbo’s “Little Joe”, which originally appeared on the B-side of Prince Lincoln’s crucial single “Live Up To Your Name”, also featured on this album. Fine singer Ernest Wilson comes up with a decent cover version of The Maytones’ “Money Worries”. Next comes Cliff Stewart’s ganja song “Burn Collie”, followed by The New Establishment’s “Burn Collie Version”, which in some parts has Cliff Stewart’s vocal in the mix. Leroy ‘Horsemouth’ Wallace’s killer “Far Beyond” is a wicked combination of Dub poetry and melodica play. And it’s really great to have The New Establishment’s “Far Beyond Version” included here as well. “Soul People” was written by Trevor Shields, the lead singer of the Beltones, and was recorded by him and Neville Francis at Studio One. The beautiful song of the duo originally appeared on the flipside of Prince Jazzbo’s single “Jah Dread” and was later included on the “Collectors Edition” album. Equally beautiful is Wentworth Vernal’s wonderful sung lovers piece “I Gave You My Heart”, which comes across a riddim with an awesome bassline. And also Horace Andy’s “Darling Dear” is candy for the ears.

“Poco Tempo (aka Pocco Tempo)” is a rare 7″ single with Pablove Black backed by the New Establishment delivering a truly great instrumental piece. From the B-side of Roland Alphonso & the Soul Vendors’ “Blue Dot” comes Prince Jazzbo’s scorcher “Ring-A-Ting”, which sees the deejay riding The Heptones’ “Ting A Ling” riddim in his well known style. The mix also contains the vocals of The Heptones. Not much is known about The Stingers, who recorded tunes for Coxsone Dodd, Lee ‘Sratch’ Perry and several other producers throughout the 1970s. Sir Coxsone released only four tracks of the group with the 1974 released great roots tune “Stepping Into Zion” credited to El Tibby & The Stingers being one of them. Larry Marshall’s massive Jamaican hit “Nanny Goat” is by some connoisseurs regarded as the record that began the shift from rocksteady to early reggae. Big Joe (born Joseph Spalding) then recorded a deejay cut on the riddim created by Boris Gardiner & Jackie Mittoo and credited to the Soul Vendors. In 1974, “Nanny Version Skank” was released on the Bongo Man imprint. The icing on the cake is the discomix of Horace Andy’s eternal classic “Skylarking”, which incorporates Prince Jazzbo’s “Crabwalking”.

Conclusion An excellent compilation... not to be missed!