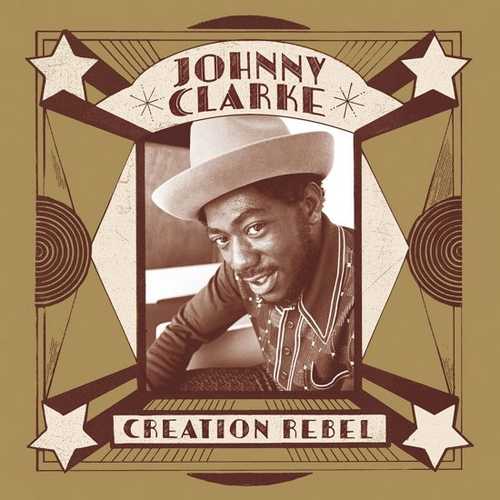 01. Fire and Brimstone A Go Burn The Wicked 02. African People 03. Jah Jah We Are Waiting 04. The Roots Of The Ghetto 05. Roots Natty Congo 06. Love Up Your Brother And Sisters

01. Move Out Of Babylon Rastaman 02. Commercial Locks (ft. Dillinger) 03. Enter Into His Gates With Praise 04. None Shall Escape The Judgement 05. Joshua’s Words 06. Jah Jah Bless Joshua

In the second half of the ’70s, reggae singer Johnny Clarke was one of the most popular singers in the Jamaican dancehalls. Alongside Dennis Brown and Gregory Isaacs he ruled the Jamaican music scene. Despite his huge successes in his motherland Jamaica, Johnny Clarke never gained the international recognition that both Dennis Brown and Gregory Isaacs managed to get outside Jamaica. Nevertheless, Johnny Clarke can be considered as the founder of the modern dancehall style of singing and he influenced singers such as Linval Thompson, Barrington Levy, Sugar Minott and Frankie Paul.

Johnny Clarke was born in January 1955 and grew up in Whitfield Town, a Kingston ghetto area located not too far from Waltham Park Avenue, Greenwich Town and Maxfield Avenue. Early 1973, he recorded a number of songs for Rupie Edwards like “Don’t Go”, “Julie” and “Everyday Wondering”. After that Johnny moved to producer Bunny ‘Striker’ Lee from Greenwich Town who already proved himself as a successful producer, being in the business since the early ’60s.

Bunny Lee was one of the first producers to show how old Studio One and Treasure Isle riddim tracks could be recycled for a new generation audience. Because Lee did not have his own studio, he employed a method of working which was completely different to the working method of other producers. Well established producers like Coxsone Dodd and Duke Reid were able to experiment with their sound unlimitedly in their own studios, whereas Lee had to buy studio time per hour at studios like Randy’s and Channel One. From an economic point of view it was therefore important to keep studio time at a minimum by having the musicians playing a classic riddim track which they already were familiar with and by using each riddim more than once.

During the mid ’70s Bunny Lee led the way with the characteristic flying cymbals sound developed by his drummer Carlton ‘Santa’ Davis to create a different sound than fellow producer Winston ‘Niney The Observer’ Holness had. Lee’s method of working was soon taken over by other new producers like Joe Gibbs and Jo Jo Hookim, who also started to update the Studio One and Treasure Isle riddim catalogue.

Johnny Clarke perfectly fitted in Lee’s method of working. Because he spent so much time hanging around the studios, he became known as the ‘studio idler’, a nickname given to him by Lee. Being around at the studios made Clarke capable of fitting his lyrics onto the new versions of classic riddim tracks which Lee was building with his session band The Aggrovators. Johnny Clarke was offered the opportunity to voice an Earl Zero track “None Shall Escape The Judgement” at King Tubby’s and the song became one of his biggest hits, being popularized by Tubby’s who made the tune an instant soundsystem favourite by running them onto dubplate and selling them to sound systems like the London based Lloydie Coxsone.

In 1975 he released his first album “None Shall Escape The Judgement” on the Total Sounds label, soon followed by another Bunny Lee set entitled “Moving Out”. The following year he signed up with Virgin and the result was the release of two albums, “Authorised Version” and “Rockers Time Now”, both produced by Bunny Lee. He was twice being named Jamaica’s “Artist Of The Year”. He left Jamaica and immigrated to London in 1983, where he continued his successful career with producers like Jah Skaka and Mad Professor.

Many of Johnny’s classic roots recordings gathered here were first given wider international exposure in 1998 with the release of Blood & Fire’s excellent “Dreader Dread” compilation. Some tunes are presented inna extended 12″ mix, very nice! Included are the great “African Roots” dealing about the favourite subject of Rastafarian influenced singers as well as the peace anthem “Peace In The Ghetto”. The all time roots favourite “Blood Dunza” is an horns driven plea for equal rights and justice instead of mankind chasing money and vanity (in the ’70s dunza was popular Jamaican patois for money). “Play Fool Fe Get Wise” is about people who use their brains to outsmart others.

Both “Enter Into His Gates With Praise” and “Move Out Of Babylon Rastaman” were extremely popular roots tunes and were amongst the first string of hits to appear from Johnny Clarke. A deejay version of the latter tune by Dillinger, “Commercial Locks” is included for good measure. What a great tune is the ‘homeland anthem’ “African People”, still sounding fresh after all these years!

Some of the tunes here are 100% Reggae Vibes favourites. First there’s “Don’t Trouble Trouble”, the haunting, horns driven social commentary tune. The dub of this tune is ENORMOUS! “Roots Natty Congo” is a splendid all time roots classic about African roots and black people’s awareness. The hard hitting tune “None Shall Escape The Judgement” provides the powerful riddim for two other classic tunes: “Joshua’s Words” and “Jah Jah Bless Joshua”. Boom!!

Like any other Johnny Clarke album, this compilation is a mix between original Johnny Clarke compositions and covers versions of Jamaican classics. The boastful “King In The Arena” rides the riddim track of Roland Alphonso and The Soul Vendors’ Studio One instrumental “Death In The Arena”. Bob Marley’s “Time Will Tell” gets a fitting slow version, while he turns Peter Tosh’s “I’m The Toughest” into an appealing Johnny Clarke tune “Top Ranking”. “Move Out Of Babylon Rastaman” was the Bunny Lee recut of John Holt’s “Sad News”.
The songs are presented in an attractive package, with excellent liner notes, a few pictures and artwork.