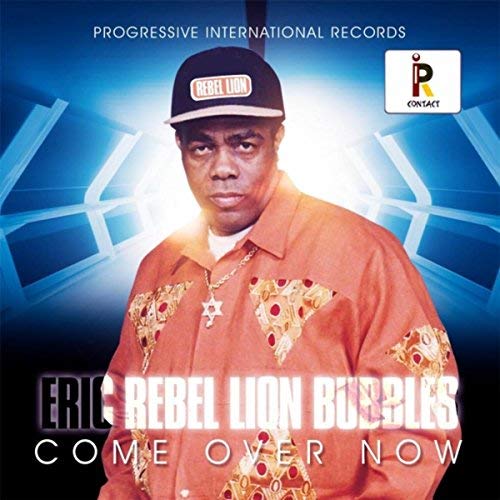 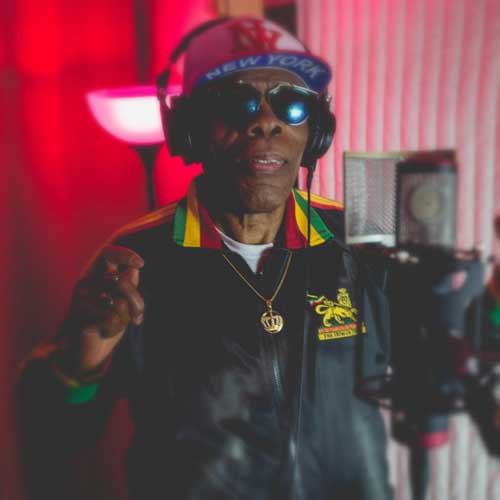 The founding member of The African Brothers. Singer, songwriter, producer, manager. Just a few of the contributions of Eric Bubbles (Derrick Howard) that has kept King’s Music on course since the late ’60’s. This Foundation statesman is in forward locomotion all the while. His latest album, “COME OVER NOW”, bears chart topping elements and continues his clearview frequency on the level…

Growing up in Kingston, Eric spent Youthman days linking with the well established singers and musicians that helped define Ska, Rocksteady and Reggae. Tommy McCook, B.B. Seaton, Roland Alphonso…the roll call is endless. In 1969, he formed the earliest incarnation of The African Brothers (Cornell Campbell and Desi Jones briefly passing through). His vision of bringing a very youthful Sugar Minott and Tony Tuff together resulting in an enduring imprint in Jamaican music history. The trio’s output in the early to mid ’70’s is timeless. He guided the youths proper in the business. His determination and vision resulted in a concrete African Brothers sound. “Mystery Of Nature”, “Lead Us Father”, “Righteous Kingdom”, “Youths Of Today” and the massive “Torturing” ruled the airwaves in the early-mid ’70’s with production from the likes of Rupie Edwards, Coxsone Dodd, Mike Johnson, King Tubby and Eric. By the late ’70’s, the three members branched out and Eric focused on his largely successful solo career. Eric scored massive hits like “Rebel Lion” and “The Roots Of Black People”.

He has ignited the careers of so many artistes. Talking about Errol Scorpion, Color Man, Lady Ann, Nitty Gritty, Johnny P. and Foxy Brown. He was the first to record and produce Everton Blender back in the late ’70’s. Eric is credited for giving Ranking Joe his Royal name (originally Little Joe). The veteran continues to prosper. His 2013 album “Roots Of Black People” is chock full of hits. To this very day, he operates Progressive International Records outta New York. One can find his extensive catalogue; including Anthony Johnson’s “We Want More Lovin’ (an early ’80’s set displaying Eric’s production skills). The mindset is onward and forward with this true ambassador of King’s Music.

“Come Over Now” kicks off the album in fine style. His hearty delivery swings with the progressive riddim and versatile harmony. Lover’s style with Dancehall vein. Boom! “Black Mahagony” can be traced back to the late ’70’s. A timeless piece with Eric in sweetest tones. He has one of the more poignant voices in the business! Riddim and production tight. His songwriting ability equals his vocal power. “Gimme Gimme” is special something. A pulsing Lover’s ode delivered in early Dancehall style. Pure energy from start to finish. Eric evokes the vocal power of Cornell Campbell and Slim Smith. He pours Soul power each and every hour.

“Tears On My Pillow” spent numerous weeks atop the charts recently; rightfully so! A timeless Lover’s anthem with Eric’s full vocal range in effect. A seriously sincere track with top notch riddim and harmony wise. “Fi Mi Gypsy” is also linked back to the ’70’s. Riding “Drum Song Riddim”, Eric triumphs to the ites. An instant rewinder with Soul injection and heartfelt lyrics. His grasp of musical expression is limitless! Eric delivers Roots, Lovers and everything in between with authority; this album focuses on Love light. “How Can I Love Someone” is all killer. It evokes the essence of Jamaican Heart and Soul to the maximum. Flecks of falsetto flow along the vintage Rockers riddim. Standout selection.

Glory to the Sound

“Morning Ride” continues the Royal vibes. Delivering Inna Cornell Campbell caliber, this is a Rub a Dub number that will have one’s finger on rewind. Amazing track. “Silvery Moon Lover” is masterclass ability. Eric’s vocal style is all his own but the power again recalls the greats that he rose up with. A deeply resonating Love story atop a mighty riddim . Glory to the Sound. “Do You Really Love Me Girl” is a later period track in Digital style. This veteran is at ease with any riddim and exudes a Heart strong affair. “Wonderful Sound” lives up to the title. A Sly & Robbie driver, Eric draws in the listener with red roses in the garden. Love light shining so bright. Another instant rewinder!

The timeless “Stick By Me” has been licked many times; Eric gives it refreshed energy. Riding an early Dancehall riddim, the Cornell Campbell levels are in full effect again. Eric has a signature mannerism where his voice drops deep (consider Gregory Isaacs’s “loord”), Eric’s vibe is so crucial!! Lover’s trod continues with “Show Me Darling”. Riding a top ranking riddim, Eric is smooth and deadly all the way. “Good Better Best” features Color Man. A crucial Dancehall excursion brimming with consciousness. A keen eye for talent, Eric has heaps of unreleased material of this under recognized chanter and countless other artistes. “Crying Over Now” has equal vibes that is found on his hit “Tears On My Pillow”. A energetic Lover’s leap with great harmony from Mackiesha.

Conclusion ERIC BUBBLES' "COME OVER NOW" is essential listening. His musical ability and vision recalls the greats that shaped the history of Jamaica music history and culture. Eric is a master sculptor of King's Music. Get this musical disc!! Go deh.