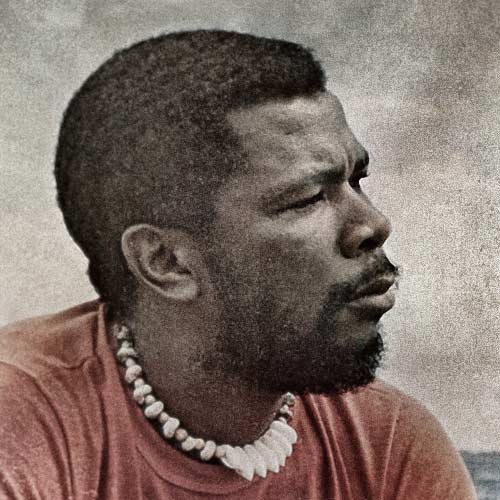 Keith Poppin added to 2018 One Love Festival in Glastonbury, U.K.! This announcement and the release of his new single is the right moment to look back at his 2015 released album, recollecting his finest moments from the ’70s and ’80s.

It’s a prosperous time for Reggae Music. Young Lions on the rise; heaps of releases ripe with quality and consistency and Foundation artists digging into the vaults. After an international search, legendary statesman KEITH POPPIN has compiled a stellar 25 track collection from The Golden Age. “The Good Old Days” indeed; a historic and compelling musical episode that is a true reflection of his genius and the glorious vibrations of the ’70s and very early ’80s.

KEITH POPPIN (Keith Smith) was born in Westmoreland, JA in May, 1949. He has been an integral element in Jamaican music for half a century now. Keith cut teeth at Studio One (and many other studios) in the late ’60s as part of “Rocking Horse”, a short lived group that released a number of memorable tracks. His solo career took off with the timeless, “Same Thing For Breakfast” (1973), “Get Together” and “Envious”. His earliest albums, “Envious” and “Pop Inn” (both Phil Pratt productions) are pivotal classics that are as pertinent today as when first released. He delivered “More Of Keith Poppin” (which marked his foray into self production). He kept busy in the ’80s; releasing tracks of the highest degree. He was the first artist to be signed to Peter Tosh’s “Intel-Diplo” label and a few crucial singles resulted. After settling in the US, Keith set up “KP Productions” and has released a slew of fine albums – “Journeys” (2002), “Get Together” (2007) (a killer collection of tracks from 1970-79) and “Speak Out” (2011) (an album featuring Dwight Pickney, Grub Cooper, Ronnie Davis and Ansel Collins). Keith has worked with every notable musician, producer, engineer and studio in JA and has the upmost respect of the musical fraternity. His live presence is electric (given the name “Mr. Energetic” for good reason!). He tore it up at this year’s Chesapeake Bay Reggae Festival (Virginia, US) and is slated to perform in Spring, 2016 in the UK; an event that will mark his triumphant return after almost 40 years since last performing there!). There’s no slowing down KEITH POPPIN; true example of enduring Foundation artist…

“The Good Old Days” is pure history. Recorded at Black Ark, Randy’s, Federal, King Tubby’s, Harry J’s, Dynamic Sounds and Channel One; these sessions were backed by The Soul Syndicate, Ansel Collins, Winston Wright, Rad Bryan, Lloyd Parks and many other legends. Producers include Lee Perry and Prince Tony with mixing by Errol “E.T” Thompson, Maxie and Lee Perry. The bulk of these tracks are from Keith’s archives but this project couldn’t have been realized without the contributions from Peter I, California based John Skondahl and Colorado based Kelly. This comprehensive collection builds on Keith’s previous compilation, “Get Together”, and fills in the gaps with rarities and unreleased gems.

“Prophecy Revealing” is pure power! Recorded at Channel One with Ansel, Lloyd and Ranchie McClean, it exemplifies his soul power and raw observation. Granite anthem! “Rebel Too Hot” is classic with timeless harmonies and a great example of early Reggae sound in its pure form. “Take It Easy” (“Picture On The Wall” riddim) cools down the pace with a stripped down riddim that allows Keith to ride predominate. One of his finest tracks! “Behold Them” is the essence of Keith Poppin. Pours his Heart and Soul into every note with truth and conviction. “Here I Am” and the version displays his versatility and confidence with upstanding riddim. “Boom Boom” is fantastic. Over a “springheel” riddim, he rides it from tenor to falsetto with ease and is social commentary to the maximum. “Why Make Believe” was recorded right after “Envious” and is a great insight into mid ’70s Kingston vibration. With each song, Keith paints a true picture and the message within really draws the listener in. “Find Her” (Channel One) is pure Love and ranks as one of THE highlights of the ’70s. Instant rewind on this urgent gem. “Dream Lover” was recorded at Black Ark and gives great insight into the early runnings at Lee Perry’s historic studio. A brilliant cut with a version showing Mr. Perry mixing in subtle style.

“Running Back Home” was one of the many tracks Keith cut at Dynamic Sounds. Top flight ballad that evokes memories of Slim Smith. Classic early Reggae sounds. “Fed Up” (1974) shows a brilliant riddim from Horsemouth/Familyman Barrett/Bobby Kalphat. Powerful song all the way. “There Comes A Time” is one of the few tracks that he has recorded on a digital riddim (1980s). Bottom line is that he can ride any riddim to perfection. Released for the first time here. “Labrish” is a Channel One nugget from the ’80s with great contribution from the late, great Winston Wright. Keith’s versatility has endured from decade to decade; this musical statement has a Peter Tosh caliber to it. Tuff anthem that demands repeated listening. “Kick The Bucket” is an early period classic; his delivery is so heartfelt and the soulful vibrations are undeniable. The magic continues with “Man Of My Word”. Another Channel One masterpiece that is pure flow of lyrics to riddim. “Weeping And Moaning” is anthemwise with a granite top riddim. Real Authentic Sounds! “I’m Gonna Make It” is a skanking delight delivered with an amazing amount of soul; the kind of soul that Toots Hibbert is capable of. Manners and Respect. “City Life” is a later period classic that shows Keith’s amazing vocal range to the maximum. This set closes with a hidden bonus track. “Feel Like Dancing” shows up for the first time. Recorded at Jimmy Cliff’s studio, it features The Tamlins, Harold Butler and Ranchie. This is an R’n’B tinged gem that Keith pulls off in fine style.

“Vintage Keith Poppin – The Good Old Days” excites from start to finish. A body of work that takes the listener back to simpler times. Keith is recognized internationally and this collection furthers his massive contribution to the integrity of Jamaican music. This is a massive collection that will further the massive’s love of his music and will capture the attention of music lovers not familiar with his music. This is a man whose musical vision is of the caliber of Slim Smith, Delroy Wilson, Ken Boothe, Cornell Campbell; you know the GREAT FOUNDATION singers. Highest recommendation. GO DEH!!

Conclusion This is a massive collection that will further the massive's love of his music and will capture the attention of music lovers not familiar with his music.