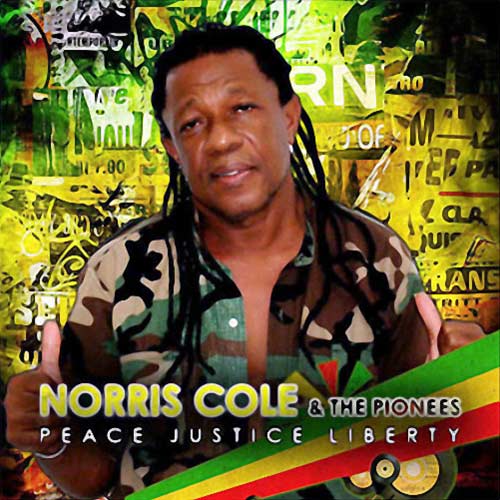 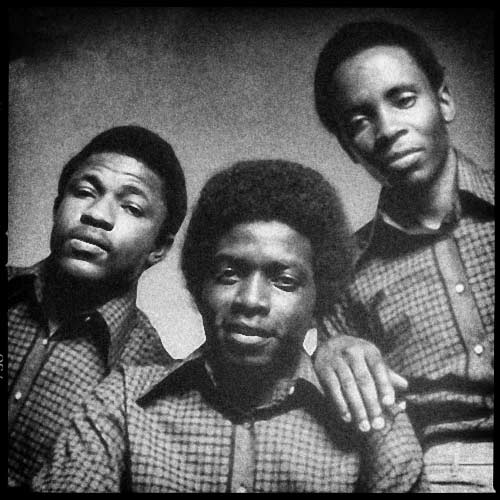 Sydney Crooks, Luddy Pioneers, Norris Cole. Different artists? Not a chance. The same man whose influence as artist, producer, engineer and ambassador has left a Lion imprint in Jamaican music history since 1962. This humble ambassador continues to strive forward with the release of his latest album as Norris Cole. “PEACE JUSTICE LIBERTY” is a true and undiluted reflection of his decades of experience and unwavering endurance.

Norris Cole’s history is vast and so important. Experiences better discussed in a book. It’s essential to lay out a brief overview here. Sydney Roy Crooks (originally from Westmoreland) founded The Pioneers in 1962. Earliest lineups are Sydney and Derrick Crooks. The iconic hit making group has seen numerous lineup changes; Sydney standing firm. Earliest tracks include “Good Nanny” and “I’ll Never Come Running Back To You”. Their classic “Catch The Jackpot” (Amalgamated Records) is THE transition from Rocksteady to Reggae. Longtime member Jackie Robinson came on board with Mr.Crooks initial connection with the great Joe Gibbs for “Gimme Little Loving” (1967). The rest is history. “Longshot Kick The Bucket” propelled the group into the international arena and history books at the end of the ’60s. The hits continued with “Let Your Yeah Be Yeah” (1971). The Pioneers released a slew of classic albums throughout the years. The Pioneers continue forward..

Norris’ own journey is paramount. In the mid ’70s, Joe Gibbs requested his presence back in Kingston (residing in London at the time). From 1976-2002, Norris (artist name change occurred in late ’90s) was the journeyman at Joe Gibbs Studio. He’s credited with producing at least 55 classic albums. Talking about Gregory Isaacs-“All I Have Is Love”, Dennis Brown-“Spellbound”… countless gems. The artists that he produced is staggering-Alton Ellis, Brent Dowe, Delroy Wilson, Marcia Griffiths, Dennis Walks and so many more. There’s a vault of unreleased material that will see the light of day. His other achievements are monumental. The first to record The Heptones-“Gunman Coming To Town” (’63/’64). First producer to produce Reggae in Japan (’75/’76). He’s responsible for Toronto becoming a Reggae outpost. During his tenure at Joe Gibbs, his supervision was embraced by veteran engineers Rohan Richards, Carl Toppin and Carlos Gray. Around 2000, Brazil was calling for Norris Cole. Alongside Joe Gibbs, the veteran was greeted by a massive thousands strong. Norris has been living there ever since, making a solid impact. He operates his own studio to this day and his son, Junior Cole, is an accomplished keyboardist and singer. The great Obeah Denton has taught him bubbling wise. Look for many great projects in the near future from this Foundation statesman.

Upstanding all the way

The set opens with the title track. Norris’ deep and Heartical delivery chants down Babylon triumphantly. Riddim tight with Obeah’s bubbling and Wayne’s licks slicing just nice. These musicians are flawless! “Man Na Man” is an urgent Reality check with lyrics to riddim unity. Boom! “Bonita” is an instant rewinda. Norris delivers a Love ode on par with Dennis Emmanuel Brown’s “Inseparable”. Delivered with Heart and Soul, upstanding all the way. “Ease The Shackles From My Brothers” is a Dread affair that showcases Norris’ pure alignment with King’s Music. Urgent message music fueled by Dean Fraser and Lloyd’s lilting bass. Standout selection! Roots controller on “Blood It A Go Run”. Top ranking lyrical splendor with undiluted truth. Dean and Wayne raising riddimatic levels. The Zion flow continues with “Life Of A Rasta”. Seasoned delivery in unity with veteran drum and bass alongside the ethereal harmonies. “What A Feeling Coming Through” is Love light in JAH sight. Such a smooth delivery that’s livened up with the synchronicity of the veteran musicians. Lover’s galore by the score.

“Two Face Rat” recalls golden Pioneers sound all the way. Norris exudes full Heart in his vocalisms everytime. Obeah Denton’s forward bubbling is superb. “Let’s Rock Let’s Rock” is refreshing party time levels. A broad atmosphere that fits nicely. “It Serious Man” is serious message music. Norris exudes vibes possibly on a personal level; he grew up with amid struggles that only the wise could survive. A poignant truth propelled with Dean’s versatility and C-Sharp’s taut drums. “It’s Gonna Be A Woy E Woy” brims with Soul power. Reminiscent of early Pioneers sounds, it holds a JA country feel. Triumphant calling to stand firm. “Mr. Talketive” is an instant classic! Norris’ songwriting and singing ability in full strength with Fyah from this powerhouse riddim section. “The Struggle” is ZION high with the sign of the Lion ‘pon it. Spot on from start to finish. The album closes nicely with “Pretty Looks, Pretty Looks”. All around fulljoyment with crisp production and Royal sense of purpose.

Conclusion "PEACE JUSTICE LIBERTY" is a musical chariot that wins on all levels. Not one track "kicks the bucket". Norris Cole delivers King's Music in masterclass style with levels that are universally appealing. Don't hesitate on this gem.