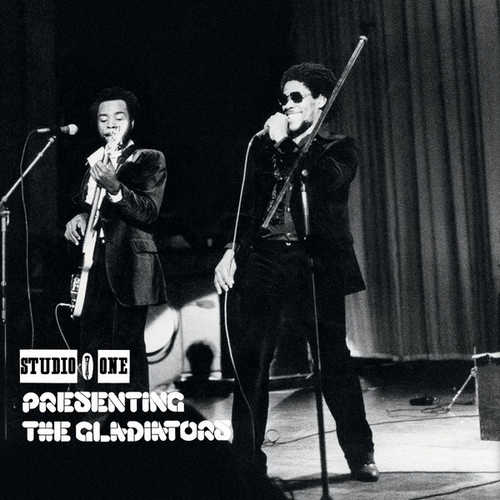 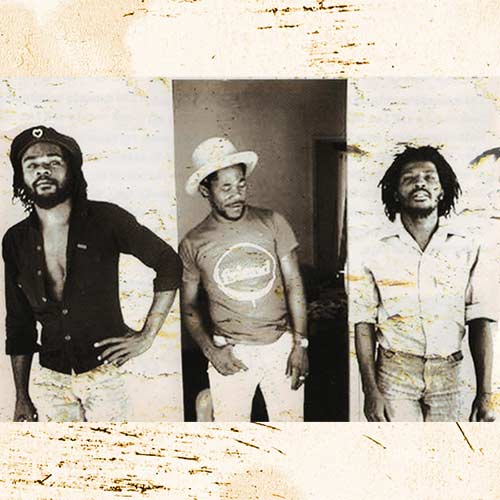 Founder of The Gladiators, singer and guitar player Albert Griffiths, had some local success with a song called “You Are The Girl” (a B-side to The Ethiopians hit record “Train To Skaville” and credited to Al & The Ethiopians), before he formed the original Gladiators with childhood friends David Webber and Errol Grandison in 1966. The first single they recorded for Studio One was “Hello Carol” (with lead vocal by Nicky Thomas), which topped the Jamaican chart in late 1968. In the late 1960s/early 1970s Webber (signs of serious mental illness) and Grandison (family commitments) were replaced by Clinton Fearon and Gallimore Sutherland, and it’s this line-up of The Gladiators that created some of Reggae’s most enduring songs. Albert Griffiths’ sensibilities as a songwriter and singer, complemented perfectly by the sweetness of Clinton Fearon’s voice and Gallimore Sutherland’s harmony, made for one of the genre’s greatest vocal trios. Despite their later success, it was their output for Studio One that formed the group’s sound and molded their success.

Across the first half of the 1970s, it was Studio One that released the bulk of the trio’s recordings. Classic followed classic, as the trio unleashed a stream of roots masterpieces. “Roots Natty,” “Bongo Red,” “Jah Jah Go Before Us,” and “Mr. Baldwin” were all huge hits in Jamaica, as well as storming across the British reggae underground. Like the original Wailers, the Gladiators vocal abilities are matched by their musical talent, making them one of the rare Jamaican groups that actually are a band in the true sense of the word. Thus, while every vocal group has its own unique sound, the Gladiators created a distinct style, one that shone forth regardless of producer.

In 1976, The Gladiators inked a deal with Virgin Records and began to work on their breakthrough debut album with producer Prince Tony Robinson. The end result was the glorious “Trenchtown Mix Up”, a set stuffed with hits, phenomenal revisions of earlier Studio One numbers including “Mix Up,” a re-cut of “Bongo Red”, and “Dreadlocks The Time Is Now”, a re-cut of “Roots Natty”. Coxsone being Coxsone gathered previously released singles for a Gladiators LP entitled “Presenting The Gladiators” in order to cash in on the group’s international success with the “Trenchtown Mix Up” album. This seemingly was a rush job as there was no catalogue number for the original LP, the titles on the sleeve were incorrect, there were no sleeve notes and the album was housed in a rather rudimentary monochrome sleeve.

Originally released in 1977, the classic Studio One set from the Gladiators (with Albert Griffiths on most of the lead vocals and Clinton Fearon and Gallimore Sutherland taking the lead on certain tracks) has finally been reissued in a truly worthwhile way. First of all this remastered Deluxe Edition includes all the songs found on the original album and its subsequent re-issues, while restoring its original track listing for the first time in forty years. And to top it off this release also includes various dubs, extended mixes (many of which are previously unreleased), and “Serious Thing”, which is taken from the master tapes. But, although this Deluxe Edition features 18 tracks it still tells only half the story of their career with Studio One.

Things get started with their great reggae hit “Hello Carol” and a very nicely done version of Brook Benton’s “Rainy Night In Georgia”, before the listener is treated to quality Brentford Road roots all the way. And although every track has its own merit, it are in particular tunes such as “Easy Squeeze”, the marvelous “Jah Jah Go Before Us”, the crucial “Peace Truce aka Peace” (later recorded as “Stop This Fussing” with a different mix), the huge “Roots Natty”, “Jah Almighty”, the sublime “On The Other Side” and the fantastic “Downtown Rebel” (the latter three penned by Clinton Fearon) – all coming from the original album and its subsequent re-issues – that are pretty much essential. And as if that weren’t enough gems for the listener to fulljoy, the album’s niceness continues with truly great bonus tracks of which especially “Serious Thing”, the dub version of “Roots Natty” called “Culture”, and the three discomixes – with “Re-Arrange” coming across the same riddim as The Cables’ “Baby Why” and Sound Dimension’s “Jah Berry” fully deserve an honourable mention.

Conclusion A very welcome reissue, which hopefully will be followed by another Gladiators album with Studio One gems. Essential stuff!!