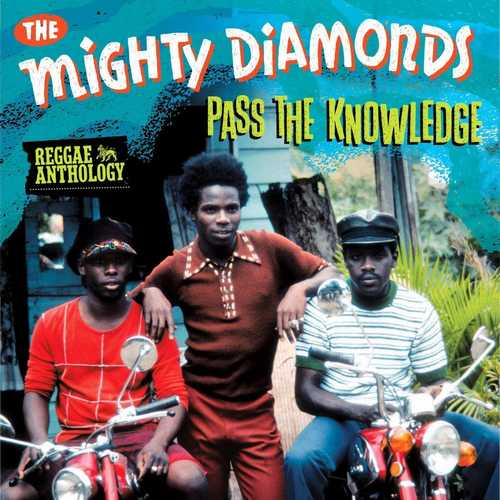 At this moment The Mighty Diamonds, true reggae legends, are touring Europe & the UK and in October 2018 they will return for more shows. Time to look back at their 2013 released Anthology Set!

Over the years VP Records has become the major player in reggae music, and boasts what is reputedly reggae’s largest back catalogue. In recent times the company has issued several interesting releases from that huge catalogue. One of their most interesting releases is “The Mighty Diamonds: Reggae Anthology ~ Pass The Knowledge”, a long overdue collection of tracks from the great longest living Jamaican harmony trio; Judge, Tabby and Bunny better known as The Mighty Diamonds.

Formed in 1969 in the Trenchtown area of Kingston, the group comprises lead vocalist Donald “Tabby” Shaw, and harmony vocalists Fitzroy “Bunny” Simpson and Lloyd “Judge” Ferguson. They had become friends at school in the mid-1960s, and were originally called The Limelight, adopting ‘The Mighty Diamonds’ after Shaw’s mother started referring to them as “the diamonds”. Their smooth harmonies and choreographed stage show were inspired by Motown vocal groups of the 1960s, with Shaw listing The Temptations, The Stylistics, The Impressions, and The Delfonics as influences as well as Jamaican rocksteady artists such as John Holt and Ken Boothe.

Their early recordings were produced by several producers. For Stranger Cole they did “Oh No Baby” and “Girl You Are Too Young” in 1971, Derrick Harriott released “Mash Up”, Bunny Lee produced “Jah Jah Bless the Dreadlocks”, “Just Can’t Figure Out” and “Carefree Girl” and Lee “Scratch” Perry was responsible for “Talk About It”. It was in 1973 that they had their first hit single with the Roy Francis-produced “Shame and Pride, recorded at the Dynamic Sounds studio. It was their mid-1970s work with producer Joseph Hoo Kim that gave them their real breakthrough. The Stylistics covers “Country Living”, “Stoned Out Of My Mind and “Hey Girl”, were recorded and released by the Channel One label. The original tune “Right Time” followed, on Hoo Kim’s Well Charge label, and cemented their status as one of the top Jamaican groups of the time.

Out of Channel One came their debut set “Right Time”, released on the Well Charge label. Virgin Records signed them and released the album in the UK and promoted it heavily. The album became an international success and for the follow-up, Virgin sent them to work with Allen Toussaint in New Orleans, with local musicians providing the backing. The resulting “Ice On Fire” album sold poorly, because the production didn’t appeal to reggae fans, and the album was later described as “an attempt by New Orleans soul musicians to play reggae”. Back in Jamaica, they continued to record for Channel One, with the excellent “Stand Up To Your Judgment” album released in 1978, and continued to produce a string of hit singles. They also released records on their own ‘Bad Gong’ label. The next album, “Deeper Roots”, released in 1979, was their next big album success, again released by Virgin, on its Front Line label.

In the early 1980s they recorded with producer ‘Gussie’ Clarke, largely using old Studio One tracks as the basis for their recordings, and dubplates of these sessions became popular on sound systems in Jamaica, New York, and London, particularly “Pass the Kouchie”, recorded across Studio One’s “Full Up” riddim. Their work with Clarke produced the 1981 album “Changes”. The group continued to release albums regularly, adapting successfully to the prevailing digital riddims of the 1980s with recordings for producer ‘Gussie’ Clarke and beyond. With ace producer King Jammy they did the excellent album “Rise Up” in 2002. In 2008 Makasound released the album “Inna De Yard”, a live set of acoustic versions of classic songs performed with nyabinghi drums. Tabby, Bunny and Judge have produced over forty albums in their long career.

This double cd collection gathers their best slices from the 1970s and 1980s, from their hits with Bunny Lee and Joe Gibbs, through the Channel One highlights to their cuts for ‘Gussie Clarke’ and Donovan Germain. No surprises here, but the addition of 5 dubplates makes the set even more interesting. Furthermore some 11 tunes here have never before released on CD before. Being regarded as one of the major cornerstones of the roots reggae movement, it’s obvious that the bulk of the songs here handle conscious themes with an occasional top notch lovers rock song such as “Lovely Lady”. Some of the producers on board are Joseph Hoo Kim from Channel One, Joe Gibbs, at that time one of JoJo’s biggest rivals, Donovan Germain and ‘Gussie’ Clarke. A DVD of The Mighty Diamonds live at Reggae Sunsplash 1992 is also included showcasing that the Diamonds have always been equally at home on stage as they are in the studio. Track list includes “Right Time”, “Have Mercy”, “Natural Natty”, “Pass The Kutchie” and “There Is No Me Without You”.

Mighty Diamonds at Channel One Studio

The Mighty Diamonds - Fight Out There

Conclusion Don't hesitate, try to see them live & get your copy of this set! Historical stuff!