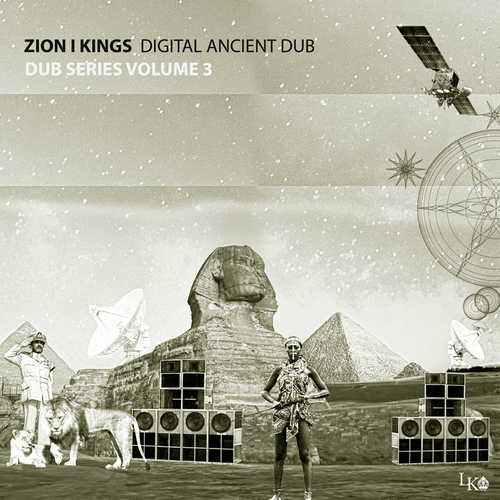 Whether it’s a vocal album or a dub set, a new release from the Zion I Kings – formed by talented multi-instrumentalists and producers Laurent “Tippy I” Alfred of I Grade Records, Andrew “Moon” Bain of Lustre Kings and David “Jah D” Goldfine” of Zion High Productions is a real event for all reggae fans, who have learnt to appreciate some of the finest and most indelible musical offerings coming from this collective in the past twelve years or so.

After the release of the 2016 released tribute to the late great drummer Style Scott called “Dub In Style” (Lustre Kings) and last year’s “Dub In Zion” (Zion High Productions), Zion I King’s now comes up with “Digital Ancient Dub” (Lustre Kings), the third installment in their worthwhile Dub Series. While listening to “Digital Ancient Dub”, fans of the classic reggae dub genre will witness Zion I Kings’ unique take on dubbing original tracks without vocal drops as well as some with from artists such as Ziggi Recado, Akae Beka, Pressure Busspipe, Jahdan Blakkamoore and Lutan Fyah.

“Digital Ancient Dub” surely offers real dub heads earcandy as it features heavy weight drum and bass grooves throughout and infuses live horns, melodica, instrumental solos, trippy synths, psychedelic vocal pieces and heavy filtered drum sections. The album gets started with an epic steppers riddim on the instrumental piece “King Step Dub”, which has a strong melodica melody over a driving kick drum and sweeping bass line, and comes to an end with the awesome “The System Dub”. The latter features vocal drops by Akae Beka & Pressure Busspipe along with a wicked African drum solo laced into the groove.

In between there are some real majestic dub pieces such as “Dub It Inna Africa”, which dubs up Lutan Fyah’s “Kick It Inna Africa” from his 2017 album “Music Never Dies”, and “Rootical Dub”, a glorious dub version of the title track of Lloyd Brown’s great 2013 album released by Zion High Productions. These two tracks are followed by the killer “Colonization Dub” feat. Marcus Gad, making it three excellent dub versions in a row. Furthermore truly worth hearing are “I’m Blaak Dub” feat. Ziggi Recado and the mind-blowing “Queen Of Dub Forest” feat. Jahdan Blakkamoore & Illuminati Congo.

Buy @ Amazon Store near you!
TAGS: dub | zion i kings

Conclusion All in all this is a dub album of pure class.