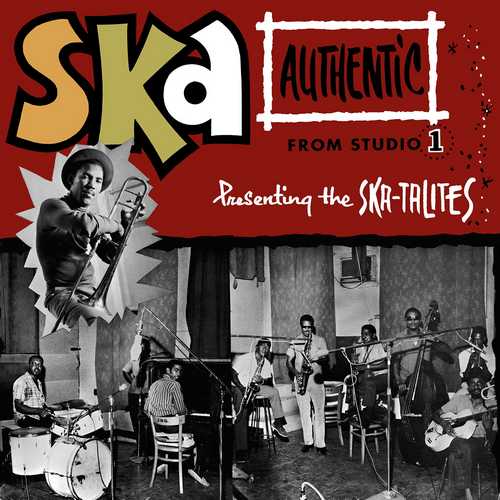 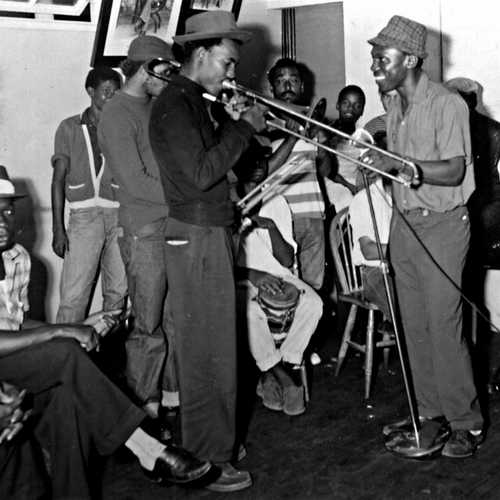 Would Reggae music exist without the Skatalites or Ska-talites as their name was written in the early beginnings? It wasn’t just records they made, it was the multitude of ideas. The ‘Far East’ sound of Don Drummond on trombone, the wild ‘drum on metal’ style of Lloyd Knibbs, on bass Lloyd Brevett who kept everything at walking pace, the guitar play of Ernest Ranglin or Jah Jerry and the piano playing of Jackie Mittoo. The piano can be overlooked in Ska, but that jangly style ‘made’ so many records. And then, of course, there was the mighty horn section which apart from Don Drummond included Tommy McCook, Roland Alphonso, Johnny Moore and Lester Sterling!! They were able to blend rhythm and melody into something the world had never heard before – Ska! A lot of what the Skatalites did, did come out of the ideas that had been first heard in American black music over the previous 20 years or so. Yet it was new. Add a pulsating horn line with a wild drum lick, add some jangly piano – all new!! The original Ska-talites band only stayed together for a couple of years, but they laid a mighty foundation.

First released in 1964 on coloured vinyl, the original “Ska Authentic” album (on ND Records, Studio One’s parent label) is one of the rarest albums in the entire Studio One catalog. The LP was followed by “Ska Authentic Volume 2”, a 1965 compilation with similar artwork to the 1964 LP, also released on ND Records. These were followed in 1967 by the The Ska-talites’ “Ska Authentic” on Studio One using the same graphics. All in all a bit confusing as they were all titled “Ska Authentic”, but featured different tracklists. For the first time in 54 years, the original album is now available again on LP – and the first time on CD. So, those who can’t afford to pay three-figure sums for an original Jamaican copy (if one can be found anyway) will probably be delighted to finally lay their hands on this amazing album, which has been remastered and features the original artwork.

Besides the instrumental classics the Skatalites recorded at Dodd’s Brentford Road studio (often credited to the session leader), this compilation also features fine vocal tracks from the likes of The Gaylads, Jackie Opel, Lee Perry, Andy & Joey, The Maytals and child star Delroy Wilson. Whether doing an instrumental or providing the backing for a singer, the standard of the Skatalites recordings was phenomenally high as can be witnessed while listening to this iconic album.

Tommy McCook’s killer Ska instrumental masterpiece “Freedom Sounds” is the glorious opener of this compilation. It’s an outstanding Skatalites piece, one that can be listened to over and over again. The next instrumental is the gorgeous “Full Dread”, in which the listener can enjoy the brilliance of Cuban born Jamaican saxophonist Roland Alphonso, who was the favourite tenor of Don Drummond. With the rough sounding “Bridge View” and the rollicking “Lee Oswald” this set features two other worthwhile Roland Alphonso instrumentals. And last but certainly not least there’s Tommy McCook’s wonderful “Sca-ba” to fulljoy.

First vocal track comes from The Gaylads, a vocal group formed by Harris ‘BB’ Seaton, Delano Stewart and Maurice Robert. In 1964 they recorded some nice songs for Coxsone Dodd including the here featured “Brown Skin Gal”. Then the listener is treated to three vocal cuts in a row. It starts with the Ska staple “You’re Wondering Now” by vocal duo Reuben Anderson and Joanne Dennis, better known as Andy & Joey, which is followed by Jackie Opel’s “Turn Your Lamp Down Low”. Barbados-born Jackie Opel, known as the ‘Jackie Wilson of Jamaica’, was a popular but somewhat underrated singer who possessed a rich, powerful voice with a high octave range as can be heard on his entertaining track. And then there’s the mega rare top Ska tune “Mother In Law” by Lee Perry, a song with lyrics some of the male listeners surely can relate to. Another tune by The Gaylads featured here is the Gospel-fueled “Rolling Down” (aka “River Jordan”), a truly great offering to listen to. A similar kind of song is The Maytals’ “Heaven Declare the glory of God The firmament showeth his handy work. Day after day, uttereth speach. Night after night, showeth knowledge.” Last vocal track comes from Delroy Wilson, who was still a teenager when he recorded “Sammy Dead”, a song originally done by Eric ‘Monty’ Morris.