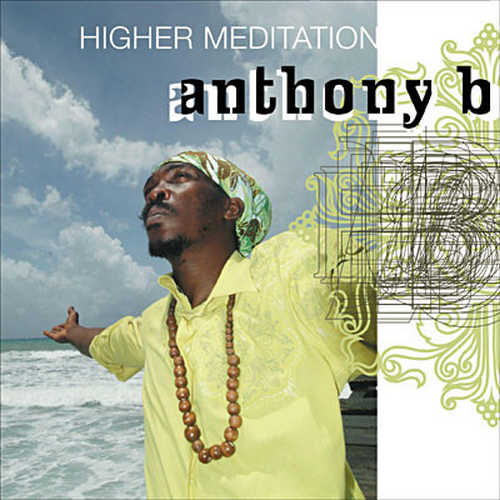 “Higher Meditation” is the title of Anthony B’s brand new album – his third for both producer Frenchie and Greensleeves Records. It’s the label that kickstarted the rasta-singjay’s music career with the 1996 released masterpiece “Real Revolutionary”. Since then Anthony B has taken his place in the forefront of reggae music and has released a notable amount of 7″ singles and over dozen studio albums.

Just like his two previous albums for Frenchie – “Powers Of Creation” and the highly acclaimed “Black Star” – this new set shows that Anthony B reaches top form when working with the highly rated Frenchman. It’s reminiscent of his days with Richard Bell of Star Trail fame. Frenchie’s quality production is based on his ability to get the best out of an artist and top musicians.  Think of his work with Firehouse Crew, Dalton Browne, Christopher Birch, Richard ‘Shams’ Browne, and Dean Fraser. He has regularly proven to be a top producer since he established his own ‘Maximum Sounds’ label in 1993. Check Mykal Rose’s “Selassie I Showcase” and Lukie D’s “Deliver Me”!

With this set Anthony B shows that he can handle all kinds of riddims with ease. On the other hand it also endorses the fact the he’s at his very best when he delivers his uncompromising lyrics, righteous singing and chanting over ‘one drop’ roots riddims. Fortunately most of the riddims featured here are in the ‘one drop’ style and it’s obvious that they do suit Anthony B best, just like they did back in the days.

Thus tunes such as the combination with Natty King, “Honour To Marcus”, “Nah Run From People”, “One Chalice”, “Just Can’t Live That Way”, a current hit on the “Jah Powers” riddim, belong to the highlights of this set. Also worth of hearing is the Nyabinghi-tinged “Your Time Has Come” and the lovers oriented “Tired Of Waiting In Vain”. The latter is performed across a fine re-lick of Bob Marley’s “Waiting In Vain”. Apart from that “Higher Meditation” includes three dancehall flavoured tunes. First there’s “Ease Off”, then “No Passa Passa” and “Real Warriors”, the latter featuring Turbulence.

Conclusion Anthony B flourishes under the guidance of Frenchie, which makes this album worthwhile checking out!