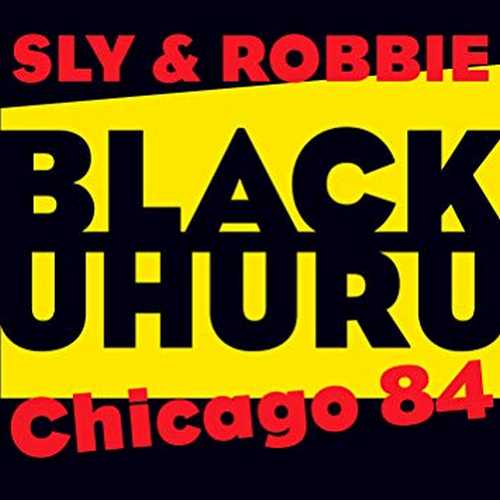 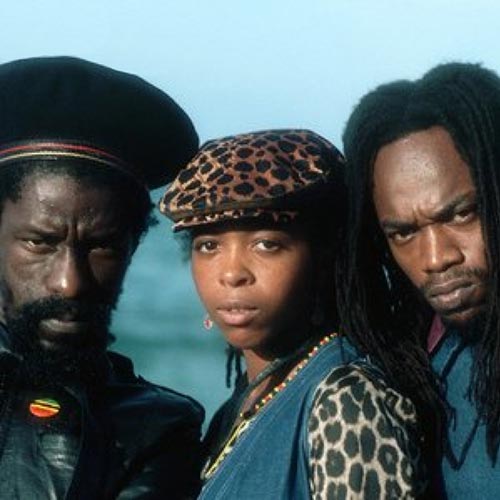 Formed in Jamaica in 1974 by Euvin “Don Carlos” Spencer, Rudolph “Garth” Dennis, and Derrick “Duckie” Simpson, Black Uhuru was the leading second generation reggae vocal groups. The original three founding members grew up in the famed Waterhouse district of Kingston, Jamaica (a hot bed for reggae artists over the years). After a couple of years the group as it was originally known grew apart as Don Carlos went on to a solo career, and Garth Dennis went on to sing with another of the great Waterhouse groups, the Wailing Souls. Duckie Simpson continued to work under the Black Uhuru name (‘Uhuru’ means ‘Freedom’ in the Swahili language of Africa), and he enlisted an up and coming singer, Michael Rose, and Errol Wilson of The Jays to record the “Love Crisis” album with young producer Prince Jammy (then a protege of the famed pioneering reggae producer King Tubby). One of the best known best tracks from this album, “I Love King Selassie” has survived to become a bonafide reggae anthem. The “Black Sounds Of Freedom” album is a remixing of the “Love Crisis” album and was eventually released in the UK in 1980 on the Greensleeves label. In 1979 they released the ‘Showcase” album, produced by the famous riddim twins Robbie Shakespeare & Sly Dunbar. American expatriate, Sandra “Puma” Jones, had joined Michael and Duckie to add haunting high harmonies to the group.

Black Uhuru entered their most commercially successful period. In addition to recording memorable studio albums “Sinsemilla” and “Red”, plus an exciting live album called “Tear It Up”, the group reached its peak with the release of the “Anthem” album in 1983. Remixed and revised for release in the US, the re-done version was re-released in Europe shortly afterwards. Although the album received a Grammy, internal problems caused the band to splinter the following year. Rose was replaced by sound-alike Junior Reid. Jones and Reid remained with the band until 1989. Although Reid left when visa problems prevented him from touring, Jones, who was replaced by Olefunke, was forced to step down after being diagnosed with cancer. She died on January 28, 1990, and was buried in her home state of South Carolina. The original three members Don, Garth, and Duckie joined together once again to record and tour throughout the early and mid-nineties, but it wasn’t a very successful reunion. Neither were later reincarnations of Black Uhuru, the most recent being Michael Rose, Duckie Simpson and Kay Starr (on tour in 2007).

“Live Chicago 84” was recorded during the band’s successful 1984 US Tour. The band was in perfect shape, full of confidence and ready to take over the world. It’s a pure treat to listen to Michael Rose’s vocal delivery, accompanied by reggae’s best backing band ever — bass: Robbie Shakespeare, drums: Sly Dunbar, lead guitar: Darryl Thompson, rhythm guitar: Mikey Mao Chung, keyboards: Franklyn Bubbler Waul, percussion: Christopher Skyjuice Birth — completed by the backing vocals of Ducky and Puma. That same year they performed at Splashin’ The Palace ’84 in Crystal Palace, London UK, and if you’re lucky you might find a copy of a DVD so you can watch the band in full action with the same show. Anyway, Black Uhuru gives the audience 200% pleasure, with classics from the album “Love Crisis”, “Red”, “Anthem”, “Showcase”, “Sinsemilla” and even a track — “Darkness” — from their mediocre album “Chill Out” and the concerts ends with a fabulous (extra long) version of “World Is Africa”, leaving the enthusiastic audience bedazzled and confused.

Conclusion A great album from a great group... wish those times would return once more!