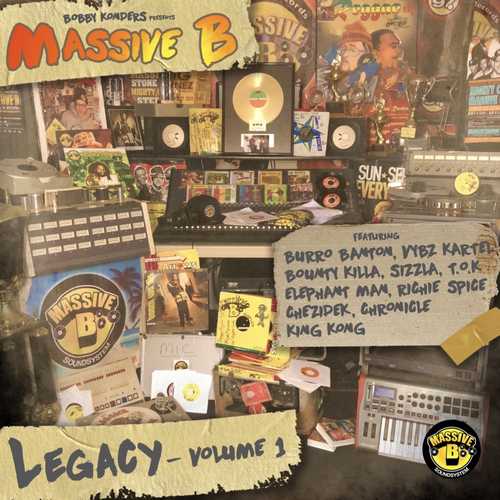 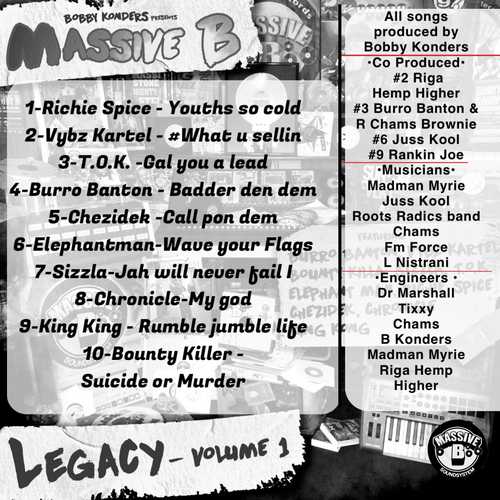 Besides his influential radio show on Hot 97, Bobby Konders outta Brooklyn NY is internationally known for his popular sound system and successful record label and studio. Since he started his Massive B label in 1992 he has worked with many big artists from the reggae & dancehall scene, who voiced new riddims as well as great sounding remakes of classic backdrops. The new compilation “Massive B Legacy Volume 1” marks the beginning of a celebration of Bobby Konders and his record label’s rich musical legacy over the last 25+ years by showcasing some past gems from the Massive B treasure chest. Furthermore included here is “What U Sellin?”, the current smash hit from Dancehall ruler Vybz Kartel, which was produced in collaboration with Riga Hemp Higher.

One of Richie Spice’s most famous songs, “Youths So Cold”, kicks off this collection in truly great style. Underpinned by Madman Myrie’s do-over of Johnny Osbourne’s anthemic “Truth & Rights” riddim the single became an anthem in the streets and a worldwide hit in 2005. Different style, different vibe, but another successful release for Bobby Konders was “Gal You A Lead” by hit making quartet T.O.K., a cut for the “Wanted” riddim. This anthem for the ladies, rocked Dancehall, Hip Hop & Latin clubs around the globe in 2003. The 2007 ruff ‘n’ tuff New York Dancehall hit song “Badder Dan Dem” on the “No Borders” riddim is delivered by Burru Banton, the deejay with the original rock stone voice from Dancehall’s golden era of the ’80s. Chezidek, an incredible writer of uplifting, positive messages, calls out the politicians to help the poor and less fortunate, as well as the legalization of the Herb! Without any doubt the huge “Call Pon Dem” across the “Kingdom” riddim is one of his best singles.

Elephant Man, known as the Energy God, was a major force in the dancehall arena in the first decade of the new millennium. Here he’s present with “Flag Your Waves” on a riddim named “March Out”. That 2006 released single was specifically made for the Massive B truck, to be played when they bounced their way along the West Indian day parade that’s held annually in Brooklyn on Labor Day Weekend. “Wave Your Flags” perfectly harnesses the energy and vibes of the Caribean carnivals, calling everyone to represent their island! Next comes Sizzla’s “Jah Will Never Fail I”. Praising the Most High, his haunting melodies and chants bless the timeless “Heavenless” riddim perfectly.

The last three tracks takes the listener back to the ’90s. From around 1994/94 comes Chronicle’s solid “My God”, which was voiced at Junior Reid’s studio on a version of the classic FM Force’s “Sick” riddim from Brooklyn NY. King Kong’s 1998 single “Rumble Jumble Life” – later title track of the artist’s full length album for Massive B – is a great tune from this unsung dancehall pioneer. And then there’s Bounty Killer – Dancehall’s 5 Star General – who was at the peak of his powers in 1995 when he laced his furious vocal on a hardcore Dancehall beat. When “Suicide Or Murder” was released it was an instant smash!

Conclusion "Massive B Legacy Volume 1" is a solid collection that includes a few killers.