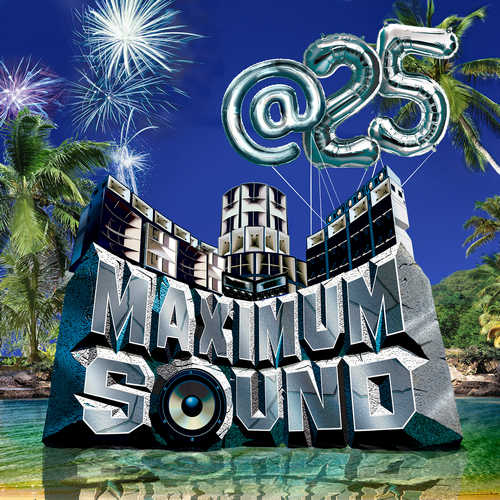 A truly big release (in terms of quality of the music and amount of tracks) comes from out of the UK, courtesy of estemeed veteran producer Frenchie and his record label, the mighty Maximum Sound. Over the years the producer’s label has built a very good reputation when it comes to artist albums, juggling projects and compilations due to its consistent quality. This brand new comp is a catch-up to the great vibes from the label, celebrating 25 years in the business. The selections featured here are hand-picked by Frenchie and belong to the 25! personal favorites of his extensive catalogue.

“Maximum Sound @ 25” is stuffed full of outstanding tunes from some of the biggest and best names in the genre. The list of giant vocal talents featured on this compilation actually reads like a ‘who’s who in modern Reggae & Dancehall’. Besides well-established artists such as Capleton, Mr. Vegas, Beenie Man, Morgan Heritage, Macka B, Luciano, and Bounty Killer, this collection also features the names of hitmakers in the new millennium like Tarrus Riley, Busy Signal, Vybz Kartel, Iba Mahr, Jah Cure, Randy Valentine, and Christopher Martin. A truly impressive roster of artists to say the least!

The opener across Maximum Sound’s latest riddim “State Of Emergency”, “Hold Up Your Arms” by Capleton & Kabaka Pyramid, instantly makes clear that this compilation takes no prisoners. It’s the first Roots killer and there are more to follow. These include Morgan Heritage’s “Conscious Revolution” and “Save My Soul”, which features the golden vocals of Jah Cure, a great offering over the “Jah Blessings” riddim. And then there’s also Luciano’s “By Jah Will” across the powerful “Skateland Killer” riddim, followed by the mad “Uniform Bad Bwoy” from Reggae/Dancehall star Busy Signal, which comes on the gorgeous “Praise Jahovia” riddim. The exceptional “Better Haffi Come” from Anthony B & Chezidek is a very strong sufferer’s anthem type of vibes that comes across the “Matches Lane” riddim. Tarrus Riley sites that “nobody wants to be broke without money” on his typically formidable “Poverty Nuh Inna Fashion”, across an outstanding update of the “Creation Rebel” riddim. An inspired sounding Sizzla delivers the fiery “Africa Prepare” on the “Blackboard” riddim, an updated version of the “Drum Song”.

With tunes Like Mr. Vegas’ “Vibes Maker”, the dancefloor filler “Skank & Rave” by Beenie Man & Voicemail feat. Ding Dong, Vybz Kartel’s “Run Them Down” and Bounty Killer’s “Badman Order” there’s also something to fulljoy for the Dancehall fan, while fans looking for appealing romantic songs are served well with Randy Valentine’s “Hold On”, Christopher Martin’s “Top A Top”, and Richie Stephens’ “Gave Me Your Heart”. And don’t overlook “Warrior Sax” at the end of this collection. It’s a great instrumental version of Aswad’s “Warrior Charge” delivered by legendary Jamaican saxophonist Dean Fraser. The set then comes to an end with a Drum & Bass (Jungle) track, which sees Portugal’s Ricky Tuff ramp up a selection of vocalists including Mr Vegas, Burro Banton, Carl Meeks & Fuzzy Jones on the “Sound Exterminata” riddim – total soundbwoy destruction!

Conclusion Big compilations have been a staple from Maximum Sound for a very long time now, so not really surprising that this set is another one.