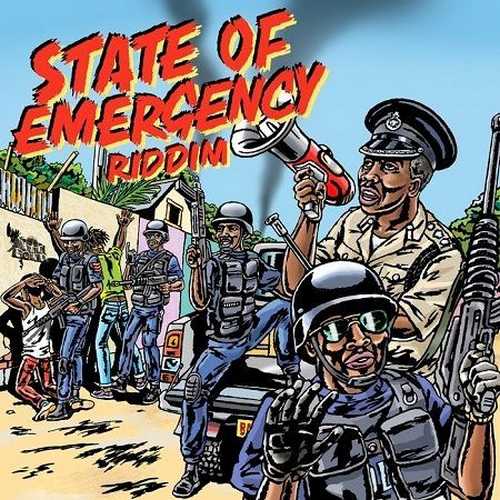 After the this year released juggling projects “Twilight Riddim” and “Vibes Maker Riddim”, producer Frenchie of Maximum Sound rounds off the year 2018 with the release of an energetic modern roots riddim called “State Of Emergency”.

When it comes to riddims, Maximum Sound has definitely done great things in the past 25 years. Many massive riddims have been offered to the label’s long-time fans and reggae/dancehall fans in general. To much to mention here, but those that definitely should be pointed out are the “Jah Powers Riddim”, “Praise Jahoviah Riddim”, “Blackboard Riddim”, “Armour Riddim”, “Royal Step Riddim” and the “Skateland Killer Riddim”. All of these and probably a dozen more from the almost 60 riddims that were released are truly worthwhile checking.

And now there’s the “State Of Emergency Riddim” that can be added to the aforementioned as it sounds fantastic. Taking on the vocal duties is a very fine line-up of young and older artists. Kumar ‘Fyah’ Bent (former lead singer & songwriter of Raging Fyah), promising roots singer Mortimer, Anthony B and the duo Capleton & Kabaka Pyramid turn in stellar efforts with their cuts for the riddim. However, in the end it’s “Hold Up Your Arms”, the collaboration tune by Capleton & Kabaka Pyramid, that appears to lead the way. Although not as strong as the other tracks, Jah Lil’s “Zinc Fence City” and Jah Izrehl’s “Touch Di Road” are decent offerings and shouldn’t be overlooked. The set is rounded off in mind-blowing style with a wicked Dub Mix from the young legend, Gregory Morris.

Conclusion Not picking up the "State Of Emergency Riddim" would be a major mistake!