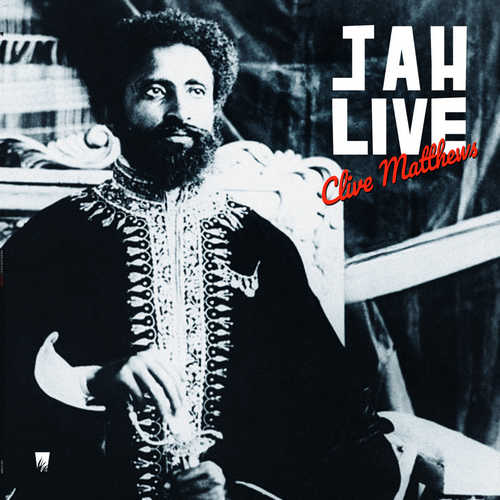 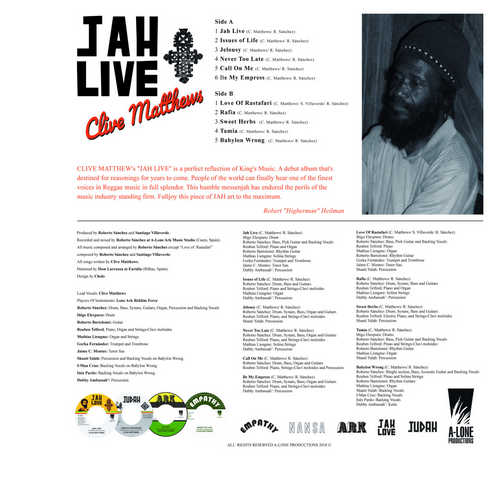 Nothing before it’s Rightful time. JAH works come forth in due season. Stands true for seasoned Roots veteran CLIVE MATTHEWS. With 40 years of endurance in the business, he had a vision the right time would come. The time is now. His debut album, “JAH LIVE”, is an Ites, Gold and Green alignment of his Roots & Love light tones and the Royal touch of complete producer ROBERTO “El Scientist” SÁNCHEZ. Portmore, Jamaica and Cueto, Spain connectivity flows like River Nile – glorious sounds all the while.

In 2017, Roberto Sánchez released the single, “Jah Live”, to international acclaim. Leading to this pivotal moment, Clive’s musical trod was destined for Glory. Growing up in historic Jonestown, the humble Rastaman vibed with greats like The Cables & The Abyssinians. Trodding to Trenchtown, he furthered his inspiration living next door to The Wailers, Delroy Wilson and Wailing Souls. His close friend Errol Dunkley was hugely impactful in forwarding his musical vision. The ’70s were formidable. Clive Matthews’ earliest singles, “My Girl Has Gone”, and “Apology” woke the town. The late, great Jacob Miller brought him to fyah up the mic at Skateland.

Undeterred by lack of promotion, Clive Matthews pushed into ensuing decades like a Lion. Timleless anthems like, “Raggamuffin Style”, and “Change U Constitution” resulted. Clive linked with the great Derrick Barnett and Trevor Roper for “Loverman” and a revisit of Lou Rawls/Gladys Knight’s “Hero”; both hits in Canada. The movements led to touring with Lord Laro. In recent years, sporadic but top ranking singles have surfaced. Clive has never wavered from his focus and determination to spread JAH message. An artist that has the credentials and talent to shine like a blazing Fyah. By the might of The Most High, it’s destiny that one of the most significant producers today would seek out Clive Matthews. From his gates in Portmore, his excited reasoning about this remarkable album – “Blessings from The Almighty… hear a sound and write, lyrics come in my head”. Yes indeed, you’re holding a piece of musical treasure…”

The sounds within bound in Zion tradition. The limitless riddimatic strength of The Lone Ark Riddim Force cradle Clive’s heartical and pertinent delivery with manners and respect. Roberto’s masterful touch has graced countless albums for two decades; his application of creating and producing music the way it should be in on full display once again. Respectful of those who came before him and continually offering fresh nuances.

Real authentic sounds abound within this powerful album. “Jah Live” brims with Clive’s instantly engaging exaltations fueled by the horn driven Rockers riddim. “Issues Of Life” has Zion power. The Rastaman’s original wailing/chanting delivery is on par with singers that paved the way in the latter part of the ’70s. Levels that absolutely will evoke Channel One days. Clive Matthews is seamless of spreading the spectrum of Love. “Jealousy”, “Never Too Late”, “Call On Me” and “Be My Empress” are undiluted masterpieces that heartically express the degrees of Life. There’s wisdom, knowledge and overstanding embedded within these superbly arranged songs. Examples of absolute song writing accentuated with crisp production and riddimatic virtue recalling hot Kingston sessions of decades ago.

Clive Matthews spreads international frequency on the classic, “Love Of Rastafari”, flying cymbals and all. This is an artist who trods as true as he sings. His romantic gestures flow freely on “Rafia” and “Tamia”. Beautiful and emotional tones close to Heart and Soul. Sweet ises permeate on “Sweet Collie Weed”. Ischense galore in the “before, now and after” category. Lyrics to riddim in total accordance. This tour-de-force closes with one of the more resonating anthems in recent times. “Babylon Wrong” has the essence of “Rastaman Chant” and “Rivers Of Babylon”. Committed vocalisms with thunderable Niyabinghi, ethereal organ and earth harmony.

CLIVE MATTHEW’s “JAH LIVE” is a perfect reflection of King’s Music. A debut album that’s destined for reasonings for years to come. People of the world can finally hear one of the finest voices in Reggae music in full splendor. This humble messenjah has endured the perils of the music industry standing firm. Fulljoy this piece of JAH art to the maximum.