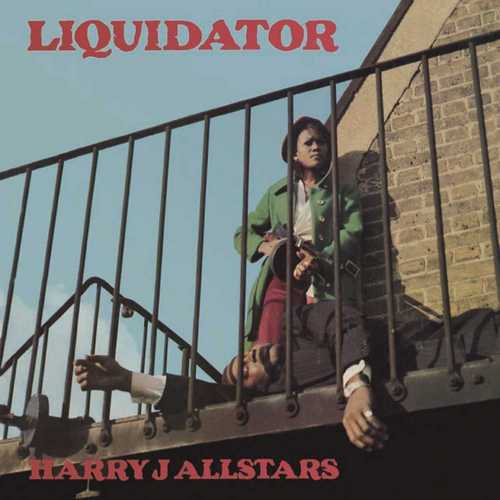 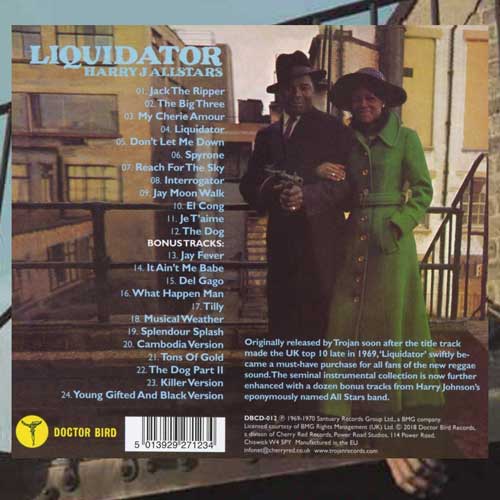 Harry Zephaniah Johnson, better known as Harry J, started to play music with The Virtues as a bass player. Later he became manger of the band. In 1968 he appeared as a record producer, launching his record label, “Harry J”. First tune he released was The Beltones’ local hit “No More Heartaches”, by some regarded as one of the earliest reggae songs to be recorded. In Coxsone Dodd’s Studio One’s facilities he produced the hit “Cuss Cuss” with singer Lloyd Robinson. It became one of the most covered riddims in Jamaica.

In October 1969, he met success in the UK with “The Liquidator” (number 9 in the UK Singles Chart). It was recorded with his session band, The Harry J All Stars. The intro was used by The Staple Singers on “I’ll Take You There”, who had a hit with it in 1972. “Liquidator” became one of the anthems of the emerging skinhead youth subculture. The album with the same name achieved cult status too.

In the beginning of the ’70s he enjoyed another big success with the vocal duo Bob & Marcia. The song “Young, Gifted and Black” hit the charts in the UK. His productions also included Jamaican hits with artists like Marcia Griffiths, Scotty, Trinity and The Jamaicans. The Harry J studio – with Sid Bucknor and later Sylvan Morris as resident recording engineers – became famous as Bob Marley & The Wailers there recorded some of their albums in the ’70s.

The studio was also a ‘must stop’ hangout of many British and other musicians including the Rolling Stones, The Who, and Grace Jones. Johnson’s deal with Island Records led him to record artists such as Burning Spear and The Heptones, Zap Pow, Sheila Hilton, Shaggy, Toots & The Maytals and many more. The studio appeared in the film “Rockers”. Harry J died at age of 68, April 3, 2013 in Savanna-La-Mar, Jamaica.

Doctor Bird, a sub division of Red Cherry Records, has re-released the original “Liquidator” set, However, they doubled the amount of songs: no less than 12 extra tracks are added to the cd. The hit tune is a great instrumental, still used on football grounds, notably Chelsea FC’s Stamford Bridge. A second version of the song is “Tons Of Gold”. Most tunes are carried by distinctive bassworks and an organ that provides catchy melodies. Cover versions galore: Stevie Wonder’s “My Cherie Amour”, The Beatles’ “Don’t let me Down”, also used by Marcia Griffiths for her vocal version. The erotic hit “Je t’aime, Moi Non Plus” by French duo Serge Gainsbourg and Jane Birkin was given the Harry J treatment as well. “The Big Three” uses Jackie DeShannon’s “Put A Little Love In Your Heart”, also covered by Marcia Griffiths. “El Cong” was the backdrop for Bob Andy’s “Weep”, and “Reach For The Sky” was used on Bob Andy’s majestic tune “Peace Of Mind”.

All bonus tracks are in the same vein, a mixture of covers and original tracks. Again a Bob Andy tune pops up. “You Don’t Know” was one of his many hits, here’s the instrumental version called “Tilly”. Then there’s a do-over of Bob Dylan’s “It Ain’t Me Babe”, followed by the Western movie inspired “Del Gago”, complete with a spoken intro. “Musical Weather” is the non-vocal version of “No More Heartaches” by The Beltones. The Blake Boy (Winston ‘Merritone’ Blake?) recorded “Cambodia” for Harry J, the version is on this set too. An instrumental take of Bob and Marcia’s international hit “Young Gifted And Black” closes the album.