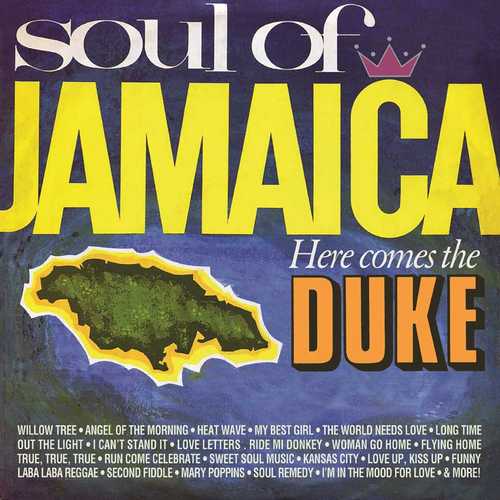 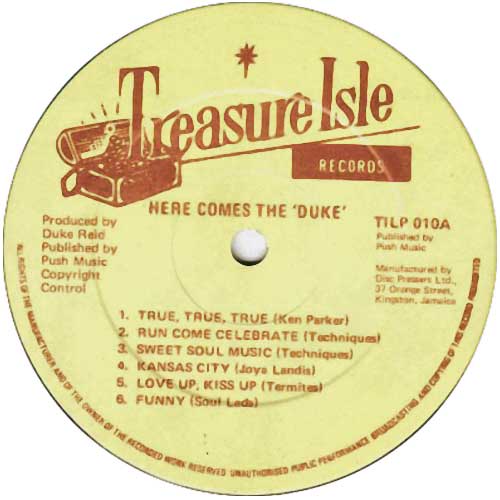 This double cd album features the works of the great Duke Reid, whose outlet was, at their best, reggae at its absolute peak. The set adds nuff nuff bonus tracks, making it one of the best Treasure Isle overviews available, but it would have been the ultimate Treasure Isle collection with some tunes from U-Roy, The Melodians and Dennis Alcapone.

With production values on a par with those at Motown, Treasure Isle created many of Jamaica’s classic hits. The energetic, uptempo ska music dominated the island’s music scene untill the summer of 1966, when the slogan “If you’re ready, come do rocksteady” became the slogan of the years 1966-68. Rude boys with golden voices – inspired by American soulbrothers like The Impressions, The Drifters, The Platters and the Moonglows and sophisticated like Sam Cooke, Otis Redding and Solomon Burke – sung their tunes like heavenly angels. Their silky, passionate and languishing voices were often backed by the swinging riddims of the superb Tommy McCook & The Supersonics, who were the house band at Treasure Isle. Duke Reid’s Treasure Isle ruled the Jamaican airwaves during that period when many rocksteady songs were recorded and the competition with Jamaica’s other top label Studio One made the music scene extremely exciting. Rocksteady lasted only for a short period and was replaced by ‘reggay’ or ‘reggae’. The rest is history….

Soul Of Jamaica and Here Comes The Duke

Towards the end of 1968 Trojan -who had the exclusive UK rights- issued two compilation albums, which over the years that followed have become among the most sought-after in the business. Highlighting some of the best of his productions both “Soul Of Jamaica” (aka “Come Rock With Me In Jamaica”) and “Here Comes The Duke” featured an array of talent only his aforementioned rival at that time, Coxsone Dodd, could hope to match. A third Treasure Isle LP is featured here is well, the album “Soul For Sale”. All tracks from this package are tasteful, irresistibly danceable, soul-soaked classics. Everything you expect from a good Treasure Isle compilation album is here: from the Tommy McCook instrumentals to the hits of Alton Ellis, and in between gems from The Techniques, Phyllis Dillon and Ken Parker.

The most tunes offered here are well known classics. Plenty highlights and every fan has his/her own favorites. Check The Techniques. With their heavenly harmonies they are recognized as one of the immortal groups in the history of reggae music. Beginning with scintillating ska shakers they absolutely dominated the rocksteady period with hit after hit. Here included are “Travelling Man”, “Run Come Celebrate”, “I’m In The Mood For Love”, “There Comes A Time” and more top tunes.

Check The Jamaicans. The vocal trio, consisting of Tommy Cowan, Norris Weir and Martin Williams, did their first recordings in the second half of the sixties and racked up hit after hit (including two festival winners in a row). Two lesser known gems are included here: “Peace And Love” and “Woman Go Home”. Ken Parker (founder of The Blues Blenders) shows off his falsetto mastery with his hit tune “True True True”. The greatness of The Sensations shines on tracks like “Those Guys” and “I’ll Never Fall In Love”. Phyllis Dillon was the big female voice at Treasure Isle. From 1966 to 1972 she cut a large amount of singles for Treasure Isle. Amongst her finest outings were the self-penned “Love Was All I Had” and her duet with Hopeton Lewis “Boys And Girls Reggae”.

In the mid sixties Joya Landis (born Wanda Jeanne Vann) was asked to go to Jamaica, where she recorded several songs for producer Duke Reid. This collection offers here best efforts: “Angel Of The Morning”, “Kansas City” and “Moonlight Lover’. Alton Ellis, known widely as the ‘Godfather of Rocksteady’, blessed with a distinctive tenor recorded several hits for Duke Reid. Here you’ll find gems like “My Willow Tree”, “I Can’t Stand It” and “Breaking Up”. Two tunes – “Funny” and “I’m Yours Forever” – from the mysterious Soul Lads, who in fact were Ernest Wilson, Peter Austin and Freddie McGregor!

Many tunes from the superb Tommy McCook & The Supersonics, who were the house band at Treasure Isle, are included here. An hilarious tune called “Second Fiddle” is a rocksteady version of ‘Popeye the Sailorman’! “Regay” is a version of “The Old Goatherd” from the movie “The Sound Of Music”. Then there’s the calypso influenced cover version of “Get Me To The Church On Time”, and “Soul For Sale” that covers “Sammy Dead” by Eric ‘Monty’ Morris. The vocal tune by The Tennors “Ride My Donkey” is redone here with the help of some unknown singers.

Conclusion One of the best Treasure Isle collections.