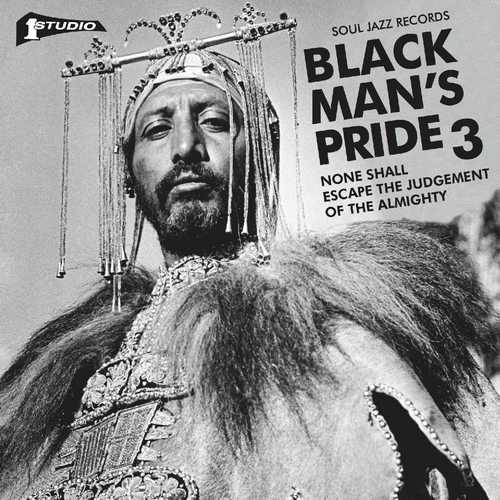 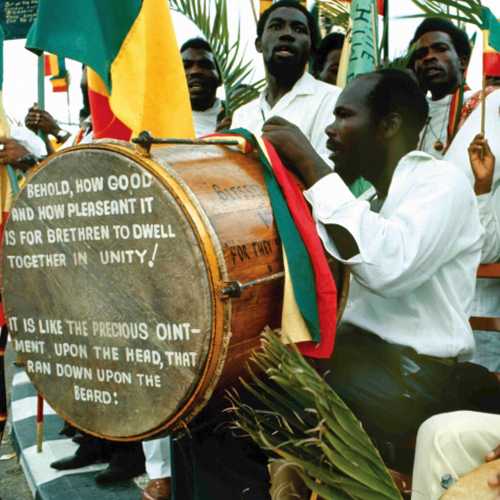 Soul Jazz Records is a record company and a shop based in the heart of London, making, releasing and selling music, old and new for many years. They specialize in Dance music including Jazz, Soul, Funk, Reggae, Latin, Disco and Hip Hop plus a wide range of contemporary music from around the world. Their shop, located in London’s Soho, is called Sounds of the Universe. This current release is the latest installment of Soul Jazz Records’ on-going collection of Rastafarian music at Studio One, featuring classic material from well know and obscure roots and culture artists.

The term ‘Roots Music’ or just ‘Roots’ was used to label the records released by the likes of Burning Spear, The Abyssinians, Wailing Souls, Culture, Junior Byles, The Royals, Big Youth, Bob Marley & The Wailers. The themes concentrated on the teachings of Rastafari, black awareness and black pride. In the 1970s roots was the most important ‘style’ in reggae music. Coxsone Dodd never actually committed to Rasta, but as a good businessman he saw the potential in a very early stage. In the early 1960s he connected to Count Ossie’s Wareika Hills Rastafarian compound in the hills as his Skatalites would jam with the Rastafarian drummers. On the other hand Count Ossie performed during Sir Coxsone’s dancehall sessions. In 1969 he signed a young Burning Spear after an audition featuring a deeply spiritual, chant like reading of “Door Peeper”.

Soul Jazz Records released the first volume, “Black Man’s Pride 1” at the end of 2017. Volume 2, subtitled “Righteous Are The Sons and Daughters Of Jah” hit the streets in the summer of 2018. The third installment in the series of Rastafarian inspired music from Studio One was recently released. It features some well known artists as well as obscure groups.

Sleepy, aka Horace Hinds, was renamed Horace Andy by Coxsone Dodd, the producer with whom he would cut some of his most remarkable tunes. He is featured twice here. “Conscious Dread Locks” was released when he was at the beginning of his career at Studio One and is a worthy kick off of what happens to be an enjoyable roots set. His second tune is a moving cover of Phil Trim’s gospel tune “Oh Lord Why Lord”. A young Freddie McGregor covers Junior Byles’ illustrious roots reggae anthem “Beat Down Babylon”. The Wailing Souls cut many strong tunes at Brentford Road, collected on their 1975 album “Wailing Souls”. From that album comes the tune “Can’t Catch Me”. Then there’s Erroll Dunkley compelling song “Satisfaction”, a gem that needs instant rewind.

We’re glad they included Sugar’s debut song for Studio One, his take on the Heptones “Love Me Girl”, the roots anthem “Wrong Doers”. Sugar Minott return with his friends Tony Tuff and Derrick Howard, aka Eric Bubbles as the African Brothers. “No Cup No Brock” was the only single they recorded for Coxsone Dodd, singing wisdoms like “no milk, no spill” and “no love, no lies”. Zoot Simms was a pseudonym used by Noel “Scully” Simms, foundation singer and multi-instrumentalist. He is considered as one of Jamaica’s most gifted percussionists and collaborated on numerous recordings. His tune “When The Time Comes” really shines! The Gladiators’ “A Prayer To Thee” is basic and magnificent with its brilliant Clinton Fearon vocal delivery and vocal harmonies.

Big Joe recorded a few tunes for Coxsone including the outstanding roots tune “Jah Jah Help Us”, here his style reminds of Big Youth. Egbert ‘Alphonso’ Stewart formed the Hamlins in the early 1960s with Alton Browne. On this set he delivers a solo cut called “It’s No Secret”. The Manchesters aka Mr. Manchester perform two tunes with meaningful lyrics. First comes the awe-inspiring “Selassie Bandman” followed by “Give Natty Dread The Glory”. The Mellodies’ “Dread Oppression” is a heartfelt plea. Great pleasure listing to is Lloyd Jones & The Super Natural Six with “Get Up And Try”, such a moving tune! Album closer “Whey No Dead”, a top shelf track, sees Glen Miller riding the “Things A Come Up To Bump” from The Bassies.