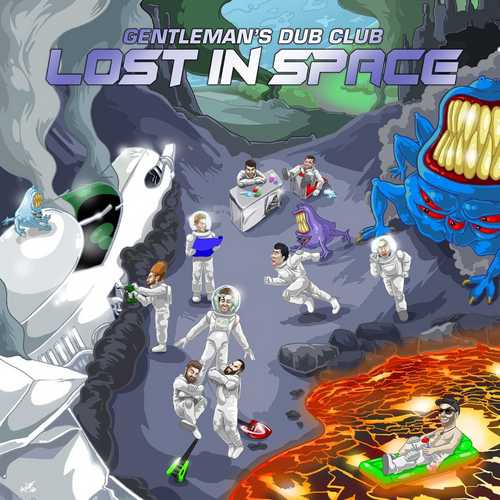 Exploring, enjoying and listening to reggae, dub, rocksteady, ska, UK steppers, hip hop, jazz and many more styles of music they developed a phat packed sound of their own. Known for their hotter than hot explosive jaw-dropping shows, they scored really big last summer with the acclaimed project with The Nextmen.

For this project they teamed up once more with the New York Easy Star Records label. The result is eleven track set, that invites you to join the Gent’s on their musical journey through space. After the intro we have to “Light The Fuse”, a fast paced powerful work that makes us hungry for more. It’s their third single from the album. “Stardust” comes next. The blazing horns and the pounding bass are embedded in a spacy atmosphere. “Groundshakin”, hypnotic in nature, brings a moment of reflection, the tone is mellow and reflective.

The speed goes up with their invitation to get “Out Of This World”, “into the night”. The song is blessed with inventive horn arrangements and even a poignant guitar solo. Let’s take a break with “God Of War”. The instrumental with its compelling horns lines is tingling with jazzy influences. Time for combination style. The second single from the album, “Turning Back”, features vocal powers from Million Stylez. The renown Swedish dancehall artist and the Gent’s fire on all cylinders with this tune!

No need to slow down in “The Eye Of The Storm”, a ska-ish tune that won’t let you down when you’re on the dancefloor! Space and time have no boundaries on “Intergalactic”. The big phat sound is dubbed up as they continue to the next galaxy. “Midnight Healing” is an instantly engaging tune while drummy Tommy Evans’ output is sparkling. The album finishes with the second combination tune. It’s reggae veteran Winston Francis who steps up and gently propels us back to the days when reggae was about sweet harmonies, catchy tunes and smooth singing!

Conclusion Join the Gent's on their musical journey!