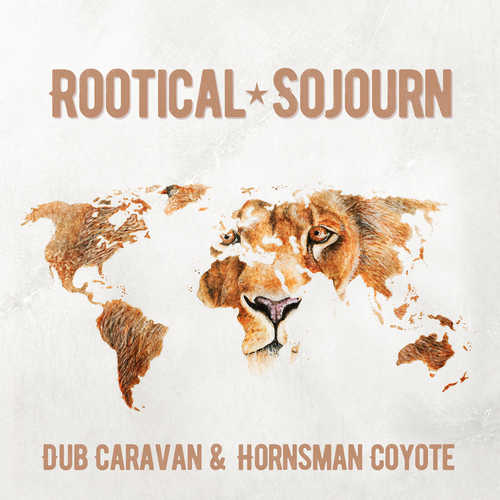 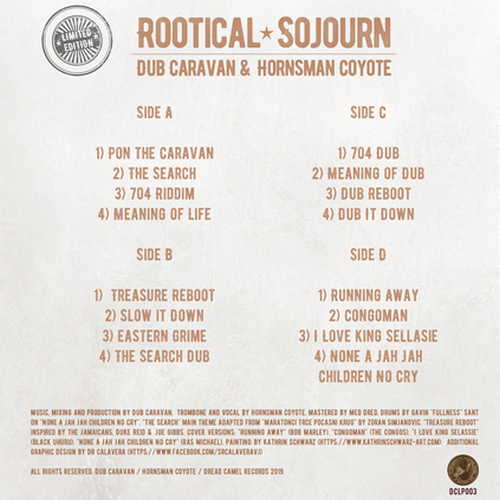 The originator of the Dub Caravan project is Felix Russ Abu, an artist, multi-instrumentalist, producer and composer of Palestinian descent, who strives to create a multi-dimensional musical landscape for listeners who are craving something fresh, original and out of this world. Members/partakers of Felix Russ Abu’s Dub Caravan project jump on and off as they please, but always remain part of the Caravan. Being a member of this project is about belonging to something special without being bound to it. It’s organic, natural and free flowing. In theory, the music of Dub Caravan is not associated with any particular style, but it can’t be denied that it is heavily influenced by the Dub and Reggae music of the 70’s, jazz, punk rock and ethnic music particularly from the Mediterranean, Middle East and Far East.

Son of the famous Serbian artist Borivoje Kojic, Hornsman Coyote, started his works as a dub trombonist in late 1990, by joining the Serbian reggae pioneers Del Arno band. In 1994 he formed one of the most prominent hard core/reggae crossover bands in Balkan called Eyesburn. After Eyesburn took a break from activities in 2005, Coyote went to London and met Jerry Lions of the Twinkle Brothers, who was the first roots reggae producer to work with him on the trombone instrumental songs. Not long after working with Jerry he linked with Jah Works to record his first full lenght instrumental album titled “brass Roots”. That was his gate into the Dub/Reggae international scene of today. From then Coyote started to deliver horns for many UK and European labels and productions. With his instrumental versions he reached a number of almost 40 vinyl releases with various producers and singers. He contributed his skills in playing and making horn arrangements on albums of artists like Lee Scratch Perry, Max Romeo and many more.

Dub Caravan and Hornsman Coyote have collaborated on several releases in the past, most notably on the double LP “Breathe Of Peace”, which was released in 2013. Now they follow up that album with a brand new collaboration project called “Rootical Sojourn”, a 16 track reggae-influenced album packed with horn instrumentals, dub versions and classic reggae covers. All tracks were composed, performed, and mixed by Dub Caravan using a combination of analogue and digital equipment. Once the riddims were recorded, horns, and little bits and pieces of vocals for “Pon The Caravan” were overdubbed by Hornsman Coyote.

Opener “Pon The Caravan” is the only track that features some vocals as it serves as introduction to the album and the lyrics “just step along with Caravan”, are used to gear up the listener for the musical journey that he or she is about to embark on. From there the listener is treated to six horn instrumentals, mostly done in a roots reggae style, five accompanying dub versions which are mixed live and in an analogue fashion, and – as a kind of bonus – four solid takes on classic roots reggae songs. The latter include Bob Marley’s “Running Away”, The Congos’ “Congoman”, Black Uhuru’s “i Love King Selassie” and Ras Michael’s “None A Jah Jah Children No Cry”. Although almost every track is candy to the ears, it are in particular “Pon The Caravan”, “The Search”, “Meaning Of Life”, “Slow It Down” that instantly go on repeat.

Conclusion Definitive musical genius Dub Caravan together with well experienced trombone player Hornsman Coyote have created an album of consistent quality, worth hearing even if you aren't a big fan of instrumentals or a dub head in any way.