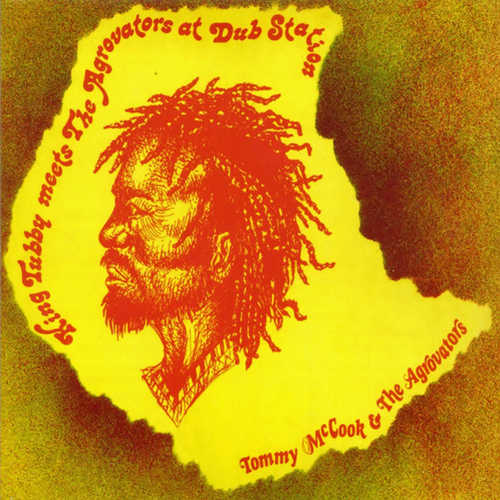 Trojan have come up trumps for May and June 2007 with new Gregory Isaacs and Tubby’s re-issues.

So much incredible, good, bad and bland Tubby’s music has flooded the market over the last ten to fifteen years, that it’s hard to imagine there are many more rarities left — but most of the versions included on this Tubby’s/McCook album haven’t seen wider CD re release until now.

For those of you who love the mid to late ’70s period Tubby’s/Rockers/Bunny Lee, you are in for a real treat here. The first tune “Creator Of Dub” has also seen service on the Tappa Zukie “MPLA” album, and the cut here is explosive : classic Rockers. The next rhythm track is also familiar, being a re cut to the Johnny Cash “Ring of Fire” horns refrain, a melody clearly very popular at the time as Don Drummond’s earlier testament shows.

“Dub Station” is a huge cavernous affair, opening with a majestic horns refrain, before a fast paced snare and flying cymbals parry with jazz style rim shots in a furious dub, Tubby’s turning the DNA of the rhythm inside out with tunnel like dub effects. “King Tubby Dub” has a mid 70’s disco influenced funk intro, before tearing into another tight, tubular Bunny Lee dub, with scouring cymbals. “Caretaker Dub” sounds like your speaker cones are coming unstuck or malfunctioning.

The original album featured 12 tracks — the current Sanctuary re-issue adds another extra 12 thunderous cuts to the original issue, with dubs to Johnny Clarke’s “Move Outta Babylon” (“Moving On”), Upsetter rhythms from “Black Board Jungle” (“Canon”) and countless other tunes you will recognise. So, the serious, committed reggae collector will certainly know most of these rhythms very well, but many of us will not have heard these specific cuts to these drum and bass lines. There is not a single bad tune on the entire record. It’s an indispensable, perfect Tubby’s/Bunny Lee purchase, featuring some of the most inspired cuts you are likely to hear of these very familiar mid to late ’70s tunes.

Conclusion Though there are no "freshly heard" or newly dug up rhythms here, to many of us reggae obsessives, this album may well be amongst the best dub reissues of the past three or four years.