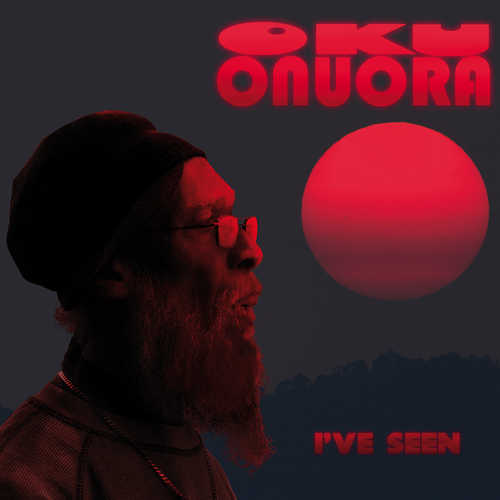 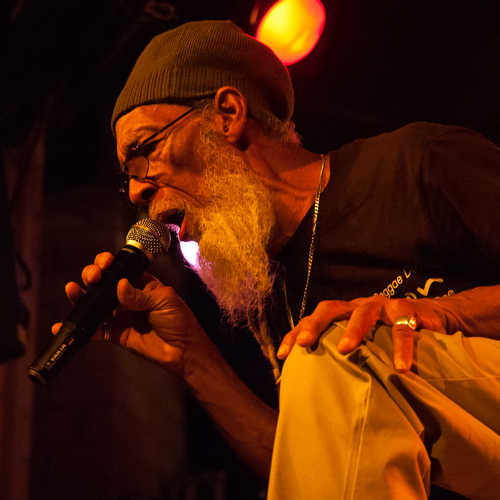 Born in Kingston in 1952, dub poet extraordinaire Oku Onuora (born Orlando Wong) is known for his hard hitting socio-political commentaries fused with potent musical accompaniment. Together with people like Mutabaruka, Yasus Afari, Linton Kwesi Johnson and the late Michael Smith, he belongs to a small group of poets who not only publish their engaged poetry in written form, but also use reggae riddims as a vehicle for their poems. Despite some great and highly acclaimed albums from abovementioned poets, the genre is still bubbling on the deep margins of roots reggae.

Oku Onuora’s rebellious nature and involvement in guerrilla activities based in the hills around Kingston, eventually led to him being sentenced to 15 years imprisonment in 1970. He began writing poetry in 1971, and became the first inmate to be allowed to perform with a reggae band in 1974 when Cedric Brooks’ band The Light of Saba performed in the prison. Two years after his premature release from prison in 1977, he recorded the single “Reflections In Red”, his first musical release and the first Jamaican dub poetry record. The rest is history…

In 2013 after withdrawal for over a decade from the poetry/music scene, Oku Onuora signaled that his re-emergency was in full effect with the release of the “A Movement” album, featuring Monthly Alexander, Sly & Robbie, Audrey Hall, and Jawara. This was followed up by the vinyl single release “Yesterday, Today, Tomorrow” in 2015. Then there was a reissue of the seminal “Reflection In Red” in 2016 and in 2018 came the re-release of the compilation album “I A Tell Dubwize… & Otherwise”. The latter mostly features A and B sides of 7″ singles from the late ’70s that were recorded at the Tuff Gong studios.

And now, the ‘founding father of dub poetry’ returns with a brand new album entitled “I’ve Seen”. Apart from the jazzy remake of Bob Marley’s “Running Away” on the “A Movement” album, Oko Unuora has always worked with strictly original riddims to set his poetry to, and the backdrops used for this album are no exception. Produced by Fruits Records and Thomas ‘Dr. T’ Lautenbacher the album features full sounding powerful riddims, played by the musicians of The 18th Parallel, to which Dr. T has added a modern electronic touch.

The full length tracks on the album are alternated with a cappella poems. Oku Onuora’s indelible poetic style is amply matched with tight sounding, royal riddims. Next to the charismatic dub poet’s passionate declaimations, it’s the sheer level of musicianship that elevates the quality of this album. One of the tracks, “Fuel For Fire”, sounds familiar to the ears as it was released as very limited edition 7″ single in May 2018. Backed by the late great trombone player Rico Rodriguez and The 18th Parallel, the poem was inspired by the verdict of the grand jury in the Michael Brown case and the Garner case. A great track and definitely one of the album’s highlights. Of the remaining 7 full length tracks it are in particular the album opener and title track “I’ve Seen”, “Don’t Like It” and “If Not Now” that stand out. If you listen to this album, one can only conclude that after all those years, Oku Onuora is still capable of delivering an album that is impeccable and timeless.

Conclusion A very accessible and a very good album from the 'founding father of dub poetry'. Highly recomended!!