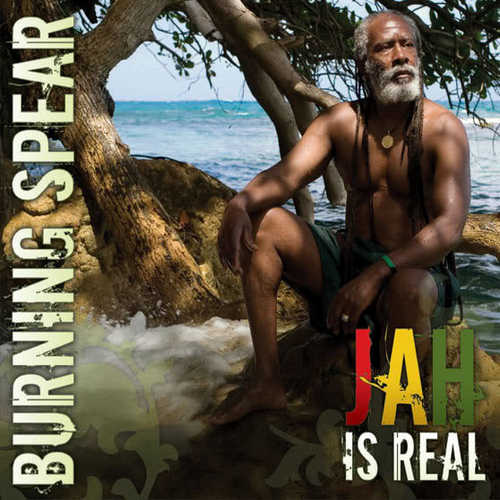 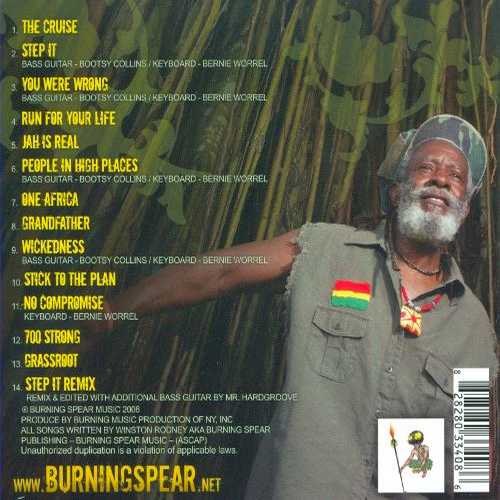 1st March is the earthday of Jamaican roots reggae icon Winston Rodney OD who’s better known by his stage name Burning Spear. To celebrate the artist’s earthday, we here feature a review of one of his many album releases.

Reggae is a music scene with unfortunately relatively many untimely deaths. We therefore should almost be grateful that the Burning Spear, Winston Rodney, is still among us. In the present he seeks to maintain his health and strength also with yoga, besides of course the consistent Rastafari (and musical) inspiration. The Spear’s long music career started in 1969 when he released the already quite “rootical” sounding song “Door Peep” at Studio One. Many albums followed, of course, including organizational and personal changes – though in time with a steady band.

This album, “Jah Is Real”, is a relatively recent one, released in 2008. That is 39 years after his 1969 debut. All the more remarkable that there is still a consistency of style since then, through his classic 1970s albums like “Marcus Garvey” or those of the 1980s and later. It is a style that worked and has gained him many fans worldwide. This 2008 album is also solidly organic, live-band Roots Reggae, although of course with a somewhat more “modern”, “crisper” sound than his albums from earlier decades. Interesting to note how Burning Spear avoids a (too) digital sound, unlike some other roots icons whose later albums sometimes had a more “digital dancehall-like” feel. Neither does the Spear venture into the “do-over” or singing over existing Reggae Riddims, that became more and more common in Jamaican music. On this 2008 album the music/riddims are all “fresh”, i.e. original.

Burning Spear still has his trademark vocal style that is somewhere between singing and a more rhythmic “chanting”. A vocal style in which he varies in most cases just enough to keep it interesting. The risk of a slight repetitiveness or monotony is always there, but is mostly avoided. Besides, the accompanying music is usually strong enough on most Spear songs to make even vocally somewhat less varied songs somehow engaging. Also on this album. One must also consider that the lyrics are likewise important if one wants to understand fully the musical concept Burning Spear wants to get across. In the liner notes, Rodney himself calls it “music that makes sense”. This includes Rastafari-inspired, Garvey-ite and social messages, and on Africa, human relations, and the world situation. A relatively “newer” theme in his lyrics – recurring in lyrics on this album – is on wrongs within the music industry itself, where the exploitation and lack of secured artist rights also affected Rodney himself, and his dissatisfaction with it made him decide at one point to go independent (see above behind ‘Label…’).

The strong, catchy tune “Wickedness” on this album has this last aspect as its theme (with in the lyric: “since 1969 they been holding on to what is mine”). This song, along with “You Were Wrong” and “Stick To the Plan” are among the more immediately catchy and engaging ones on this album. The somewhat simple but effective title track “Jah Is Real” is also good, and the “chanting” “People in High Places” is also strong. “One Africa” meanwhile has interestingly a slight Afrobeat (or: some would say “Calypso-ish”) feel, fitting well the groovy, organic, live-band feel. Most other songs are nice as well, though some (like “Step It”) are a bit repetitive, but the tight, groovy ánd varied music helps to keep you engaged.

Young, relatively unknown musicians play here, who sound adequate. There are the nice background vocals of a female gospel group. Interesting are also the guest musicians on some of the songs: US funk musicians Bootsy Collins on bass and Bernie Worrel on keyboard, both of Parliament/Funkadelic fame. Not that their playing the reggae riddims as, one can say, “outsiders”, makes it sound less reggae, or anything, or gives it a crossover, funk feel. The roots reggae vibe still dominates here. Here and there, however, a slight funk influence can be discerned.

Further, especially the horn section sounds good and varied, but so do other musical additions, adding to a nice, sometimes jazzy – yet groovy – polyrhythmic feel, as heard also on other Burning Spear albums. One critique that can be given, however, is that the music is here and there a bit more empty or “dry” than on other Spear albums, on some songs at least. More percussion – or percussion mixed in louder in the whole – would I think have helped, as also commonly in reggae (and other Burning Spear albums) percussion (conga, binghi drums a.o.) tends to spice up the overall music. This “dryness” is a slight flaw, and does not disturb the overall solid and groovy sound of this 2008 album. This combines with catchy melodies and songs, and the good way Rodney uses his voice.

Most songs are thus, as I already said, nice or good, and some even great (such as “You Were Wrong” and a few others). The only song I personally did not care for so much, which seems even unnecessary, is the Jungle-style remix of “Step It”. This does not add too much, I think, to the reggae version on the same album, while personally I find the Jungle rhythms too fast and “nervous” (and monotonous). For my taste, but I am of course a reggae fan… This album won a 2009 Grammy Award for best reggae album. I think the Grammy Award is too commercial, and mostly not very correct in evaluating reggae music (or Burning Spear’s career, I think… this album is not bad, but he arguably made better ones), …but at least that award got Burning Spear some recognition.