Cocoa Tea – Music Is Our Business 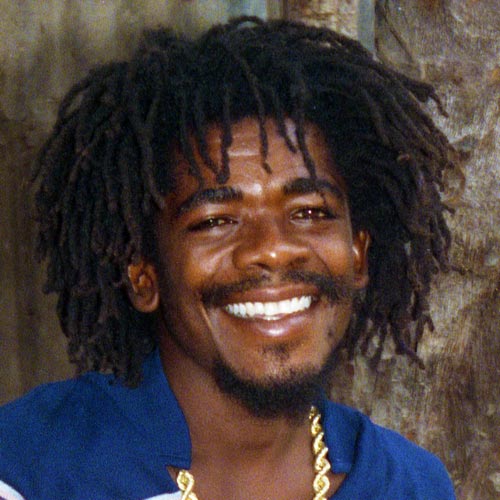 Cocoa Tea – Music Is Our Business

Almost exactly 11 years after VP Records released the two-CD set “Reggae Anthology: The Sweet Sound Of Cocoa Tea” through their subsidiary 17 North Parade, they now unleash another worthwhile compilation of the singer whose voice is as sweet as his name. “Music Is Our Business” tells the story of the successful collaboration between Jamaican singer Cocoa Tea and producer/engineer Bobby Digital over the period between 1987 and 2004.

Cocoa Tea was born Calvin George Scott in 1959. In 1974, at the tender age of 15 after gaining experience and exposure in school and church choirs he recorded his first single “Searching In The Hills”. This was not a successful bid into a career in music, so he continued to work as a racehorse jockey and fisherman for several years, but he also kept performing on various soundsystems on the island. In 1983 he moved to Kingston were he teamed up with ace producer Junjo Lawes. With him he recorded two of his biggest hits, “Rocking Dolly” and “Lost My Sonia”. The latter was the song that bust him. The debut album “Weh Dem A Go Do…Can’t Stop Coco Tea” was released in 1984. At the dawn of the digital era his talent became sought after by many of the top producers on the island. He recorded the bulk of his material for the dominant hit-maker of the second half of the ’80s, producer King Jammy.

Robert Dixon aka Bobby Digital helped shape the computerized phase of Jamaica’s popular music at Jammy’s headquarters. He rose to the position of Jammy’s chief engineer and right-hand man, and it was at Jammy’s studio that he formed relationships that were to be important to his later career as a producer. The most significant persons of these relationships included Steely & Clevie, the then relatively unknown deejay Shabba Ranks and Cocoa Tea. When Bobby Digital branched out on his own, it were Cocoa Tea’s “Love Me”, across a recut of the “Real Rock” riddim, and the moody “Lonesome Side”, on a relicked version of Junior Byles’ “Fade Away”, that became two of his earliest successes as producer. Bobby Digital actually had a talent for spotting a classic riddim that had not been versioned over and over again, and then giving it a very refreshing reworking. After his initial successes with Bobby Digital, Cocoa Tea regularly returned to the producer, and their hits together have taken in the full range of reggae music, including ‘reality’ tunes, tender lovers outings, sound-clash anthems and some great combination tunes.

The 20 track CD-Digipak “Music Is Our Business” is a premium blend of the very best of Cocoa Tea’s 7″ singles put out on the Digital B label plus a gold leaf selection of previously unreleased master recordings. Things gets started with the 2000 released single “Easy Nuh”, a solid tune across an appealing relick of the “My Conversation” riddim. Next up is a previously unreleased cover of Dennis Brown’s “Things In Life”, followed by a decent enough cut on the “Copy Cat” riddim from 1997, “Ready Again”. A reworking of Alton Ellis’ “Breaking Up Is Hard To Do” riddim underpins the gorgeous “Smile” from 1995. Completing the opening is the first lovers piece of this collection, “She Is My Baby”, a cut across the 1999 released “Lover’s Paradise” riddim. A real nice sounding tune and solid enough opening in full.

Best Of The Rest

Looking down the tracklist, it’s obvious that it includes a whole heap of tunes that surely will please Cocoa Tea’s many old and new fans. It actually begins with the 1994 released single “Magnet And Steel”, a big tune on the “Stalag” riddim, which is followed by the early digital reggae scorcher from 1987 called “Lonesome Side” and the 1994 released huge “How Dem Flex”. And it doesn’t stop here! The wickedness continues with “Must Get A Blye”, an updated version of the song Cocoa Tea did for producer Carlton Jackson in 1984, the superb “Stand Up Straight” across the “Bend Down Low” riddim, and 1997’s strong “Wicked Man” on the “Satta” riddim. Six tracks in a row that are really worth going on repeat! The last part of this album includes a previously unreleased cover of the Abyssinians’ anthemic “Declaration of Rights”, Cocoa Tea’s popular cover of Bob Marley’s “Waiting In Vain”, and a beautiful version of Delroy Wilson’s “I’m Not A King”. And there’s also the killer “No Push Over”, on the relicked riddim of the Wailing Souls’ “Mr. Fire Coal Man”, plus the noteworthy lovers tunes “Come On Home” and “Hurry Over”.

Conclusion A truly must-have collection of mostly golden tunes of one of reggae's top vocalists.