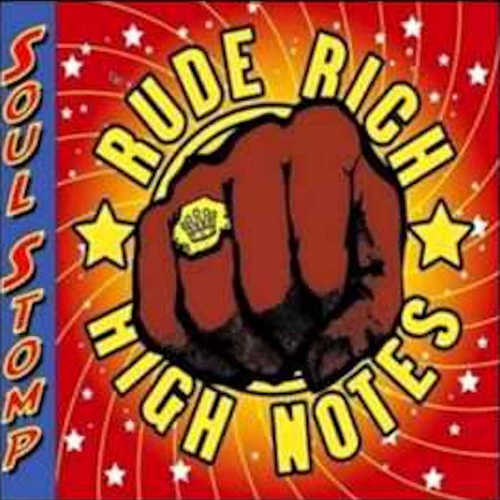 After their 1999 debut “The Right Track” and their first album release on Grover Records “Change The Mood” – of which the title track appeared on the compilation “Kingston Lounge” – this third studio album has been recorded at their own High Notes Studio with Rude Rich & the High Notes saxophone player Rob ‘JP’ Berends pushing the buttons. An excellent backing band as well, they have done a perfect job alongside Alton Ellis and Rico Rodriguez at 2003’s Reggae Sundance, and with legendary Studio One and Treasure Isle DJ Dennis Alcapone, as well as having been recorded live in 2003 alongside Derrick Morgan at the Rosslau Ska Fest for the Grover Records release “Derrick Morgan Meets The High Notes Live”.

Their now reissued third studio album “Soul Stomp” is a very satisfying and entertaining mix of classic Jamaican tunes and original material. Opening with the 1966 Prince Buster semi-instrumental tune “Prince Of Peace”, containing the immortal Muhammed Ali one liner ‘float like a butterfly, sting like a bee’, followed by a tune the often overlooked superb singer Freddie McKay recorded in 1971 for Coxsone Dodd’s Studio One, the beautiful “High School Dance”, and the Corporation 1970’s “Walking Through Jerusalem”, that must have been an inspiration for the Selecter’s 80s “My Collie (Not A Dog)” and of which the original version was rereleased on Trojan Records’ “Dancehall 69 – 40 Skinhead Reggae Rarities”. The Coolies’ “On The Bank” gets the Rude Rich treatment next to full effect with a wonderful flute solo capturing the listener’s attention.

It’s almost unbelievable how authentic the sound of this 9-piece Dutch outfit and their 4 guest musicians is. The wonderful thing is, if you cover so many classic tunes on your albums, it’s difficult not to stay behind with your own material but this is easily avoided by excellent self-penned tunes like the instrumental ska of “Everything Is Everything”, the moving “More Love” and the (hence the album title “Soul Stomp”) obviously James Brown inspired “The Punch”. Back to the classic Rude Rich and the High Notes head for a tune highlighting the skill- and soulful play of keyboardist Peter ‘Ras P’ Klaassen, Jackie Mittoo’s 1970 Studio One scorcher “Hot Milk”. Almost as if this album was preliminary released as a tribute to Coxsone Dodd, Ernest Wilson’s “Money Worries” was also recorded at Studio One in 1967, and shows how well lead singer Tobias Breekveldt delivers these classics.

From Byron Lee’s stable stems the original recording of the Blues Buster’s “I Won’t Let You Go”, before the high level is maintained by another original tune: “Tom Steady”, written by tenor sax player Thomas ‘Tommy S’ Streutgers and a take on “Old Times” the Heptones recorded in 1973 for Alvin Ranglin and of which the original take can be found on “The Meaning Of Life”. The great thing is that Rude Rich and the High Notes really know their classics, as they show in the next tune, a tune that lend its name to a whole series of successful compilations, the Blue Bells’ Lee ‘Scratch’ Perry produced “Tighten Up”. Next up is Prince Buster’s “I’m Still Waiting”, not to be confused with the Wailers’ tune, this is a totally different, but lyrically completely same-themed tune.

They pay hommage to the man who used them as their backing band in November 2002, by covering Alton Ellis 1965 “Ska Beat”, a tune proving that Elephant Man isn’t the first one to build his tunes around dance instructions. Another Vincent Chin production is done over, the (surprise!) 1968 Lord Creator song “Come Down ’68”, before a next Lee Perry production is featured, the Bleechers’ 1969 “Check Him Out”. The most wonderful thing about this album is that Rude Rich and the High Notes have the nerves to close it with another original, and “Simplify” is a tune that is as much a great Jamaican tune as the songs preceding it.

Conclusion All in all this is another absolutely top-notch Dutch Ska album.