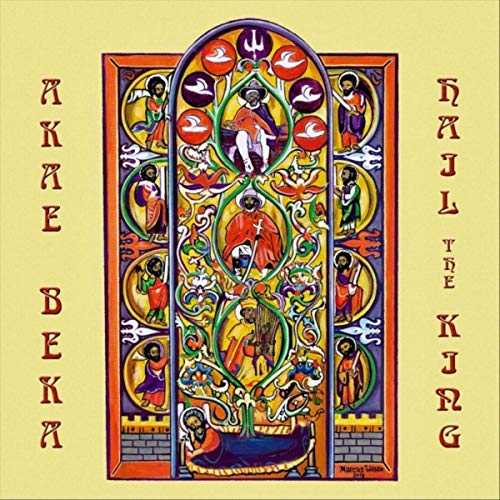 Esteemed singer, poet and thinker Vaughn Benjamin, formerly known as the voice of Midnite, has adapted the name Akae Beka when he chose to continue his music career as lead singer of Akae Beka in 2015. Since he and Midnite entered the reggae scene in 1997 with the “Unpolished” set, the man has been extremely busy and his output is truly incredible. Within a period of 22 years he has been involved in numerous projects which led to the release of more than 60 full length albums. Besides that he also published a book of poetry titled “Koll Pekude: Word, Sound & Poems” in 2006.

For his latest studio album entitled “Hail The King”, the eighth under the name Akae Beka, the charismatic artist from the US Virgin Islands has again teamed up with California’s Higher Bound Productions, which was founded by Ryan Willard in early 2000. Previous releases Midnite/Vaughn Benjamin/Akae Beka did with Higher Bound Productions include: “Bless Go Roun” (2007); “Ark A Law” (2010); and “Free Indeed” (2013).

Akae Beka’s distinctive chanting style has retained the same radiance even after so many years and albums, and also lyrically the well certainly hasn’t dried up. His lyrics are like some ancient text full of wisdom, and timeless. They are intended to make the listener think. As usual the lyrics outline a whole series of human atrocities against themselves and the environment. This all, is delivered over hypnotic, mystical riddims, which were recorded with live instrumentation at the Higher Bound Productions studio. The majority of the players of instruments involved in this project are members from the original Midnite band – currently playing in the Akae Beka band. Thus, the sound will resonate fully with longtime loyal Midnite/Vaughn Benjamin/Akae Beka fans as it has that raw St. Croix roots feeling of some of the earliest work. Most of the riddims are made up of only drums, a deafening bass and guitar, although here and there a riddim is enriched with horns, keyboard, percussion and acoustic guitar, ensuring that boredom doesn’t set in.

“Class Warfare Scorn”, the song that gets the album started, has the sound & vibes the longtime fan knows so well and appreciates so much. Great opener. Next comes the solid “One Mind”, which might require more time to grow on you. Almost the same can be said about the last track of the opening part, the totally different vibed “Estevanico”, at which a danceable tempo is transformed into a magical riddim. “Fountain” is an absolutely scorching effort and one of the best songs on this album, which actually can also be said about the next track, the compelling environmental piece “Earth Repair”. And to top it off, it’s followed by “Fe Prominence”, a huge tune with incisive lyrics. Besides that it’s the beautiful backdrop which takes a most appropriate and deserved center-stage and thrills for around 4 minutes. Then there’s the crucial “New Race”, a very interesting and fascinating song that can be ranked amongst the highlights of this collection. It’s followed by “Solid Sense”, a very nice and solid song, and the title track, “Hail The King”, an outstanding and such a satisfying praising tune. Things are rounded off by the heavyweight sounding “Winners On The Ground”, a great closer of this “Hail The King” album.