The Mighty Diamonds – Thugs In The Street 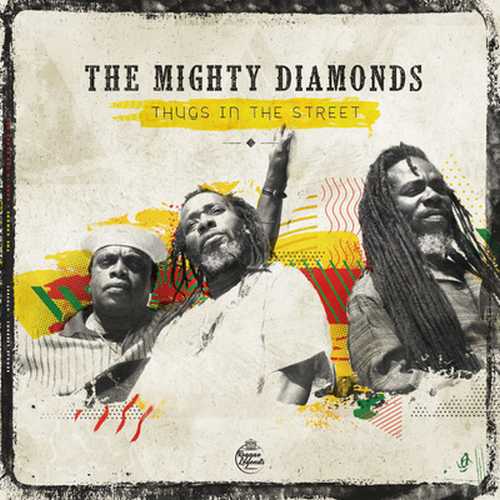 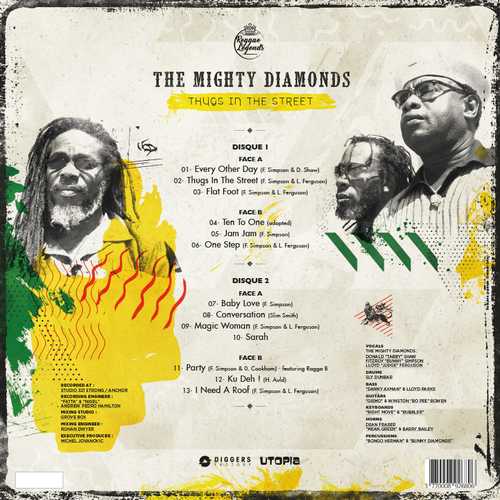 The Mighty Diamonds – Thugs In the Street

One of Jamaica’s greatest three part harmony groups, the Mighty Diamonds, was formed in 1969 by lead vocalist Donald “Tabby” Shaw with Fitzroy “Bunny” Simpson and Lloyd “Judge” Ferguson providing the harmonies and occasional lead. Their smooth harmonies and choreographed stage show were inspired by Motown vocal groups of the 1960s, with Shaw listing The Temptations, The Stylistics, The Impressions, and The Delfonics as influences as well as Jamaican rocksteady artists such as John Holt and Ken Boothe.

The trio recorded several singles for a variety of producers, but their major breakthrough came almost a decade later when they teamed up with Channel One’s Joseph Hookim who produced the group on a series of hits, leading to a contract with Virgin Records and the release of their classic debut, Right Time, in 1976. In the 1980s, their song Pass the Kouchie became an international hit and that success was repeated when it was covered by Musical Youth.

True to the roots

Throughout their enduring career the Mighty Diamonds remained true to their roots and maintained the style which first brought them international notability. Tabby, Bunny and Judge have produced over 40 albums and uncounted singles in their long career.

Thugs In The Street

The creators of classic hits such as Pass The Kouchie, I Need A Roof, Country Living and Have Mercy recorded an album in 2006, Thugs In The Streets. Two years later they got involved in the Inna De Yard project, resulting in the release of an album with acoustic versions of classic songs performed with nyabinghi drums. The aforementioned Thugs In the Street set is now released as a high-quality vinyl double lp.

It features a stellar line up. Check the likes of Sly Dunbar, Lloyd Parks, Danny Axman, the recently deceased Winston “Bo Pee” Bowen, Dean Fraser, Tony Green, Bongo Herman, Right Move and Bubbler who were on board as backing musicians. Recording studios were Anchor Studios and Studio 321 Strong in Jamaica.

The Mighty Diamonds have recorded an album with traditional and contemporary sounds. The listener gets treated to a smart combination of rootsy songs and dancehall flavored tracks. Every Other Day is a solid remake of their own song One Brother Short across the Satta Massagana riddim. One Step is a satisfying do-over of one of their hits, the beautiful Heads Of Government. Ku Deh! uses snippets of the Lecturer riddim and Flat Foot is underpinned by the bassline of the Keith & Tex hit tune Tonight.

Dancehall inspired titles are Party (featuring a young deejay called Ragga B) and a hip-hop remake of one of their most beloved tunes, I Need A Roof. With Jam Jam the trio even goes into soca/calypso territory. Also included here are two well done covers of classic rocksteady tunes, namely Conversation, originally My Conversation by Slim Smith & The Uniques and the Curtis Mayfield composition Ten To One, which was first recorded at Studio One by the Mad Lads.

Lovers rock is presented with Black Magic Woman, across the immortal Shank I Sheck riddim and Baby Love which takes the backbone of Ernest Wilson’s Undying Love hit. Then there’s Sarah, with its perfect rocksteady feel, a wonderful lovers tune!

Limited Edition - Get Your Copy Here!

Conclusion Thugs In the Streets sees The Mighty Diamonds in fine style!