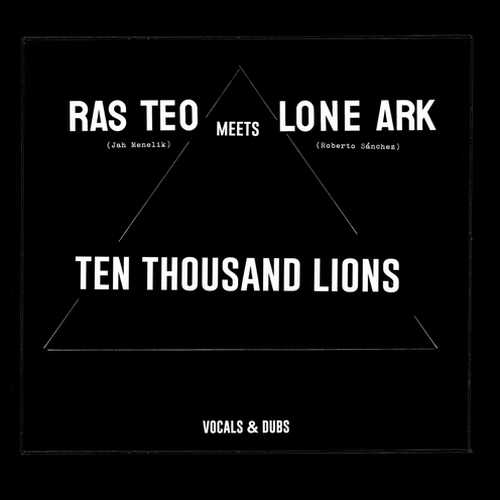 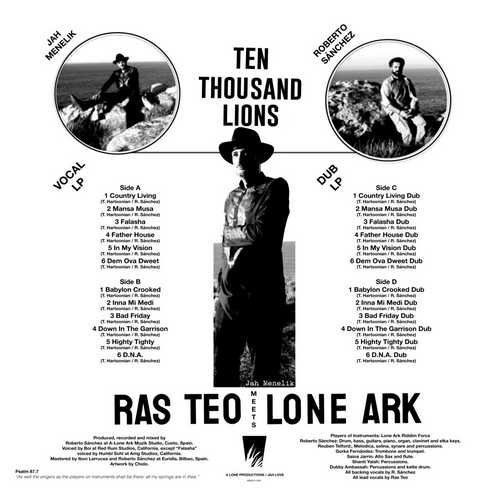 The bond of Moses and Aaron was strong enough to move mountains. Ancient lineage that’s a Lion paw imprint in 2018. With the mysticism of The Most High, two messenjahs of King’s Music have rallied together like rolling thunder atop Kilimanjaro. Rootsman RAS TEO has joined musical forces with masterclass producer/musician ROBERTO “El Scientist” SÁNCHEZ; a match created in Zion vision. Mr. Sánchez has delivered timeless albums with a Royal roll call of veteran artists; the rising essence of Mr. Hartoonian “was exactly what he’s been waiting for”. You are holding a Royal testament that exudes the pride of Lions, “TEN THOUSAND LIONS”. This full length vocal/dub excursion is a preservation and realization of King’s Music, real authentic sound. A spectrum of glorious vibrations that recalls an era when message music was created undiluted in Kingston town. 24 tracks elevated with fresh and urgent buoyancy… echoes of yesterday, today and tomorrow.

“TEN THOUSAND LIONS” is a mirror reflection of total commitment; an unwavering grasp of Roots theory intertwined with branches of original reasoning. Before delving further, it’s necessary to discuss the musical brothers who trod triumphantly within this masterpiece. Ras Teo (Teo Hartoonian) reflects the notion of “rise in the strength of JAH”. His movements of the past two decades are conscious elevations with no deviations. From his California outpost, his early offerings like “Mystic Morning” gave way to the powerful statements of “Bredda Daniel”, “Timeless” and “Ancient Hymns”. His Rootsman credentials are cemented within the Roots fraternity and the forward bound vision is embraced across Creation. His deep catalogue brims with bonafide veterans. Prince Alla, Fred Locks, Johnny Clarke, Pablo Gad, Sizzla and many more have graced his sound. Riddim masters like Horsemouth Wallace, Santa Davis and Calvin Cameron elevate the mystic levels. His endurance has and is fueled by heartical souljahs. Elder statesman Fred Locks has been omnipresent in his runnings. Teo’s Red Rum Studio engineer Boi has been committed for years, alongside UK veteran I-David. Ras Zahir (Blackheart Warriors) has helped finance the glorious works. RAS TEO steps to a higher level on this Zion clad double album.

Roberto Sánchez’s contributions have been brewing since the mid ’90s. From his outpost in Santander, Spain, he honed his musical skills in bands like Love Watti and Better Collie from ’94-’98. He started A-Lone Productions in ’97 and has never looked back. He produced Edi Fitzroy, Rod Taylor and Little Roy slices for other labels before focusing on Lone Ark albums. By 2010, he captured world wide attention with Earl Zero’s “And God Said To Man”. His wise approach of vintage equipment and crucial mixing has led to a plethora of classic albums. Talking about Earl 16, Milton Henry, Vin Morgan, The Viceroys, three Alpheus albums, Ines Pardo… the catalogue is impeccable. Roberto champions The Golden Age, from lyrics, riddims and engineering. The Lone Ark Riddim Force (he’s a principal player) provides riddimatic power that exemplifies the evolution of Jamaica music history with absolute grasp and original tones. Volumes may be spoken about his soundscape and approach, bottom line is that his vision coincides with Ras Teo’s ethereal vocals like ital stew. When asked about working with Teo, Roberto states “Ras Teo for me is a timeless artist, like those we used to look as an inspiration (like Hugh Mundell). That’s because you can feel what he says; it’s true – it comes from the Heart”. The Rootsman has worked with a stellar list of producers (Reuben Addis, I-David, King Earthquake…) with Ites results. After listening to this album, you’ll feel the absolute respect of singer and producer. The term, “Roots Revival” has been mentioned for years. Doesn’t apply here, because this duo has been on the Roots train since they embarked on their respective journeys; full locomotion with no stops…

The material on “TEN THOUSAND LIONS” is prolific, both vocally and dubwise. Ras Teo’s commanding delivery explores important history and unapologetically observes today’s turmoil. Roberto and his skilled ensemble create a musical backbone that complements the word, sound ‘ave power. “El Scientist” created ethereal riddims and razor sharp mix in two months. His projects usually take a month to realize; he took the extra time due to the serious nature of the project. Cutting no corners in this area! The Lone Ark Riddim Force fuels Zionic power. Roberto’s musical skill set equates to his work in the production chair; stellar on drums, bass, guitar, piano and synare/elka keys. Longtime member Reuben Telford returns on organ/melodica/clavinet/percussion. The powerful horn section is on board. Gorka Fernandez and Saioa Fernandez have elevated a myriad of prior releases. Trombone/trumpet/sax and flute in full effect. Shanti Yalah and Dubby Ambassah (whose long links with Roberto are tremendous!!) bring percussive tones. This collective creates a Zionesque music platform across this Ites, Gold and Green print.

Ras Teo is a true Rasta; spokesman for The Almighty. “Country Living” takes the listener to fertile ground. Rustic and Heartical wailing on par with detonating horn arrangements and Pablo level organ work. Roberto captured this sound with an Italian crafted Elka keyboard that captures strings, clavinet and electric piano. The same equipment Horace Swaby used for years. Teo is a Roots teacher on cuts like “Mansa Musa” and “Falasha.” The former recalls Musa I, one of the wealthiest warriors in history who ruled over Mali. The latter teaches about the descendants of Menelik I (son of Sheba & Solomon). Deep Kushite sounds with Channel One vibrancy. This artist touches on subjects of total importance. History that is not readily recalled on today’s albums. “Father House” is blessed with a Rockers sound driven by relentless drum and bass with sky high horns. This singer is inspired by majestic artists who paved the way; the ethereal tones of Lacksley Castell come forward. The essence of Hugh Mundell are omnipresent in the broad soundscape of “In My Vision”. Ras Teo is a master wordsmith. “Dem Ova Dweet”‘s taut riddim sets the tone for “Rasta no rascal… Selassie I the gorgon.” The unity between Lone Ark and Ras Teo is hand in hand on “Ina Mi Medi”. Teo trods down Ital road with absolute synchronized lyrics to riddim cooperation. Augustus Pablo levels thrive alive in this anthem. Urgent history is on the scene with “Bad Friday”. The 1963 Coral Gardens incident involving Bustamante’s intent to “capture Rasta”. A tragic loss of Life that the Rootsman delivers in Dread power. Versatility has been a mainstay in artist and producer’s prior works. The urgency of late ’70s Roots Music that flowed from England is embraced on the amazing “Hitey Tighty”. The passion of Reggae music history flows through the structure of these ambassadors!

The majority of Roberto’s full length productions bear a showcase style. This time around, he took leaps and bounds and constructed “TEN THOUSAND LIONS DUB”. Mr. Sanchez has been given the moniker “El Scientist” for more reasons than one. His original mastery on the mixing board is influenced by the legendary Scientist, but his ability to dash in intoxicating Dub ingredients is world renowned. This Dub disc has a range of nuances; from King Tubby to Bunny Tom Tom, Errol Thompson to Peter Chemist and Scientist to Neil Fraser. His original Dub theory is a natural mystic that blossoms and blooms with the aforementioned ground breakers. This Dub country has a true ’70s feel; reel to reel to Golden times. “Country Living Dub” has a Tubby’s edge that allows the Pablo-esque organ to flow. “Mansa Musa Dub” bears the excitement of a Bunny Tom Tom excursion. “Falasha Dub” and “Father House Dub” exudes a Tubby’s/early Scientist atmosphere. “In My Vision Dub” is Scientist strong! “Ina Mi Medi Dub” is a classic mid ’70s touch; Roberto adds potency with Mad Professor caliber. His clearview grasp of Dub history is simply amazing. “Bad Friday Dub” bears the imprint of Errol Thompson’s crispness. Manners and respect front and center on “Hitey Tighty Dub”. To complement the UK tones, Roberto inflects Dub detonations that Michael Campbell exacted on Aswad’s “New Chapter Of Dub”. Bear in mind, this is no carbon copy situation. Mr.Sanchez has the ability to embrace the realm of Dub in his own format but allows the strength of the aforementioned to ride in just right. “Master of his trade” applies with just cause.

Conclusion "TEN THOUSAND LIONS" and "TEN THOUSAND LIONS DUB" will keep the compass of King's Music forward. The earnest compositions are Royal positions. The undiluted approach from Ras Teo and Roberto Sánchez and Lone Ark Riddim Force will be recognized as a powerful musical episode in the rich progression of Reggae Music. Once you hear these musical discs, you'll feel what I'm talking about... Ras Teo and Roberto, thank you for presenting two slices of history.