Rita Marley – The Best Of Rita Marley-Lioness Of Reggae 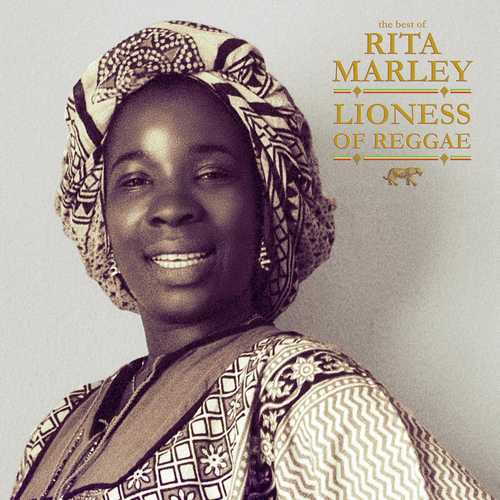 Rita Marley – The Best Of Rita marley-Lioness Of Reggae

Rita Marley, born Alpharita Anderson, was raised in the Trench Town neighborhood of Kingston, Jamaica, where she met with poverty at an early age. At the age of 18 she passed an audition at Studio One and started recording with two other young women in a trio called the Soulettes. They scored several hits and in 1966 she married Bob.

Both converted to Rastafarianism, a theme that Bob would use in many of his recordings. When Peter and Bunny left The Wailers to pursue solo careers Bob assembled a backing trio -the I-Threes- consisting of Rita with Judy Mowatt and Marcia Griffiths. During the 1970s the three woman became an integral part of Bob’s music.

After Bob’s death Rita released her first solo album, Who Feels It Knows It. This 1980 album saw Rita in fine shape and she released the follow up album Harambé in 1982. That album featured the worldwide hit One Draw. This song about the pleasures of ganja was banned by radio stations and thus fueled the sales of the album. It became the first reggae single to top the Billboard Dance Charts!
She released more music, but, more important though, is her work as founder of the Rita Marley Foundation. Now residing in Ghana, she is working on eradicating poverty and hunger, while empowering communities, in Africa, Jamaica and beyond.

The LP The Best Of Rita Marley-Lioness Of Reggae is a vinyl exclusive that features Rita Marley’s most iconic songs. This limited-edition includes a prologue by Beninese singer Angelique Kidjo and never before published pictures by Peter Murphy, Adrian Boot and Dennis Murphy. It’s released on Tuff Gong Worldwide, an off shoot of the original Tuff Gong label, founded in 2006 by Ziggy Marley. The two albums Who Feels It Knows It and Harambé (literally means “all pull together”) form the basis of this compilation set. It’s a superb collection of well know tunes, evoking warm and vibrant memories.

The album opens majestically with Harambe, her positive call for unity, that shows true emotion and wisdom. Included here is One Draw, the crossover song that was her biggest hit, as well as the awesome traditional roots reggae track A Jah Jah. That’s The Way, features elements of pop, soul, blues and funk, giving it a potent crossover vibe.

Rita gives the classic Wailers tune Who Feels It Knows It a fitting reworking, such a great song! On par is her do-over of Thank You Lord, here entitled Thank You Jah. Another Wailers cover is I’m Still Waiting, the moving, timeless lovers tune that The Wailers recorded in 1965 for Studio One. Not to be missed is the self penned tune King Street. It’s a an appealing musical tribute to the original Tuff Gong record shop located in Trench Town.

Good Morning Jah, with a typical Tuff Gong vibe, is a lyrical and musical masterpiece, Solid through and through. An updated version of Play Play rounds off this album. It was a rocksteady song, recorded in 1968 for the Wail ‘N Soul ‘M label.

Conclusion Outstanding retrospective collection from the Lioness Of Reggae.