Various – Dread Prophecy: The Strange & Wonderful Story Of Yabby You 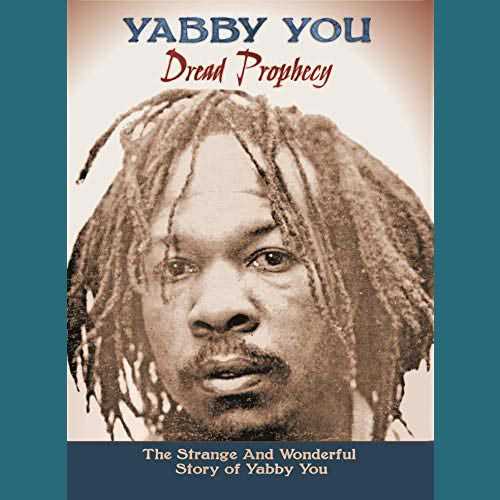 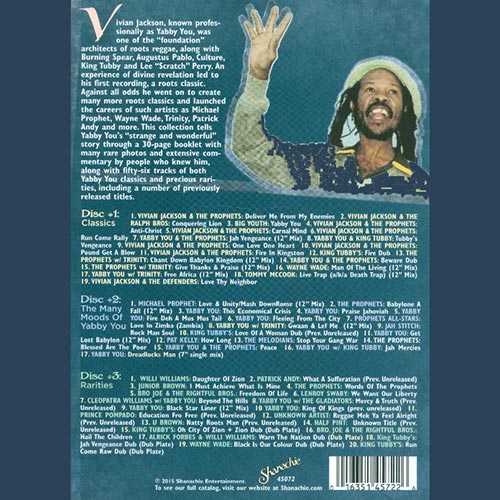 Various – Dread Prophecy: The Strange & Wonderful Story Of Yabby You

Disc 2 : The Many Moods Of Yabby You

Yabby You aka Vivian Jackson was born in the Waterhouse district of Kingston, Jamaica in 1946. One of seven children, Jackson left home at the age of twelve to find work at a furnace in Waterhouse. At seventeen, the effects of malnutrition had left him hospitalized, and on his release he was left with severe arthritis which had partially crippled his legs. His physical condition meant that he was unable to return to his previous work, and he was forced into hustling a living on the streets of Kingston. His beliefs were markedly different from that of his Rastafarian contemporaries, believing in the divinity of Jesus rather than Haile Selassie I, earning him the nickname ‘Jesus Dread’. This often prompted debate on religio-philosophical matters, and it was after one of these discussions that Jackson first headed towards a recording studio, having heard music “like a strange ting, inside a my thoughts – like an angel a sing”.

Another spell in hospital meant that finding money for recording was difficult, but eventually the “Conquering Lion” single was released late in 1972, credited to Vivian Jackson and the Ralph Brothers. Cut for King Tubby, the popularity of the song and its distinctive introduction (the chant of “Be-you, yabby-yabby-you”) earned Jackson the nickname “Yabby You”, which has remained with him during his entire career.

The next few months saw the recording of several more singles, released under different names on various record labels, (although usually credited to Vivian Jackson and the Prophets, and often featuring a King Tubby ‘version’ on the b-side); culminating in the release of the “Conquering Lion” album. A King Tubby mixed dub set, King Tubby’s “Prophesy Of Dub”, was also issued, albeit on a limited run of 500 copies, and the release of two more landmark albums (“Walls Of Jerusalem” and “Chant Down Babylon Kingdom”) established Yabby You as a major roots artist.

Yabby’s success allowed him to branch out as a producer, and he began working with both upcoming and more established artists including Wayne Wade, Michael Rose, Tommy McCook, Michael Prophet, Big Youth, Trinity, Dillinger and Tapper Zukie, while continuing to release his own material. Yabby You continued to record, produce and perform (often with the aid of crutches) until the mid-1980s. He re-emerged in the early 1990s, issuing both new and old material, and his recordings have been the subject of several high quality reissues in recent years. In 2000 he released a singles remix project with Glen Brown. The album included remixes of “Conquering Lion” by Smith and Mighty, and a remix of Glen Brown’s “Leggo The Herb Man Dub” by Small Axe and Terminal Head. He died on 12 January 2010, aged 63, after suffering a ruptured brain aneurysm. 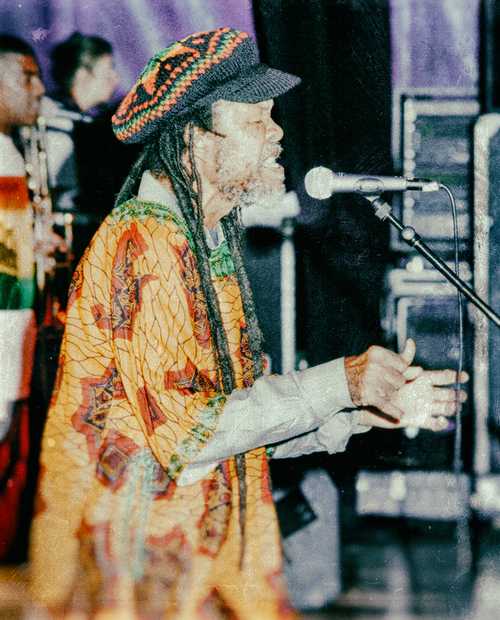 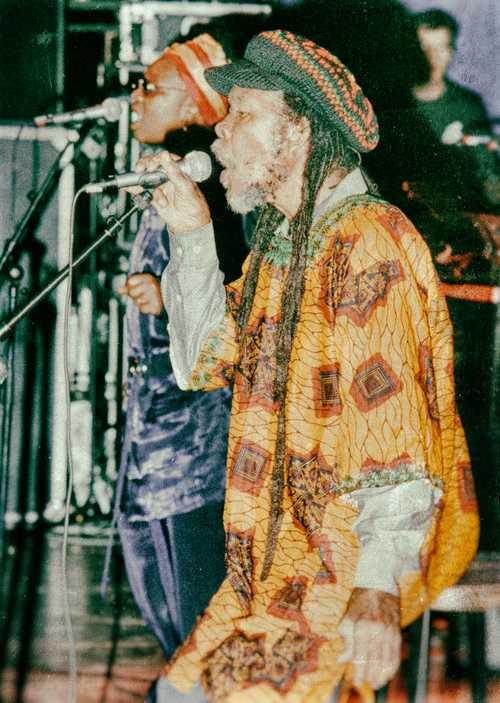 Recently Shanachie Records released the Willi Williams/Yabby You project titled “Unification: From Channel One To King Tubbys With Willi Williams And Yabby You,” which includes tracks recorded in the late seventies. Their latest project is called “Dread Prophecy: The Strange And Wonderful Story Of Yabby You” and it is an impressive collection of classic Yabby You tunes  and from other artists he produced as well as sought-after rarities presented in a “long” DVD-style package including 3 audio CDs with 56 tracks – over 3 hours of music with 10 previously unreleased tracks and 30 tracks never previously on CD. But there’s more! It comes with a stunning 28-page booklet with personal essays from people who knew him: David Katz (author of Solid Foundation: An Oral History Of Reggae), Alex Peacemaker (producer and long-time compatriot of Yabby You) and Randall Grass (author of Great Spirits: Portraits Of Life-Changing Musical Artists and Yabby You’s longtime friend), and excerpts from Yabby’s interview with Roger Steffens (author of The Reggae Scrapbook) and 22 photos, many never previously seen!

“Dread Prophecy: The Strange and Wonderful Story of Yabby You” is filled with undiluted roots music and is divided into three sections. The first CD shines on his best known recordings from the seventies; the second disc (“The Many Moods Of Yabby You”) features his quality productions of artists such as Trinity, Pat Kelly, The Melodians, Michael Prophet and Jah Stitch, but also dub versions, alternate mixes and instrumental versions. The third disc is called “Rarities”, however, “rare” is a relative term when it comes to his work. The bulk of his output could be considered rare by normal standards; of those only issued on vinyl singles, many of them were pressed in quantities of 500 copies or less. Several of the tunes on Disc Three were restored from tapes and DAT tapes.

Disc 1 carries his best known work. The aforementioned tune “Conquering Lion” is rightfully followed by Big Youth’s deejay version. Drawn from his debut album “Conquering Lion” are the tunes “Anti Christ”, “Carnal Mind” and “Run Come Rally”. The truly powerful “Jah Vengeance” is present here as a 12″ single, with Tubby’s mix finishing it in true echo and delay style! The anthemic ‘Chant Down Babylon Kingdom” is featured in its full extended mix, including the deejay cut by Trinity. The deejay also delivers his chanting qualities in “Give Thanks & Praise”, a wonderful tune, and “Free Africa”. Bunny Lee’s ‘flying cymbals’ style can be heard on Tommy McCook’s killer “Live Trap aka Death Trap”. The tune includes the haunting flute playing of Tommy!

The Many Moods Of Yabby You

Disc 2 shines on the man’s production qualities. It starts in heavy style with Michael Prophet’s classic roots tune “Love & Unity aka Mash Down Rome” inna 12 inch fashion! In the same extended fashion The Prophets deliver “Babylon A Fall”, a reworking of Yabby’s tune “Conquering Lion”. “Praise Jahoviah”, “Fire Dey A Mus Mus Tail” and “Fleeing From The City’ are all from the 1985 set “Fleeing From The City”, Yabby’s first authorized solo album release since 1987. Trinity’s murderous “Gwaan And Lef Me” is across the “Jah Vengeance” riddim. Another ’70s deejay, Jah Stitch, is included here with a killer tune called “Rock Man Soul” for which he rides the “Cherry Oh Baby” riddim. Patrick Andy covered Horace Andy’s “Love Of A Woman” and here we get treated to the unreleased dub version by King Tubby. Pat Kelly, one of Jamaica’s best singers, does a reworking of his own hit “How Long”, while the rocksteady group The Melodians brings the anguished “Stop Your Gang War”.

Finally Disc 3, the most interesting part of this majestic release. It features rare gems and previously unreleased recordings by Yabby You and artists like Willi Williams, U Brown, and Prince Pampado. Furthermore it features several dub plates recorded for sound system use. The CD starts with Willi Williams delivering “Daughter Of Zion” a fine 1979 tune and is followed by Patrick Andy’s “What A Sufferation”, a previously unreleased tune from the (also) unreleased album “Best Of Patrick Andy”. Would love to hear that one… Obscure vocalist Junior Brown brings a little gem called “I Must Achieve What Is Mine”. Leroy Swaby, yet another unknown vocalist, makes a solid impression with “We Want Our Liberty”. The disc contains two tunes by Bro Joe & The Rightful Bros., a trio consisting of Yabby You, Rydel Johnson (The Congos) and Albert Griffiths (The Gladiators). Cleopatra Williams and Yabby You get together for the tune “Beyond The Hills”. a solid tune! For the first time around is his song with The Gladiators called “Mercy & Truth”. The tune “Black Star Liner” is included on the album “Yabby You Meets Trinity – At (King Tubbys) Dub Station”. Here the listener can enjoy the 12″ version of the song. The deejay Prince Pompado cut several tunes for Yabby You, “Education For Free” being one of them. The disc ends with several dub plates. Among them the truly exceptional roots scorcher “Oh City Of Zion/Zion Dub”, an alternative Yabby You vocal to the “King Pharoah’s Plague/Jesus Dread” riddim mixed by or at King Tubby’s. Wayne Wade’s “Black Is Our Colour Dub” probably is the best known tune here. Tubby’s does a raw dub of “Run Come Rally” and gives his best while reconstructing “Jah Vengeance Dub”. Wicked!