Various – The Mystic World of Augustus Pablo: The Rockers Story 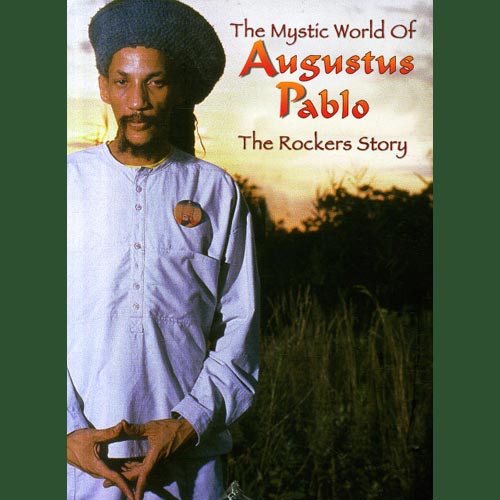 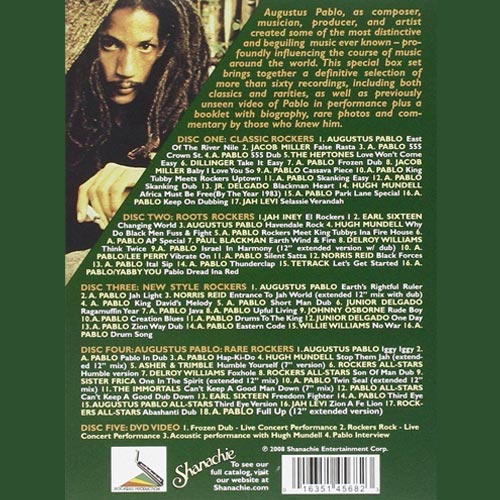 Various – The Mystic World of Augustus Pablo: The Rockers Story

The US based label Shanachie has released 8 Augustus Pablo albums over the years. Their latest effort is a wicked boxset, including 4 CD’s and a DVD. Although the set contains 67 tunes, it’s just impossible to capture Pablo’s unequaled musical talents to the fullest. He has recorded and produced such an amount of fine tunes that it’s not fair to label this release as ‘the definitive collection’, but they sure did a very nice job! Disc one and two contain some of his best productions. Disc three gathers together his digital work that started in the ’80s. While disc four contains rare tunes from all eras. The latter disc is a very good idea. There are so many rare tunes from Augustus Pablo that it is really good to bring a selection of them together so that all his fans can enjoy them.

Included here are timeless classics like Jacob Miller’s “False Rasta” aka “Too Much Commercialization Of Rasta”. Miller was in his early teens when he recorded this song for Pablo. He went on to be one of Jamaica’s greatest, most popular vocalists. “555 Crown St.” is the instrumental cut to that song, while “555 Dub” is the heavenly dub cut! “Baby I Love You So” is also here. The song is probably reggae most chilling lovers tune. Pablo recorded the original instrumental cut in 1973 – “Cassava Piece” – and reworked it later as a dub called “King Tubby Meets Rockers Uptown”. That dub is one of the masterpieces of the genre with King Tubby powerfully deconstructing the tune. The Heptones were the vocal trio of the late ’60s, recording hit after hit for Coxsone Dodd at Studio One. Here the group updates one of those hits “Love Won’t Come Easy” across the “Frozen Soul” riddim and Dillinger grabs the riddim for his deejay version called “Take It Easy”.

Junior Delgado was one of the better known vocalists Pablo worked with. Here he delivers “Blackman Heart”. In 1986 the singer cut “Raggamuffin Year” and that release gave Pablo highest commercial visibility he had attained in several years. Pablo’s young hypnotic protégé Hugh Mundell (he took him under his wings when he was about twelve years old) recorded the album “Africa Must Be Free By 1983” in 1979. With this album Mundell provided the near perfect overt distillation of the spirit with songs like “Why Do Black Man Fuss And Fight”, “Day Of Judgement” and “Book Of Life”. The title track “Africa Must Be Free (By The Year 1983)” is a moving testimony to the spirit of the times. Park Lane Special is the dub to that song. One of the most moving songs he recorded was “Stop Them Jah”. Here it’s included in the extended 12″ mix. Mundell also performed as a deejay under the name Jah Levi. “Selassie Verandah” and “Zion A Fi Lion” are two of his efforts. The under-rated roots singer Earl Sixteen, who recorded for a number of producers over the years, delivers with “Changing World” an impassioned tune. “Freedom Fighter” is a previously unreleased gem from this singer.

Norris Reid was another extremely talented Pablo protégé. He delivers a militant vocal on a cut of “Cassava Piece”, the same riddim Jacob Miller used for “Baby Love You So”. Another great tune he recorded for Pablo was “Entrance To Jah World”, which was previously only available on a Rockers 12″ single. Tetrack, led by Carlton Hines, was one of the few vocal groups produced by Pablo. Their album “Let’s Get Started” is one of the best ’70s rasta inspired vocal harmony group collections and includes the singles “Let’s Get Started”, “Only Jah Jah Knows” and the monumental “Isn’t It Time”. Willie William’s “No War” is a previously unreleased track from this fine roots vocalist.

The DVD (only 20 minutes!) contains four segments. Pablo in performance at JapanSplash circa 1986. There he performed “Frozen Dub”. Next comes “Rockers Dub” as filmed at PitSplash in Japan circa 1988. Part 3 is an impromptu performance footage of Pablo playing guitar an melodica, with Hugh Mundell singing by a river in Jamaica, 1979. The footage was part of the documentary “Word, Sound and Power”. Finally we get an interview of Pablo from 1979.

The set comes with a 20 page booklet with biography, rare photos, and commentary by those who know him.

Conclusion This box set is an excellent collection of Pablo tunes and production works. A nice addition for anyone who is familiar with the works of this great man, but definitely more suitable for those who have never dwelled in the mystic world of Augustus Pablo.