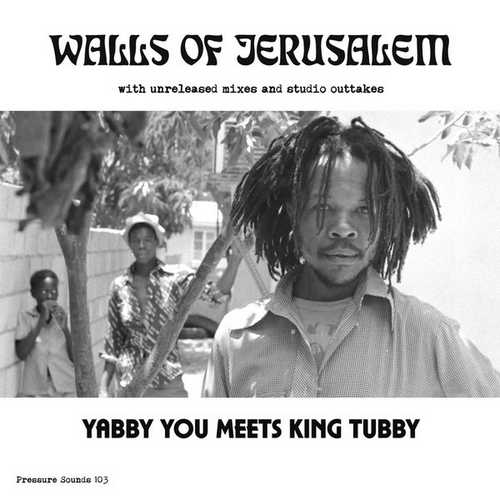 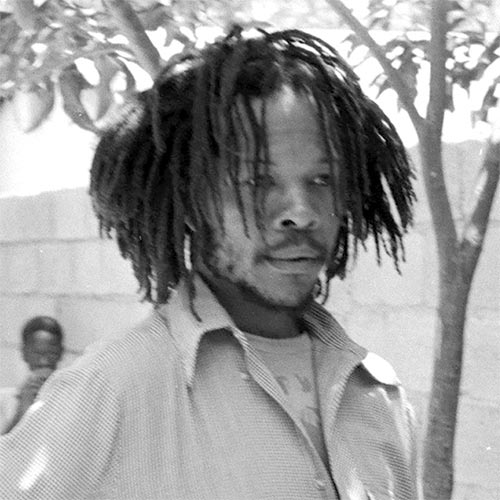 After having released the roots selections “Deep Roots” and “Deep Roots Part 2”, featuring tracks from Yabby You and artists he has worked with, and then the expanded version of Yabby You’s classic dub album “Beware Dub”, Pressure Sounds now treats the avid fan of roots music from the seventies to another excellent release of material from Yabby You’s extensive catalogue. The 103rd (!) release of the premier reissue label is a celebration of the extraordinary creative relationship that developed between producer/artist Yabby You and the legendary dub master King Tubby, one of the most important figures of Jamaican popular music.

This set includes the reissue of the Yabby You & King Tubby cult album “Walls Of Jerusalem” from 1976 in its original form on the first disc, along with never before released studio outtakes and alternate mixes of some of Yabby You’s most classic tunes as well as a number of hard-to-find versions on disc two. The original “Walls Of Jerusalem” album came out, in a pressing of perhaps 200 pieces, on the Prophets record label in a blank, white sleeve. in 1977, the LP, retitled “Chant Down Babylon Kingdom” with the artist misleadingly named as ‘Yabba Youth’, was released in the UK (with a cover) on the Nationwide imprint. And then there was also a reissue on the Prophets label, with Yabby You making his artistic intent clear by renaming it “King Tubby Meet Vivian Jackson (Yabby You)”, also crediting Tubby as arranger.

Although “Walls Of Jerusalem” was carefully mixed to master tape in full stereo, some later pressings and single releases from the album, like “King Pharaoh’s Plague”, were mixed down to mono, and when certain tracks have been included on latter-day compilations it are the mono versions that have been used. This release luckily enables the listener to hear the album in full stereo as Yabby and Tubby intended.

Disc one starts off with six prime vocal cuts by Vivian Jackson (Yabby You) & The Prophets, most of which had already been released in Jamaica on 7″ single before the album was put out. The King Tubby mixed dub counterparts of these songs form the second part of the disc and are fully the equal of those featured on King Tubby’s classic dub album “Prophecy Of Dub”.

The flawless chilling title track “Walls Of Jerusalem”, with vocals that move from side to side, opens the powerful set on disc one in great style. While the riddim is a real treat for the eardrums, it’s Yabby You’s heartfelt lyric on the crucifixion of Jesus Christ that gives this moving song an extra dimension. Equally flawless are the next five vocal tracks. The forceful “Chant Down Babylon” is a stellar roots piece, that every time you give it a listen raises the hair on your neck. In the awesome “Fire Round Town”, across a mournful riddim laid by Sly & Robbie at Channel One, Yabby You tours the war zones that were Kingston ghettos in the election year of 1976. Magnificent, to say the least, is the cautionary “Plague On The Land”, which is also known as “King Pharao’s Plague”. It’s followed by the matching boom tune “Tribulation” (aka “Sufferation”). Just like the previous vocal cuts, “Go To School Jah Jah Children” (aka “Black Man’s Land”) still sounds as righteously vital today as when it was first released. In the lyrics of this piece and also of “Walls Of Jerusalem”, “Chant Down Babylon”, “Plague On The Land” and “Tribulation”, the presence of biblical references is obvious.

Osbourne Ruddock aka King Tubby had taken a crucial role in creating and promoting Yabby You’s first studio production. It actually was Tubby who gave Vivian Jackson the name Yabby You, after the chorus of “Conquering Lion”. After their first collaborations they became good friends and were very close. Yabby You’s majestic riddims were ideal for King Tubby’s mixing style. Over the deep basslines of musicians like ‘Family Man’ Barrett and Robbie Shakespeare, he created mixes saturated in delay and reverb effects, which gave the impression of sounds coming across vast distances. Without any doubt, the half-dozen heavy-duty dubs from the “Walls Of Jerusalem” album belong to the best Tubby-mixed dub versions. They’re all superbly done and are prime examples of Tubby’s inventiveness when he’s behind the mixing board.

The second disc includes never-released studio outtakes and alternate mixes of some of Yabby You’s most classic tunes as well as a number of hard-to-find versions. An interesting aspect here is that a number of tracks includes the ‘chatter’ between the musicians and between King Tubby and Yabby You, which was discovered on the master tapes. Some truly worthwhile music, including a few really impressive tracks, can be fulljoyed when listening to this gorgeous selection. It starts with the great “The Man Who Does The Work”, known from the “Conquering Lion” album, advising wrongdoers that “Time longer than rope, and time gonna catch up on you!” “Valley of Joeasaphat” is another winner featuring Dada Smith as lead vocalist. Next drops an alternate mix of “Go To School Jah Jah Children”. Also known from the “Conquering Lion” set is “Love Of Jah”, a song with gentle spirituality. Tenorman Tommy McCook has done some high-quality instrumentals for Yabby You (think “Death Trap”) and here he’s present with one of them, “Sand In My Shoe”. Then there’s the previously unreleased version of “Jah Vengeance”, which is an outstanding instrumental piece. King Tubby’s killer “Greetings” (known from the album “Prophesy Of Dub”) fires on all cylinders – a track that goes on repeat!! Before this disc comes to an end with the great bonus tracks “Prophets Dub” and “Repatriation Rock”, the listener is treated to three all conquering dub works from King Tubby. Given the right volume, the highly inspired dubs features on both discs will surely get even the narrowest drainpipes flapping to the riddim.

Conclusion This "Wall Of Jerusalem" set is surely of interest to roots fans and dub lovers, but a must for those who want to extend their collection of Yabby You material.