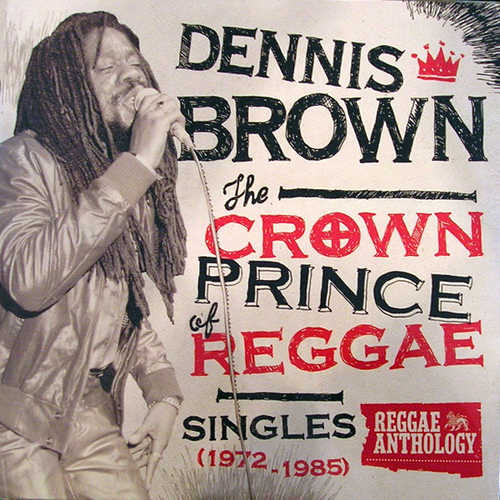 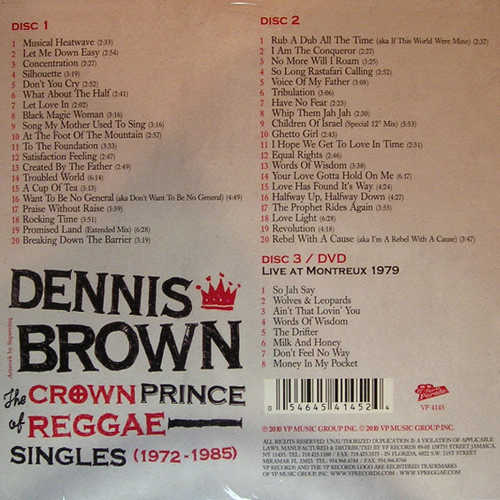 Having initially established his reputation at Coxsone Dodd’s legendary Studio One with the 1970 released LP “No Man Is An Island” (recorded when he was only 13 years old!), teen sensation Dennis Brown confirmed his great talent with a series of brilliant singles on a wide range of Jamaican and UK labels. However it was with Winston ‘Niney’ Holness, who produced Dennis Brown’s huge hit “Money In My Pocket” for Joe Gibbs, that the young vocalist enjoyed the most consistent run of success and started to raise his profile higher in the mid-1970s with classic roots statements and sultry lovers cuts. This compilation includes some fine Niney produced tunes such as “I Am The Conqueror”, “No More Will I Roam”, “So Long Rastafari Calling”, “Voice Of My Father” and “Tribulation”.

Dennis Brown connoisseurs consider his work for producer Derrick Harriott as essential as the slices he delivered for the Mighty Two (Joe Gibbs & Errol Thompson. Anyhow, here you’ll find the classic Derrick Harriott productions (all of them can be found on the 1972 “Super Reggae & Soul Hits” album) “Musical Heatwave”, “Let Me Down Easy”, “Concentration” and “Silhouette”.

Dennis Brown was also active as a producer and started his DEB label in late 1976, in association with Castro Brown, a Jamaican who ran the Morpheus label during 1975-1976 from his shop premises in Croydon, south of London. In addition to material by Dennis Brown, the label also released music by Gregory Isaacs, The Tamlins and Michael Rose with Black Uhuru. He also founded the Yvonne’s Special label. His first album for that label was “Satisfaction Feeling”. It came out in 1983 and contained fine slices such as “Rub A Dub All The Time”, “Satisfaction Feeling”, “Want To Be No General” and “Praise Without Raise”.

It’s nice to see that the album includes three Phil Pratt produced tunes. The popular Fleetwood Mac cover “Black Magic Woman” was released as B-side to Errol Dunkley & U Roy’s “Darling Ooh” on the Punch label. For Phill Pratt’s Sunset label Dennis Brown recorded the awesome “Let Love In”. He also enjoyed success with producer ‘Gussie” Clarke, check out the well known song “To The Foundation”. A lesser known gem is “Song My Mother Used To Sing” produced in 1972 by Herman Chin Loy of Aquarius Records.

His best known sides were those he cut for producer Joe Gibbs. On this compilation you’ll find the classics “Ghetto Girl”, “Equal Rights” and “Your Love Gotta Hold One Me”, to name but a few. A three album deal with A&M Records brokered by Joe Gibbs, failed to achieve success outside Jamaica mainstream wise. Tunes from that deal are “Love Has Found It’s Way”, “Halfway Up, Halfway Down” and the rootsy “The Prophet Rides Again”.

The fabulous “Promised Land” was a production by Dennis Brown, Aswad and Mikey Dread. Recorded in London for the Simba label in 1979 it became an instant roots classic. Here it’s presented in the ‘extended mix’ version. Another Dennis Brown roots classic is “Revolution”. He also cut some fine sides for producers Sly & Robbie, resulting in the superb album “Brown Sugar” in 1986.

In the ’90s Dennis Brown remained a name always worth watching out for. He passed away on July 1st, 1999. A whole generation of Jamaicans and reggae fans literally grew up with his music. A devout Rastafarian and a member of the Twelve Tribes of Israel Organization, Dennis Brown was a musical genius and it’s obvious that he’s still dearly missed. No doubt Dennis Brown (also known as the Crown Prince of Reggae Music) was one of Jamaica’s sweet- voiced singers, who has never limited himself to one style.

This package also includes the DVD “Live In Montreux”. It was recorded at the 1979 Montreux Jazz Festival in front of an audience that was very responsive to Dennis, who at this time of his life, was becoming known internationally. Backed solidly by Lloyd Parks and We The People Band, Dennis delivered his hits in fine style.

Conclusion All in all a fine collection of Dennis Brown tunes!