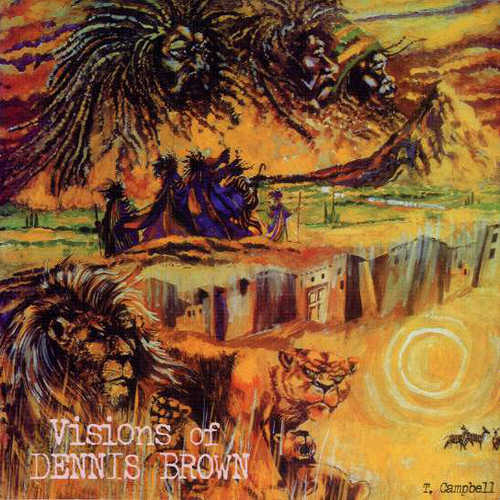 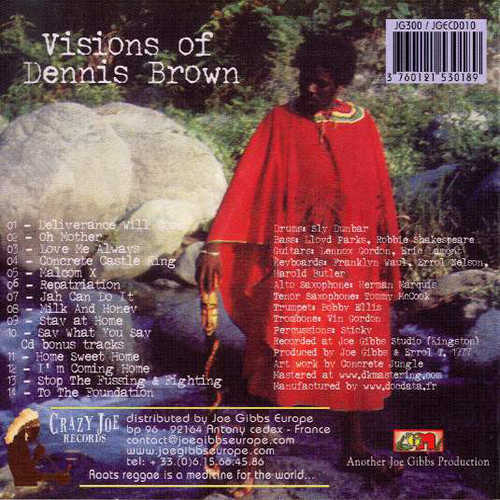 Having initially established his reputation at Coxsone Dodd’s legendary Studio One with the 1970 released LP “No Man Is An Island” (recorded when he was only 13 years old!), teen sensation Dennis Brown confirmed his great talent with a series of brilliant singles on a wide range of Jamaican and UK labels. However it was with Winston “Niney” Holness, who produced Dennis Brown’s huge hit “Money In My Pocket” for Joe Gibss, that the young vocalist enjoyed the most consistent run of success and started to raise his profile higher in the mid-1970s with classic roots statements such as “I Am The Conqueror”, “No More Will I Roam”, and “Wolf & Leopards”, to name a few. Further hits, as well as remarkably consistent albums with producer Joe Gibbs and engineer Errol Thompson (aka the Mighty Two) completed the process by which he earned the title of “Crown Prince Of Reggae”.

1977 saw the release of “Visions Of …”, the first full length Dennis Brown album released by Joe Gibbs and a proper album rather than a collection of singles like its predecessor, the classic “Wolf & Leopards” set. It proved to be one of the singer’s greatest and most compelling albums, and the one that helped establish his and producer Joe Gibbs’ dominant position in late 1970s reggae.

Some of the best tracks featured on this album, including the sufferer’s tune “Concrete Castle King”, the cover of Winston McAnuff’s “Malcolm X”, and the epic “Deliverance Will Come”, were not released as singles at that time, but had already gained notable popularity because they were played by soundsystems as if they were. Other highlights are the awesome “Repatriation” (the original vocal to the brutal “Jubilation Dub” on “African Dub Chapter Three”), “Oh Mother”, a superb cover of The Heptones’ “Love Me Always” and “Stay At Home” (aka “Ghetto Girl”), an incredible popular single that has been a ‘revive’ favourite ever since.

This reissue by France-based Crazy Joe Records contains four bonus tracks namely the wicked Bobby Bowa cut “Home Sweet Home” (loosely based around the melody of “Africa We Want To Go”), “I’m Coming Home”, “Stop The Fussing & Fighting” (aka “Together Brothers”) across a laid back cut of the “Real Rock” riddim, and the later cut of “To The Foundation” (wasn’t that a Gussie Clarke production?!).

Conclusion An essential album from a great singer whose untimely death in 1999 shocked the reggae world.