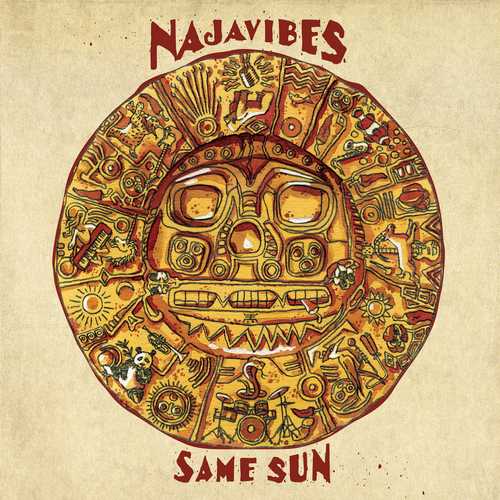 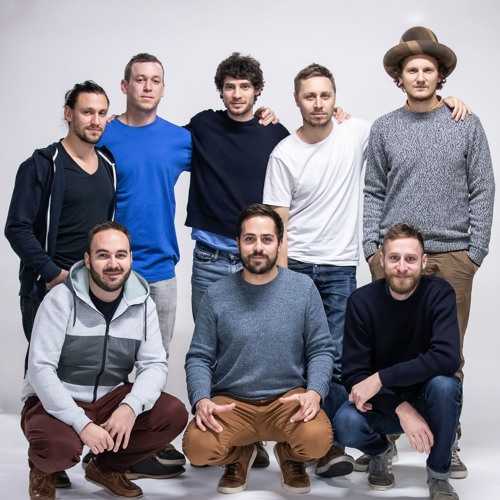 In recent years the Geneva-based reggae band Najavibes have been the driving force behind critical acclaimed albums and singles from artists like I Kong, The I-Twins, Oku Onuora, Samory I, Micah Shemaiah, Sylvan White, Cornell Campbell, Prince Alla, Lone Ranger, The Viceroys and Jamaican supergroup The Inspirators. Besides that they were the live backing band for Lee “Scratch” Perry, Cedric Myton, BB “Gaylads” Seaton, I Kong and Samory I, to name a few, they’re still at the helm of their own 2014 founded label named Fruits Records. Perhaps little known is that the band, formed by Léo Marin and Antonin Chatelain in 1997, have released a full length album of their own in 2011 – the LP “Musical Road”.

After many years having collaborated with others to full effect, Najavibes simply had to release a follow up to their debut album. And thus Najavibes recorded 14 brand new tunes for their sophomore studio album, which they titled “Same Sun”. It’s obvious that Najavibes since their first album have gradually polished a sound and a class that is instantly recognisable and firmly anchored in the roots tradition but drawing its dynamics from modern influences and the boldness of striking stylistic crossovers: afrobeat, rub-a-dub, jazz and new-roots.

The new Najavibes album opens with the very nice “Sun Light”, an ode to brotherhood which lasts for nearly 6 and a half minutes and might require several listenings to grow. It actually is the second longest song here as the gorgeous album closer and title track, “Same Sun”, clocks in at no less than 7m23s. This last track features an appearance from Aston Barrett Jr. – son of Family Man of Wailers fame – on keyboard. In between these two tunes there’s some really worthwhile material to fulljoy, starting off with the compelling reality tune “Insecurity”. Of the next three tracks, it’s in particular “Drivers” – a cautionary piece about not driving when you’re drunk – that instantly attracts attention. But also “Keep On” and “Not Only Lyrics” are tunes truly worth hearing.

The partly French sung “Parcours” with Rootwords & Jonas draws from seventies afrobeat, while the solid “Live With Respect” somehow reminds of Black Uhuru in the eighties. The message tune “Know Yourself” is a golden creation, for sure one of the album’s highlights. Next comes the matching “Love Revolution”, done in collaboration with great Jamaican singer Mark Wonder. It’s followed by another winner, the previously released single “This Dust” with former Raging Fyah lead vocalist Kumar. The ska-fueled “Sip A Glute” is a captivating piece dominated by great sounding horns. The nice instrumental “Catty Walk” preceeds the decent “The Treasure” on which Najavibes is vocally joined by Spanish maestro producer/engineer/multi-instrumentalist Roberto Sánchez.

Conclusion Mixed by Prince Fatty, the "Same Sun" album is a radiant, well varied collection of tunes that touches the heart and soul.