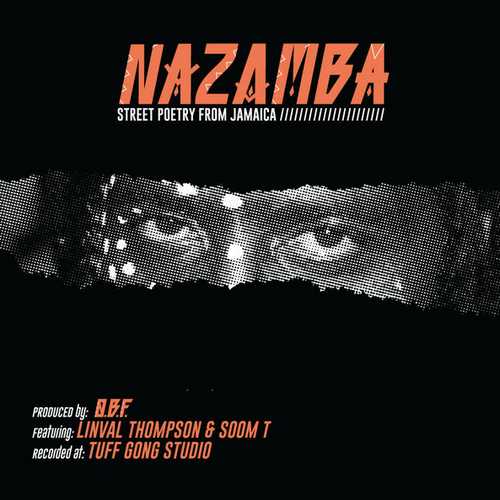 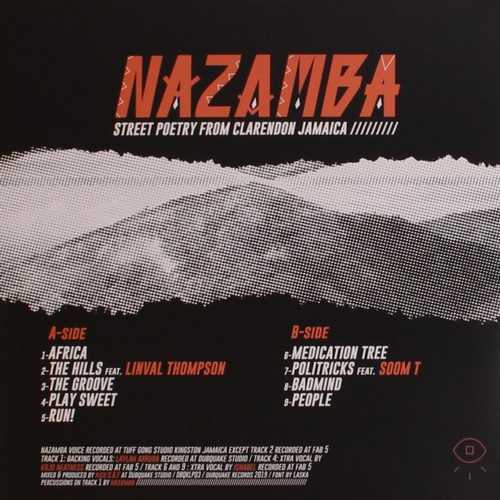 After the successful release of a four track EP, The Hills he unleashed his self titled album in May of this year, subtitled ‘Street poetry from Clarendon Jamaica’. The fitting backing is provided by O.B.F. which results in an expressive, authentic 9 track set, blessed with a thunderous bass that will blow your speakers when played too loud! O.B.F. adds space,echo and reverb where needed, and creates and excellent backdrop for Nazamba’s vocal headshots! The result is a breathtaking album with true authentic vibes.

The album opens with Africa, “Shaka Zulu Birthplace”. A sincere observation of Africa, Nazamba’s tribute to the motherland, a proud poem of a proud Jamaican featuring vocal snippets by Laylah Arruda. Then there’s the collab with reggae veteran Linval Thompson, The Hills. Linval’s fragile vocal delivery adds an extra dimension to Nazamba’s performance. The song tells about the hills of Jamaica as an ‘escape room’ where the dread flees to to get away from the hustle and bustle of the city. This song really showcases the raw emotion Nazamba.

The Groove is about “feeling the groove”. O.B.F. lay down an hypnotic backdrop, it offers a surprising glimpse into the small, hot and often humid Jamaican studios with its turbulent atmosphere. His dramatic vocal delivery on this tune make this sure fyah. Play Sweet uses the Drum Song riddim. Embedded in a dubby landscape Nazamba knows how to create a chillin’ atmosphere with the help of vocalist Kojo Neatness. Side One closes with Run!, a harsh and biting anti-crime statement. After the spoken intro the combination of flute, deep bass, Nazamba’s vocals and background noises the song grips you without excuse!

With Medication Tree Nazamba’s enters a more introspective mood, with background vocals by Ishabel. Politricks is a collab with Soom T, a tune almost drowning in valleys of dub! The theme is crystal clear and the music hits you without apology! On Badmind Nazamba’s vocals are surrounded by a whirlpool of sounds. There’s no melody, there’s a threatening riddim, meditation, and there’s Nazamba. Closing the album is People, again with backing vocals by Ishabel. On this tune he displays his views on ‘people’, a lyrical highlight on this album. A steady bass, basic percussion and sound effects lay the foundation for meditation pure and true.