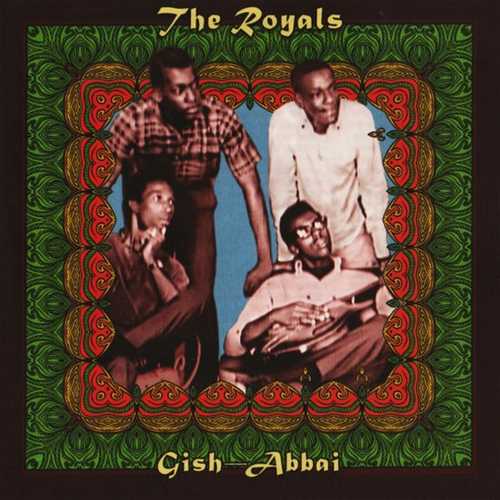 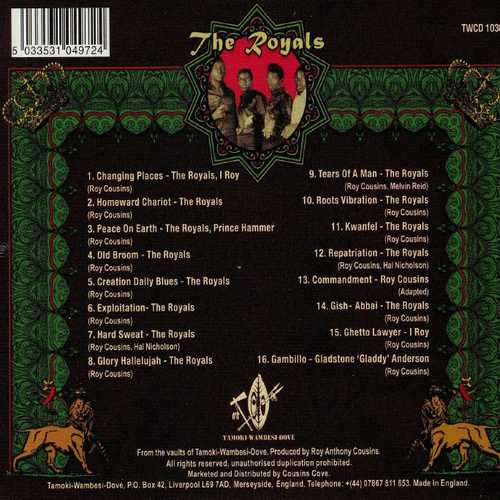 The fist incarnation of The Royals was formed by Roy Cousins in 1964 and included members Errol Green, Berthram ‘Harry’ Johnson (‘the only youth in the area with a guitar’), Trevor McFarlane and Maurice ‘Professor’ Johnson, who soon left to set up The Tennors. The group cut their first tune “House On The Hill” for Federal Records, but switched to Duke Reid’s Treasure Isle label and recorded “We Are In The Mood”. They met members of The Tartans, deejay Froggy (later known as U-Roy) and they did some rehearsals together. In 1967 The Royals changed their name to The Tempests after The Temptations and recorded some 8 tunes for Coxsone Dodd’s Studio One label but none were released at the time. Many years later Larry Marshall found that tape and released the classic tune “Pick Up The Pieces” after The Royals’ own version on Roy’s Uhuru label had become a hit. The bassline for “Pick Up The Pieces” has subsequently become one of reggae’s most versioned riddim tracks.

Errol Green and Trevor McFarlane left The Royals and were replaced by Errol Wilson aka Errol Nelson, Keith Smith and Ivan Renee, all from the Waterhouse district. They recorded some (unreleased) tunes for Joe Gibbs. Roy Cousins started to work for the parcel post division of the Jamaican Post Office in 1967, and kept recording for various producers, but it seemed to Roy that “whoever he record for they never release”, so his next step was to ‘do it yourself’ realising that the only way he could survive in the music business was to finance and produce his own recordings through his work at the Post Office.

His first self-productions were a new version of “Pick Up The Pieces”, the beautiful “Down Comes the Rain” and ‘a next song with Devon Russell’. Roy’s next two releases, an I Roy version to “Pick Up The Pieces” entitled “Monkey Fashion/Fashion Monkey” and “Down Comes The Rain”, came out on Tamoki. The Royals subsequent recordings all came out on Roy’s Wambesi imprint. It was going to be the name of the group. but instead their Cuban manager gave them the name The Royals as ‘every time we change the name it just wouldn’t work’.

Pick Up The Pieces

The group provided backing vocals for various artists and producers. The mid ’70s proved to be a peak of artistic creativity for The Royals and, with their own releases on Wambesi such as “Ghetto Man”, “Promised Land” and “Only For A Time”, they established a faultless body of work that few could ever hope to match, using Roy’s distinctive lisping vocal technique to its fullest. Their songs from this period were assembled for the “Pick Up The Pieces” album, a definitive high point in Jamaican close harmony singing, which was released in Jamaica in spring 1977. The Royals finally began to achieve a measure of recognition and the album was released in the UK on Mo Claridge’s Magnum label. The success of “Pick Up The Pieces” led to a deal with United Artists, with two more studio albums (“Ten Years After” and “Israel Be Wise”) following. Roy Cousins then had to undergo intensive eye surgery to save his sight, threatened by severe cataracts. He left The Royals and was replaced by King Tubby’s brother, Lloyd ‘Scunna’ Ruddock, and the group changed their name to The Jays.

Roy Cousins then increasingly concentrated on producing other artists. Throughout the ’80s he worked with an incredible amount of singers and deejays from his neighborhood including many of his long time associates such as Winston Jarrett, Devon Russell, Cornell Campbell, Prince Hammer, Gregory Isaacs, Prince Far I, Don Carlos, Winston Francis and The Gaylads and many up and coming stars of reggae music including Sturgav deejay Charlie Chaplin and youth singer Earl Sixteen. He also released a number of exquisite dub sets that further expanded the burgeoning Tamoki Wambesi catalogue. He eventually moved to Liverpool, England, and made the city his home. He continues to market his extensive back catalogue and is still active in a business that has yet to fully realise or appreciate the genuine qualities of his highly polished output.

Recorded at the finest studio’s in Kingston including Channel One, Randy’s and Dynamic Sounds during the period 1970-1981, most of the material presented on this album named “Gish-Abbai” (the title refers to Sacred Spring of the Blue Nile at Gish Abbai in Ethiopia) did not see any official releases back in the day. For these songs The Royals were joined by the cream of Jamaican’s session men named Forces Of Music, including Leroy ‘Horsemouth’ Wallace, Sly & Robbie, Earl ‘Chinna’ Smith, Sticky Thompson, Jah Bunny, Pablove Black, Skully Simms and Ernest Ranglin to name but a few.

For this album from the vaults of Tamoki Wambesi, Royals singer and producer Roy Cousins has revitalized some of his classic vintage tracks, added new instrumentation (saxophone, trumpet & flute) and gave them new titles. Examples of the latter are I Roy’s deejay cuts to “Pick Up The Pieces” from 1973, “Fashion Monkey” and “Monkey Fashion”, which are turned into “Changing Places” and “Ghetto Lawyer” respectively. The title track “Gish-Abbai” happens to be The Royals’ self-produced second version of their signature tune “Pick Up The Pieces”, while the group’s “If You Want Good” has been re-named “Old Broom”. And there’s Gladstone Anderson’s “Pride Of A Black Man”, the organ cut of “Pick Up The Pieces”, which here goes by the title “Gambillo”.

Although fiddling around with the titles of the tracks can make it a bit confusing, this 16-track album contains some great music. Besides the above mentioned tracks “Gish-Abbai”, “Old Broom” and “Monkey Fashion”, there’s an impressive extended version of the spiritual song “Swing Low, Sweet Chariot” called “Homeward Chariot”. It’s followed by “Peace On Earth”, the heavily dubbed up mind-blowing new version of The Royals’ 1974 tune “Promise Land”. Also worth hearing and thus going on repeat are the wonderful message song “Exploitation” and the moving “Tears Of A Man”. Remarkable to say the least is Roy Cousins’ “Commandment”, bringing to mind an artist like Prince Far I as he doesn’t sing the lyrics, but recites them.

Conclusion All in all an album with some great music to listen to.