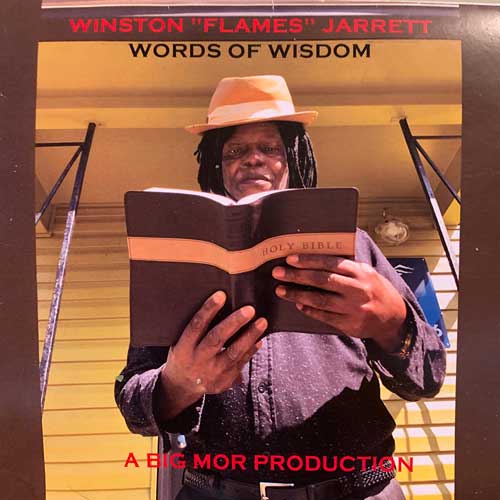 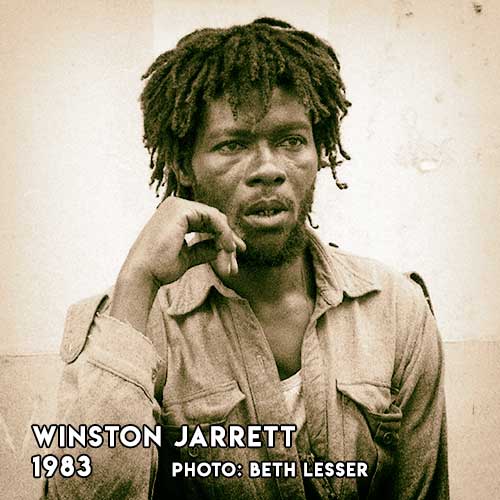 Winston “Flames” Jarrett. Volumes may be written about his absolute contribution to the rich history of Jamaican music. This Foundation statesman stands firm after six decades of timeless and poignant songs that are championed to this very day. A humble Rastaman that has left a Lion paw imprint on the three major evolutionary steps; from Ska to Rocksteady and Roots Reggae. “Flames” indeed. A JAH given fyah that burns bright within his Heart and Soul that has burned away the many trials and tribulations he has endured.

He possesses energy and vision of artistes half his age. From his outpost in Seattle, he continues to tour and record in triumphant nature. Mr. Jarrett is proud to present WORDS OF WISDOM. This is his 24th album and a superb showcase of old and brand new message music. Message music indeed; his compositions are absolutely some of the most classic, influential and observant songs in the history of Jamaica. This is a timeless testament of stunning gems carefully selected from his brimming musical vault and two brand new tracks recorded earlier this year. The atmosphere is elevated with versions that exemplify the caliber of musicians he has worked with.

The intimate documentary, True Born African gives invaluable insight into this wiseman’s career but it’s elementary to explore some more. Steadfast has always been his path. His vision to forward Winston Jarrett and The Righteous Flames (formed after Alton Ellis relocated to England in the late ’60’s) resulted in a Royal progression that continued well into the ’90’s. He’s worked for virtually every notable producer and riddim sections that provided the framework of The Golden Age of Reggae. Keen on the business side of the industry, he’s produced a slew of flawless work on his Human Rights and Humble labels. His catalogue is brimming with eternal feeling and Heartical breath. The Kingston Rock (1974) is an early example of his Earth tones elevated by The Wailers. Man Of The Ghetto (1978) is a glorious album with Zionesque harmonies from The Flames. Wiseman (1979) was the first release from Roy Cousin’s esteemed Tamoki-Wambesi label. He stayed the course and linked up with Nighthawk Records for the timeless Jonestown album (1989). He displayed his ability to stay current without trimming Roots and branches with Kingston Vibrations; a Roots Radics infused landmark from RAS Records (1991). Furtherment of his genius culminated in the ’90’s with albums produced by Alvin Ranglin and Jah Shaka. One might think this visionary would slow down….not a chance! After setting up his Bigmore Productions label, he’s released Bushwhackers Gangbangers (2010) and Family Affair (2012). Alongside Pablo Moses and Ashanti Roy, Winston stepped majestic on Natty Will Fly Again (2014); a result of his long link with Harrison “Professor” Stafford. The cycle of unity and livity is strong within this Rootsman.

WORDS OF WISDOM will certainly be another landmark release. A pure flowing album assisted by longtime Roots ambassador Oliver Albot, responsible for True Born African documentary. Winston recently spent time in Kingston, recording two tracks for the album. A blessed journey spent with Stranger Cole and Junior Green (surviving member of The Flames). Coptic Country opens the album in fine style, with Winston’s triumphant delivery resonating so true. He utilized a 1968 Studio One riddim created by Jackie Mittoo, Horsemouth Wallace, Leroy Sibbles and Deadly Headly. The version exudes the impeccable musicianmanship front and center. Big Bad Bwoy is a rare 1982 gem that Mr. Jarrett cut with Sly & Robbie. A massive version is a Rightful measure. Come Ah Me is a deeply Rooted gem created at Joe Gibbs in 1983. Straight from the vault with version galore. I Will Be Forever Loving You is the second new track recorded during his recent visit back home. A superb and Soul stirring classic created at Ken Boothe’s intimate studio with Robbie Lyn and other veteran musicians in Royal flow.

History revealing on Trust No Shadows Of The Dark. An absolute Roots message from 1976 presented on cd for the first time. Winston’s output was tremendous during this time, with countless singles of absolute purpose. Jah Jah Words is another flawless anthem from a 1975 Randy’s session. Once more, the version is a true reflection of singer and musicians in mutual respect. Gedsenemi originally came out in 2007 on a limited press 10″ with the great harmony trio Earth Messengers on the flip. Backed by The Arithmetic Band, Winston is on the mystic levels equal to the heights of Mt. Kilimanjaro. The tight version is the right equation! Love Of His Majesty has the power of his timeless True Born African masterpiece. A crucial Channel One episode from 1980. This stunning album closes with Wise Man. An utterly powerful choice from the Roy Cousin’s produced album of the same name. A rich and early Roots Radics backbone that Winston voiced at King Tubby’s. The Scientist driven version is the icing on this track of Kingly character.

WORDS OF WISDOM is a continuation of the legacy of WINSTON “FLAMES” JARRETT. His music is cherished all points; north, east, west and south and continues to flourish in the mindset of conscious people around Creation. A compelling collection of unreleased, rare and brand new tracks that will delight fans, old and new. Put this musical disc in heavy stereo and the ital essence of this enduring messenger will resonate for years to come. I give thanks to Winston for the unconditional Love and Respect over the years and the wisdom he has taught. 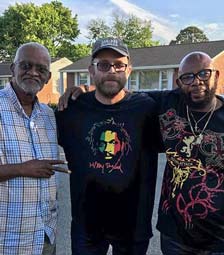