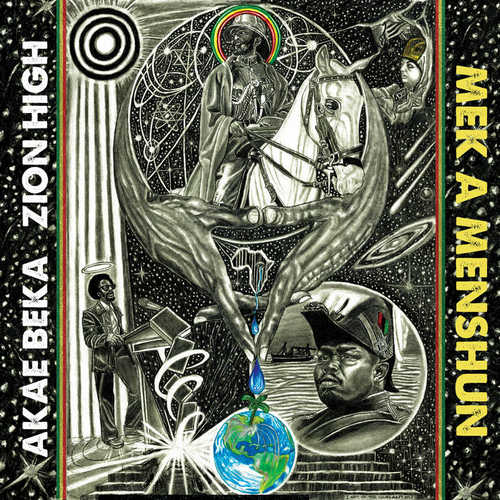 In terms of numbers, Vaughn Benjamin’s run of works with Midnite and Akae Beka can easily be compared with high prolific Jamaican artists like Gregory Isaacs and Dennis Brown, but when it comes to the quality of the music presented on a staggering amount of more than 60 full length albums, one has to conclude that the output of this noted lyricist and vocalist has much more consistency than the aforementioned reggae superstars. Quality and consistency are also keywords for the well respected Zion I Kings (ZIK) collective, a family of producers and musicians from three respected roots production houses/labels: Zion High Productions, I Grade Records and Lustre Kings Productions. During the past ten years or so they’ve built a catalog that includes sublime artist albums from the likes of General Jah Mikey, Glen Washington, Cornell Campbell, Lloyd Brown, Ziggi Recado and Arkaingelle, and noteworthy compilations as part of their “Riddim Series”. And now, three years after the release of Akae Beka’s mighty “Livicated” (the very first collaboration of Midnite/Akae Beka and Zion High Productions, which actually became the best-selling album of the label), there’s a worthy follow-up album out on the streets titled “Mek A Menshun”.

Sonically the new album sounds fantastic from beginning to end not least due to the players of instruments who were involved in this project. It features the stellar musicianship of the ZIK distinguished in typical fashion by the rock-solid drumming of Lloyd “Junior” Richards, whose playing is complemented by Aston Barrett Jr. (“By Day”, “Reason”, “Only Now”) and Kirk Bennett (“Chemistry (Kagm Mystory)”, “Mek A Menshun”). The signature stylings of the other core ZIK musicians are augmented by horns with Andrew “Drew Keys” Stoch on trombone and Donald “Jahbless” Toney on saxophone. Furthermore there’s Sheldon “Attiba” Bernard on flute, Andrew “Bassie” Campbell on kette, and Chet Samuel on guitar. ZIK guitarist Andrew “Moon” Bain contributes a string arrangement on “Only Now”. Throughout the album, Laurent “Tippy I” Alfred’s spot-on organ shuffle bubbles the riddim forward. Also worth mentioning is the fact that many of the tracks on this album were among the last recordings done by Gary Woung, the veteran sound engineer who engineered for Third World and many other international reggae artists as well as other acts.

After several listenings it’s obvious that Vaughn Benjamin, who has always had a touch of Twinkle Brothers’ Norman Grant in his vocal style, reaches new heights of melodic delivery and emotional intensity in his singing on the 12 original songs of “Mek A Menshun”. Not only the always poetic and insightful lyrics makes him unique, but also his stringing together ideas and concepts into songs and making it seem all so easy is part of his uniqueness. As always, the listener is treated to songs that are so deep, full of passion and reason. It might imply that some of the songs just need a little bit more listening to find out he’s talking about something else than you thought at first hear. However, that’s not a hard thing to do when you have such a great work at hand.

“Under The Sun” is a very convincing album opener, not least because it has so much going in terms of vibes and mood. It’s followed by the gorgeous “By Day”, which is taken to even higher levels by the scintillating horns of Andrew “Drew Keys” Stoch and Donald “Jahbless” Toney. Without any doubt this is one of the album’s highlights. Rounding out the first quarter of the album is “Chemistry (Kagm Mystory)”, another strong effort that leaves a serious impression. Definitely a great way to start off an album! At first hear “Mek A Menshun”, featuring guest vocals by Protoje, doesn’t come as a legitimate winner. However, this title track is the kind of tune that requires a bit of time to grow and then… BOOM!! No weak tunes to be found among the eight tracks that follow, but only efforts that will get two thumbs up from longtime Midnite/Akae Beka fans and most likely will be fully appreciated by those who are into roots reggae music in general. Arguably those that stand out include “The Mighty”, “Into Law”, “Veteran Of Narrative” and the album closer “Only Now”.

Conclusion A truly forward and excellent new collection of tunes from a true reggae phenomenon.