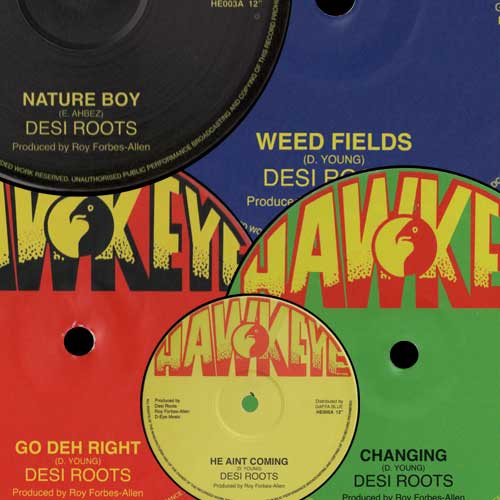 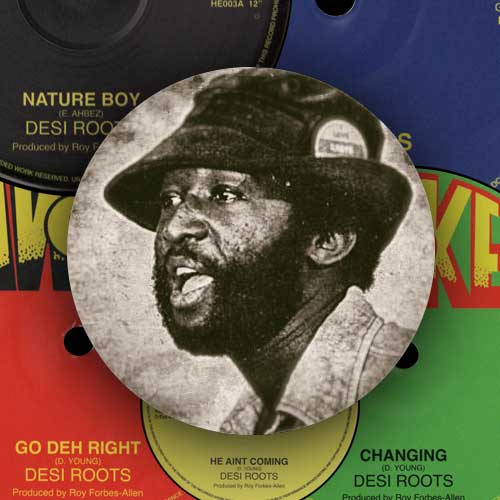 Desi Roots aka Desmond Young is one of those talented, but rather obscure and neglected singers from Jamaica. Born in Kingston, he was a member of the famous Now Generation Band. He also provided backing vocals for a number of albums, including the 1976 Inner Circle album Reggae Thing. At the end of the 1970’s he embarked on a solo career. He released several quality singles and in 1980, on the British reggae label Hawkeye, he released his debut set Doing It Right. It was a co-production of himself and Roy Allen-Forbes of Hawkeye Records. The excellent album was recorded at several Kingston studios and featured the top of the line musicians of that time. On this album you’ll find four titles of the 12 inches: Weed Fields, He Ain’t Coming, Go Deh Right and Nature Boy. The follow-up album came in 1982 and was called Children In Exile. This one was also a co-production on Hawkeye Records, but recorded at the Dynamic Studio. On this record the fifth title is featured, Changing. After this period he occasionally recorded a tune and did some backing vocals. Later he became president of the Jamaica Federation of Musicians, an organization now called Jamaica Federation of Musicians & Affiliates Union (JFMAU).

The year 2018 saw the reissues of no less than five 12 inches by Gaffa Blue. Gaffa Blue gained his knowledge at Dub Vendor’s, the renown record shop where worked for 15 years. He’s the owner of London-based Nasty Rockers Sound System and one of the most versatile selectors. He licensed records from JA and UK producers and with his company GB Distribution he distributed Reggae music in the UK. Recently he founded a record label that carries his name.

The brilliant roots ganja anthem from 1979, Weedfields, is Desi’s wicked adaptation of the old Four Brothers hit Green Fields. Captivating tune backed with Scientist’s fitting dub reworking, a tune that also can be found on the LP Dub Duel. One of Desi’s best known tunes is Go Deh Right, originally issued in 1979. This roots classic really showcases the musical and lyrical qualities of Desi Roots. On the flip side we hear Scientist taking over in crucial dub style. Desi Roots has always offered impeccable work and his reworking of Nature Boy proves it once again. The song, perhaps best known from Nat King Cole’s 1950’s hit, is lifted from LP Doing It Right. Revolutionaries provide a solid backing and a noteworthy dub! Then there’s the uptempo song Changing, originally found on the LP Children In Exile. It’s the first time release as a 12″, backed with a solid dub. He Ain’t Coming is also a first time release as a 12″ and adds a previously unreleased dub version. The flipside brings Jeremiah Special an overwhelming dub excursion lifted from the aforementioned Dub Duel set.

Conclusion Ignore at your peril!