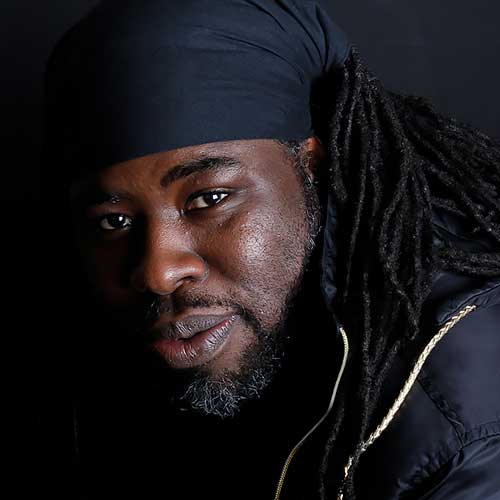 Solo Banton started deejaying at the age of 12 on his brother’s sound system King Shamma International calling himself Professor Brown. At the age of 19 he became Majestic Sound’s soul selector and also started learning how to produce music in a studio. However it still took nuff years before Solo Banton — after having established a friendship with Kris Kemist from Reality Shock Records — became a recording artist, scoring hit after hit with songs such as Talk To Me, Walk Like Rasta, Old Time Something and Chalice Haffi Blaze.

Finally, in 2010, his debut album called Walk Like Rasta hit the streets. The album Higher Levels came out in 2012. Since then he a has been touring extensively ad recorded several good tunes. Last year he was featured with the tune Herb Inna Mi Pocket on the Bass Attack album from Manudigital.

In 2019 he once again teams up with Kris Kemist from Reality Shock Records for the Old Raggamuffin album. Kris is the founder of this independent record label which he founded in 2003. With a studio of his own, specialising in reggae music, Kris has worked with names such as Fred Locks, Luciano, Mikey General, Sizzla, Errol Dunkley, Tippa Irie, Errol Bellot, Speng Bond, Jah Screechy & many more

It’s a twelve track set on which we seen him collaborating with UK’s veteran roots reggae deejay Macka B (one of Solo Banton’s influences). Their tune Edutainment was the first single from the album, a typical UK deejay tune finding both artists delivering their positive lyrics about education through music across a hard hitting riddim. For his rootical track Universal Language with veteran reggae vocalist Earl Sixteen he slows down the pace.

The fragile vocal delivery of Mikey General combines very well with the rougher deejay style of Solo Banton and makes Wickedness Trending nothing less than an excellent roots track! Tasty horns section too! Empress Sabrina Bell has been making a solid impact on the scene for a few years now. With her soulful approach she shines alongside Solo Banton on the bouncy track Transitions & Changes.

The past faced tittle track opens the set with power and urges for an immediate rewind! With Take Aim Solo Banton combines rub-a-dub vibes and dancehall peppered with powerful lyrics. One of our favorite tunes here must be Sleep Walking, underpinned by an addictive riddim and angelic harmony vocals! Set to a transparent musical backdrop First World Problem is an eye opener for all who keep complaining about non-essential matters instead of dealing with the real problems.

Akward with its stubborn riddim tackles the theme of accepting and being proud of yourself. The 200% positive vibe of Smile Every day speaks for itself…we totally agree! Musically album finisher Rolling Stone reminds us of Dennis Brown’s classic Promised Land. When he sings “once I was a rolling stone, but no more shall I roam” it’s obvious he’s longing for peace of mind, for rest, for a place of his own.